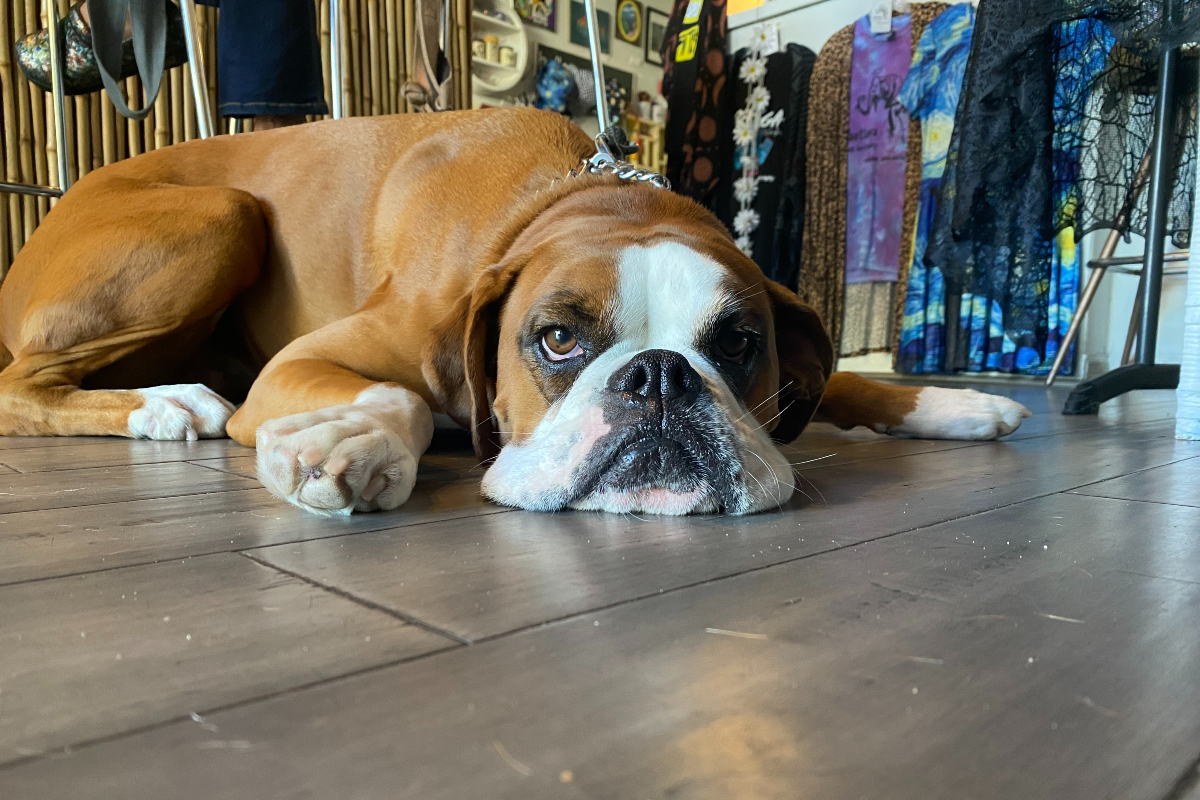 Accustomed to living on my own, the inaugural weeks of pandemic isolation seemed somewhat redundant. As the months wore on, however, the magnitude of the solitude — dawn to dusk aloneness, both inside and outside the home — was tough to bear.

And so, I became a foster parent of an anxious, excitable boxer with searching eyes and a lot of slobber. Toula had been rescued from life on a chain, left alone for days at a time with no food or answers. PTSD leaves a mark on dogs, the trainer told me, and Toula had some work to do. But she was eager to please.

There was togetherness on fuzzy blankets and furry throws, and watching her chase sunlight brightened the darkness. When Toula left for a trial adoption, I missed her big presence and fervent, committed wiggles.

Toula missed me too. When she came back to me, romantics said we were meant to be. “She came back because she’s a tough dog to adopt,” said my oldest sister, owner of five shelter dogs and a realist about rescue dogs with issues.

Regardless of her past, I couldn’t picture a future without her. We were having too much fun with throw pillows. I signed the adoption papers.

Cesar Millan says the working group of canines need a job to do, so I got Toula a backpack, and she carried her own water.

And yet, she rarely drank her cargo. Toula prefers to drink from her neighbors’ bowls.

Coffee shops are always on my agenda, and Brooklyn Café on North Fourth Street looked inviting. Out front, a dog bowl beckoned, but Toula smelled something more interesting inside.

She sat for the treats and then splayed across the floor, a languorous placement of jowls and limbs. Rod and I spoke of Willie concerts and the state of the world, including my classroom’s shift to in-person learning. He snapped a Polaroid mini of Toula and pinned it to the wall, part of a growing collection of canine glossies that decorate the archway over the cream and sugar station.

Several blocks and unbridled sunshine later, we reached Savorez, on the corner of Chestnut and Fourth. One of my favorite downtown eateries, it had been several years since I enjoyed the colorful ambiance and flavor. Outside the entrance stood a large jug of water, and a dog bowl waited nearby. Toula moved to drink, then paused to consider a woman on a nearby bench.

“She likes to look around,” I explained, “kind of take it all in.”

“I should do that more often,” said the woman, with a smile. She was a flight attendant from Colorado, and her needy pug pouted at least two days before a shift. Sensing a kindred spirit, Toula leaned into her.

“She’s the prettiest boxer I’ve seen,” said our new friend, pointing to the white markings, or flash, that decorated Toula’s paws and forehead.  “And so well-behaved!”

As the trainer told me, Toula had come a long way.  She was working on her issues, I realized, and helping me with mine.

On our way back, I noticed two small dog bowls outside an unfamiliar storefront. Toula stopped to investigate. Three faces peered through the window of Dalisay Hair Salon, then beamed with pleasure as Toula stared back. One of the hairdressers waved her arms, as though hailing a taxi, and beckoned us inside.

“Look at the smoosh face! Oh my god, I love boxers,” said El MOREA, updo guru and hair stylist. She crouched down for a closer look, and Toula straddled her knees. 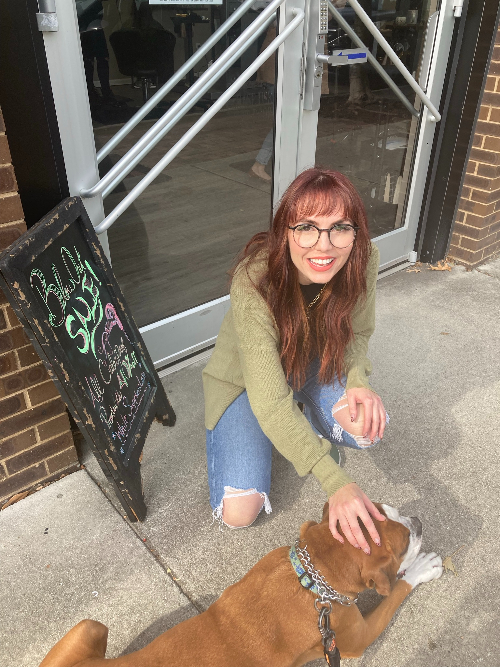 “Of course she’s a lap dog,” Morea exclaimed. “All boxers are!” When her boxer passed away, Morea rescued another one. There was an eighteen-year-old Chihuahua named Daisy Duke, and the lucky new boxer was Marty McFly. Instantly at home in a room filled with stylish ladies and soft rugs, Toula became some sort of shop mascot. Dalisay was her palace, and she was its queen.

Needless to say, Morea became my hairdresser, and Toula stares into the window until someone puts down their blow dryer and comes to say hello.

Boisterous laughter boomed through an open doorway, and Toula pulled toward the sound.  It was Bottega Art and Wine, and sound was AlPhonzo, the barkeep. The more he bellowed, the calmer she grew; the louder AlPhonzo sang, the more Toula melted into the floor. Spirit animals; or separated at birth? Whatever the pull, AlPhonzo and Toula are connected. “What up, dog,” he said, and her nub whirred like a prop plane.

“Hi, Toula,” called a voice inside Boombalatti’s. The ice cream shop had become Toula’s first stop along our two-mile route, sort of a warm-up drink before we hit the main drag.

Busy days of teaching and grading meant early morning runs and training sessions on the front lawn, and it’d been a week or so since our last leisurely stroll. I was looking forward to seeing Toula’s favorite bartender.

Toula wiggled to the rhythm of his voice, but AlPhonzo didn’t look over.

“I hear about you, Dog, all up and down the street, sipping from Savorez’ dog bowl. People are like, ‘Toula? Yeah, we know that dog. She just drinks from our bowls and walks on by…’”

AlPhonzo shook his head, and we both laughed.

“Come here, dog,” he said, reaching for her. A conversation starter and a reason to keep talking, Toula was easing us back into the world.

AlPhonzo turned up the music, and Toula closed her eyes.