When MELANIE SMITH’s dream of owning a bakery became a reality with the launch of Sweets & Spirits in 2016, it was not long before both she and her husband Robert began putting on weight and experiencing a variety of health issues.

It was clear that the high levels of sugar, fat, and carbohydrates they were consuming as she experimented with new confections were negatively impacting their health.

As a former nurse, Smith knew a change had to be made. The couple put their nearly 60 years of combined experience in the medical field to work and began researching the ketogenic diet, more commonly known as keto.

They made the decision at the start of 2018 to give it a try, and she and Robert began noticing positive changes almost immediately. But she was conflicted about adopting this new, healthier lifestyle while still providing her customers with traditional carbohydrate and sugar-laden baked goods.

On top of that, it was difficult for Smith to experiment with new recipes, one of her favorite parts of the job, because sticking with keto means one must keep carbohydrate and sugar intake very low.

“I really felt like I was doing a disservice to my customers,” Smith says.

Smith began working diligently in her home kitchen, which she refers to as “the mad scientist lab,” to create keto-friendly versions of some of her most popular baked goods like cinnamon rolls and donuts.

“I love the experimentation and I love the chemistry,” Smith says. “It taps into my background in nursing.”

Smith would eventually decide to transition from a traditional bakery to one that is keto-friendly, gluten-free, and sugar-free in order for her business to match her newly adopted lifestyle.

“I don’t deprive myself of anything, but I’ve changed the way I look at food and now I view it as fuel for the body.”

Smith has dedicated herself to creating recipes for everything from bagels and bread to pies and cakes that offer the same satisfying experience as traditional baked goods.

“It’s been a ton of trial and error,” Smith says. “Believe me, there has been plenty that has hit the trash can. It will ever be exactly the same as what I call ‘the bad stuff,’ but I want it to be as close as I can possibly get it. That’s the key to making people feel like they’re not being deprived.” 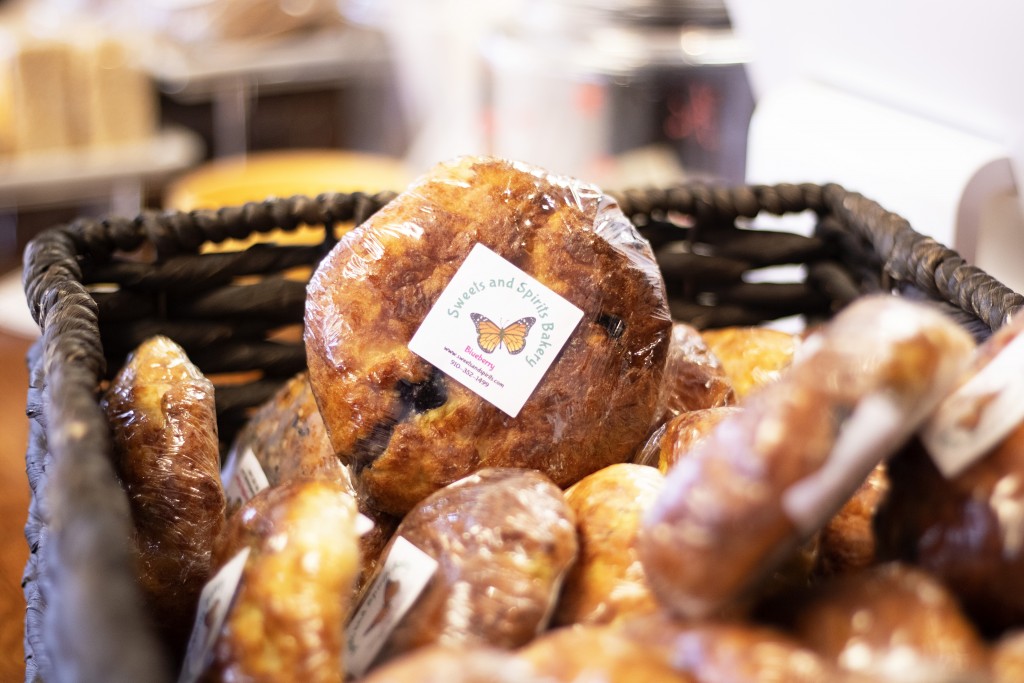 Smith’s business is growing by leaps and bounds – she now ships baked goods nationwide and has outgrown her space at the Burgaw Incubator Kitchen.

Now, Smith is working amidst the coronavirus to open a brick-and-mortar store at 234 E. Main St. in Jefferson, North Carolina. She is currently hiring baristas and bakers through Skype interviews.

“I am working hard to update and ready the shop in Jefferson so we can get inspected. Once inspected we will start baking immediately,” she says. “Currently, I am scrubbing everything in the shop to ensure that once open, we put the safety of all of our customers first.”

With the purchase of a transit van, Sweets & Spirits is now able to transport goods to all current Wilmington locations that carry its products and serve the whole state.

As demand for keto-friendly products grows, Smith is focusing on expanding her offerings to include a version of no-oat oatmeal known as “noatmeal,”, and a granola, which she likens to Grape Nuts.

“While the keto baked goods are popular, I also want to be able to provide some mealtime options,” Smith says.

While cinnamon rolls remain the bestseller, right behind those are hamburger and hotdog buns and bagels.

“For someone to be able to have a burger on a bun, rather than wrapped in lettuce, is huge,” Smith said. “I now feel like I’m really making a difference and that’s very important to me. It’s why I became a nurse years ago.”

The keto-friendly, gluten-free buns are currently served at Slainte Irish Pub in Monkey Junction, and other Sweets & Spirits baked goods can be found at local coffee shops such as Grinders Caffé, and Old North Coffee.