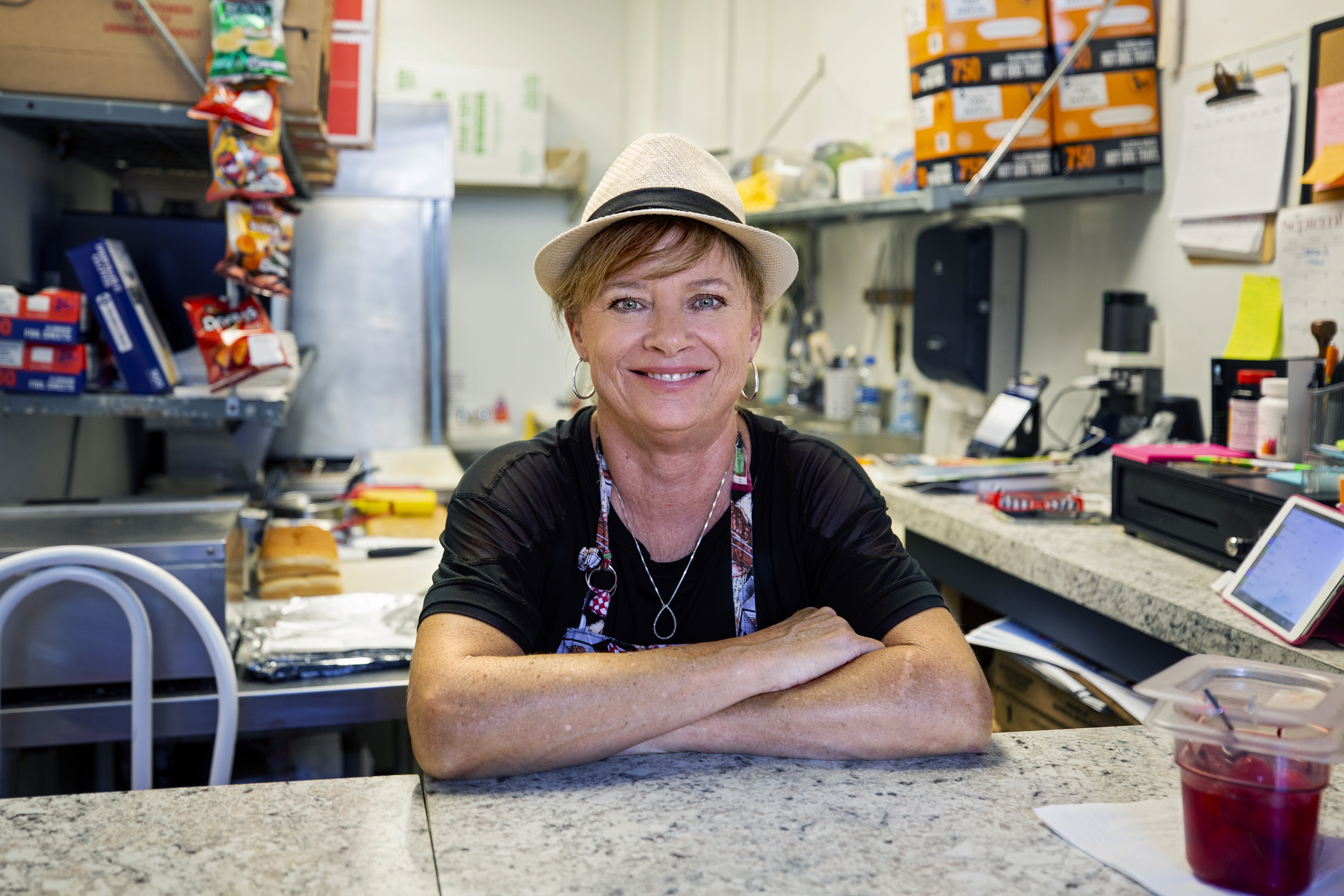 There seems to be an ongoing debate about who invented the hot dog.

Was it the Germans who lay claim to the frankfurter? Or, the Austrians who created the wiener? Or, maybe it was the German immigrant butchers, who say their dachshund sausage was the first hot dog?

While the exact history might never be known, these stories add to the hot dog’s appeal as one of America’s favorite foods.

For MARY GARNER, owner of LOUIE’S HOT DOGS located at 204ó Princess Street in downtown Wilmington, the appeal of hot dogs is twofold as she has owned the eatery not once, but twice.

Louis North worked a simple street cart on the beach when he decided to open a hot dog business in 1989. The storefront that became Louie’s Hot Dogs was originally a shoe shop and several other businesses. In 2000, Garner bought Louie’s and over the next eight years, she established a thriving business. The economy was great until the recession hit. Garner sold Louie’s in June 2008, but was unhappy with new jobs she tried.

Garner’s heart was with Louie’s.

Five years later, she made a phone call. Garner vividly recalls the conversation with the then-owner of Louie’s.

“You are the Mary who previously owned Louie’s? Everyone talks about you,” she recalls him saying.

Garner was immediately hired into a management position. In 2015, she jumped on the opportunity to purchase Louie’s again.

“I put a sign outside that simply said ‘Mary’s back.’ People came in laughing, dancing, and crying,” she says, “I kid you not!”

Garner has a bachelor’s degree with a concentration in food and nutrition from State University of New York College at Oneonta and twenty-five years of work experience.

“Both helped me with my business,” she says.

The menu at Louie’s is amazingly curious. Every signature dog has its name, and every name has its story.

The most popular dog is the Mr. Brown, named for a retired veteran who worked at Louie’s for many years.

The Bellamy dog is a joint creation between Garner and a local doctor who frequently came to Louie’s to chitchat. He told Garner how sad it made him when he had to tell a family about a death. After he stopped practicing medicine, he started volunteering at the Bellamy Mansion Museum.

“One day, our chitchat turned to deli mustard, horseradish, pepper relish, and onion. Together, we established the Bellamy,” Garner says.

The list of signature dogs goes on. There’s the Lieutenant named after Lieutenant T. Vernon, of the New Hanover County Sheriff ’s Office. And, the Mayor Bill Saffo that Garner serves to Saffo without onions on days he has meetings. There’s the Yo Adrian with cheese, bacon, and pulled pork named after a gentleman named Adrian.

“Customers say it like in the Rocky movie when they order,” she says.

Louie’s original dogs are all named after places in Wilmington such as Front Street, Cape Fear, and Jacob’s Run.

“Because I am my own boss, I can name my dogs,” Garner points out.

Most of Garner’s customers are repeat locals who know what they want before they walk through the door.

“I am lucky to serve them for so long. I enjoyed their grandparents, their grown children, and now their children,” she says.

While the most popular toppings are mustard, chili, red onions, and coleslaw, Garner loves all her customers and caters to their peculiarities. “One regular customer likes a spoonful of sugar on top of her chili dog,” she says.

She no longer thinks about opening another brick and mortar.

“It’s not necessary with delivery services. My dogs get delivered in Wilmington and Leland,” Garner says.

She does think about the next big trend in her business. She recently started Louie’s Pop Up Hot Dogs.

“I go to a local business, pop up the canopy, hang a big banner, fire up the grill, and serve dogs with all the fixings,” she says.

Every dog has its day. For Garner, that day has come.

“This hot dog joint is a one-on-one business,” she says. “I’ve learned something big about myself. I love to put a smile on a face. I thrive on my customers.”