To Lebanon and Back

Marla Rice-Evans lives her dream and makes a difference

“I was turning 59 and felt like I needed to do something else. If some place would want me somewhere to do something good in this world, I needed to go”, said Marla Rice-Evans, explaining her adventurous career decision in 2014 to become vice president of Lebanese American University (LAU), a job that would require a move to New York City and frequent travel to and from the Middle East.

Good in this world, especially that part of the world, she did do. In just three and a half years as an LAU vice president, Rice-Evans led a $100 million campaign that exceeded its goal and she secured numerous scholarships for students who would otherwise never have had the chance to go to college.

“Students to me are students all over the world. We have boundaries, we have different cultures but we are all in this together,” Rice-Evans says. “Whether it’s a student in a village in a remote area in Lebanon or a student in a rural area here, the first to go to college in their family, same thing,” she says.

Rice-Evans, a former associate vice chancellor at UNCW and scholarship donor, worked nearly 40 years heading non-profits and fundraising at universities, never once getting to use her beloved undergraduate major, French. That was, until she found herself in the throes of her role at Lebanese American University.

“So, I get this job and I’m hired to manage people in a country I don’t know with a staff that speaks Arabic, English and French, often in the same sentence,” she says. 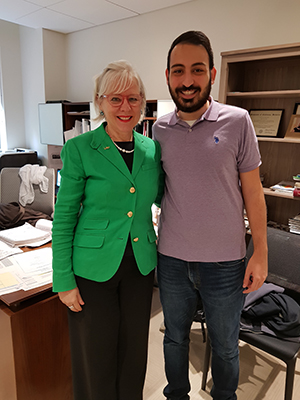 “Who would guess that when one is 59, one would so need that one thing one so loved,” Rice-Evans says with a laugh.

LAU’s head office is in New York with campuses in Beirut and Byblos, a small town that means “Bible” and home to where the very first alphabet was created. It started as a girls’ school in 1835. Today LAU is a thriving university with more than 8,000 students.

Because Lebanon is near the Fertile Crescent, produce abounds. Rice-Evans grew to favor persimmons and fattoush salad throughout her 20 trips there.

Some interesting factoids about Lebanon: It can fit into half of Connecticut; it has the same climate as Wilmington, just a little warmer; there are 17 different religions and the people for the most part, says Rice-Evans, get along well; and Skype works better from Wilmington to Lebanon than from Wilmington to New York, she confirms.

“One young woman who works at the university said to me, ‘All of you Americans, you just think we’re still on camels, don’t you?’ I said, ‘Well, some do, honestly.’ She said, ‘it breaks my heart,’” Rice-Evans recounts.

Hassan Jebai, an economics major with a high G.P.A., was able to study for a semester in New York City, thanks to a scholarship Rice-Evans coordinated. It was her favorite accomplishment.

“The donor came as a young man to the United States and it changed his life. He wanted to give that experience to someone else,” she says.

Rice-Evans is now back home working for LAU from Wilmington and enjoying being in one place.

“I wanted to help make things better there,” she says.  “That’s all I wanted to do; I’m at peace I was able to do that.”