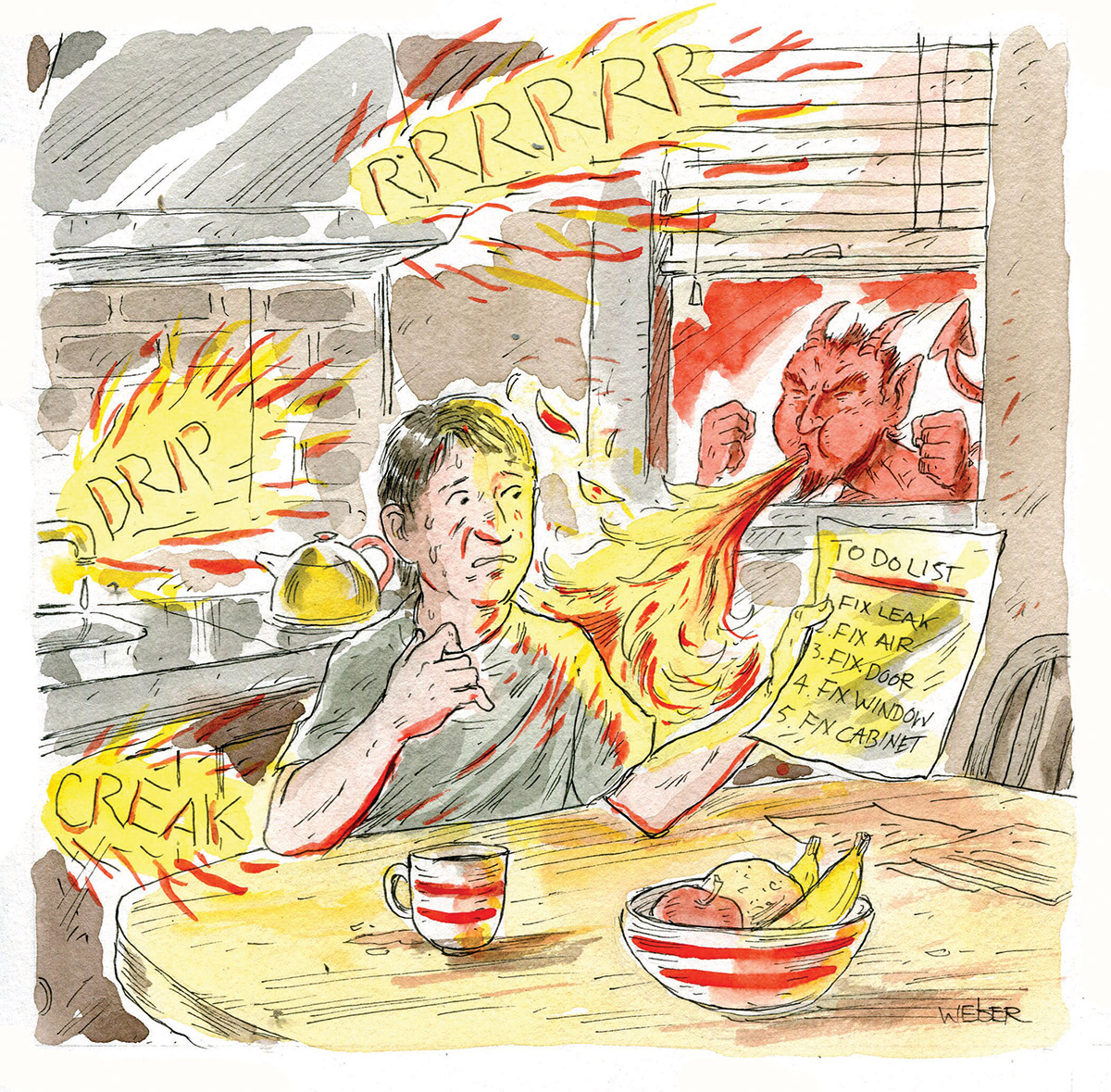 At this moment, a ladder stands in my living room, blocking the back door until I climb up and hang a picture of an owl that has been perched in my way for a week.

The owl will have to wait, though, because first I need the ladder to replace a bad window that was a replacement for the original one.

I’d get that done pronto, except for the loose air vent keeping a constant rattle right above my head. It’s like psychological torture.

I’m tempted to drag the ladder in here and multitask: snatch out the air vent, throw it through the faulty window, and cover the ceiling hole with the owl picture. Instead, I’ll just add these chores to the long list of Things I Need to Get Done Around This House.

A friend told me that a smart real estate investment is to own the worst house in a great neighborhood. I have managed that. My front door has a gap wide enough for a robin to fly in. The foyer light fixture has been outdated since the house was built in 1994. A medicine cabinet needs a dose of tightening to the wall. Flush a toilet here, and the region’s water table drops six inches.

This place suffers from hasty construction, building materials charitably called “contractor grade,” and a previous owner who let one of his friends do repairs. The friend clearly was a jackleg of all trades. He didn’t let building codes and common sense hinder his creativity with wires, boards, pipes, and anything else that could go wrong and destroy the house. I keep having to pay licensed professionals to unfix his handiwork.

“What happened here?” an electrician asked.

“The last owner hired a friend to do the work,” I said.

“Should be in prison,” the electrician said.

“The owner or the friend?”

In home-repair terms, that means, “I’m going to rescue you from this reckless wiring job, and the real shock will come from the bill.”

After nearly two decades of living in this house, I’ve come to understand that it’s a lot like me: not so feeble that it should be bulldozed, but still creaky and needing dedicated attention. The house is twenty-eight years old. Maybe that’s the age for house things to go kaput, but I don’t see any excuse for it. When I was twenty-eight, I had a fun job, a gas-saving car, and freedom from the hassles of the internet, which hadn’t been invented. My house should still have all its hair, a trim waistline, normal cholesterol, and no need for reading glasses, compression socks, colonoscopies, or help getting out of a comfy recliner.

Then again, Jimi Hendrix never made it to twenty-eight, and neither did Janis Joplin or Robert Johnson. Maybe the corner-cutting builder who threw my house together made a deal with the devil, and now the debt is mine to pay. It’s not supposed to work like that, but here I live, down at the crossroad of bad design, a long to-do list, and the ghost of the fixer friend who did more harm than good. As the song says: Baby, I’m sinkin’ down.

And as I say: Baby, I’m climbin’ up that ladder. This house is giving me the blues.

Tim Bass is coordinator of UNCW’s bachelor of the arts program in creative writing.