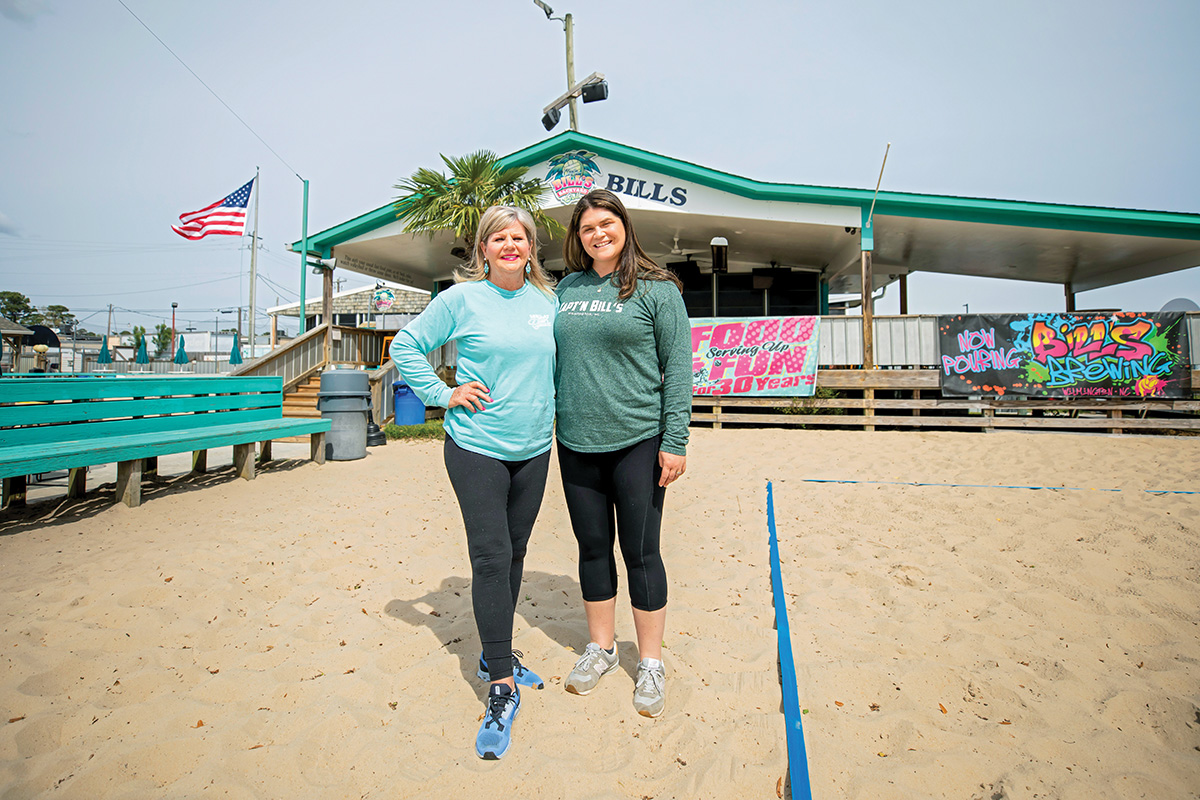 Capt’n Bill’s Backyard Grill might be a well-recognized Wilmington icon, but family is at the heart of the continuously growing venture.

The restaurant is currently run by the mother-daughter duo, ERIN and BROOKES MUSSER. Erin and her husband, John, came to Wilmington to open up a new franchise location for 220 Seafood. In 1992, it was time for a change.

The Mussers had family members who played beach volleyball competitively, and as luck would have it, the owners just so happened to have a large plot of undeveloped land behind their restaurant. This became the beginning of Capt’n Bill’s, now celebrating its thirtieth anniversary this year.

“We decided to clear the lot and put a small walk-up counter, full kitchen, and bar on-site with four sand volleyball courts and horseshoe pits,” Erin Musser says about the early days.

From there, both the restaurant and their family grew.

Before long, two daughters, KAITLYN and BROOKES, were added to the family. Brookes was seven years old when she started “working” at Capt’n Bill’s. She was offered a small amount of money (a penny) at the time to help clean up the courts. At fifteen, she became a server as the service at the restaurant grew. Brookes, now thirty-seven, works alongside her mother at the restaurant.

Now, she is experiencing much of what her mother did, as another generation is being introduced to the family business. After bringing her newborn son to Capt’n Bill’s in recent years, she now appreciates her mother raising her and working at the same time.

“I have loved working with my mom, as I too have recently become a mother,” Brookes Musser says. “I never realized how hard it would be, so being in it with her now makes me look at her differently. She’s a rockstar.”

Erin Musser would not have it any other way.

“We do butt heads but only because we’re family and comfortable with each other,” she says. “It’s nice to see my daughter step in, and we love having our grandson around the office. It reminds me of bringing Brookes and her sister, Kaitlyn, to the office with me.”

Four volleyball courts have now grown to ten, and the business is home to the Wilmington Volleyball Series and hosts tournaments as well as league play. But you can’t forget about the food.

“The restaurant aspect of Capt’n Bill’s grew from our background with fried seafood and barbeque,” Erin Musser says. “A lot of people do not know that we offer a full menu with sandwiches, wraps, house-smoked pulled pork, fried chicken, and fried seafood plates.”

An all-you-can-eat oyster bar is offered during the winter months. Capt’n Bill’s has become known for its fried chicken and smoked pork, which is served with Bill Musser’s original barbecue sauce. A menu favorite is the slop burger. Topped with cheese, chili, lettuce, and the usual fixings, the item has been on the menu since the first day of business.

In addition to in-house dining, the business offers a catering service. John Musser continues to cook for family reunions, birthday celebrations, and a variety of other events serving up to 200 people.

Capt’n Bill’s reputation in Wilmington might be due to its food and sports activities but also because of its strong connection to the community. Since the beginning of the business, the Mussers have collaborated with over twenty nonprofit organizations to run benefit volleyball tournaments every year from March to November.

“We’ve easily raised close to $1 million over the years,” Brookes Musser says. One special annual event is the A Day to Remember tournament, which raises money to help groups supporting Alzheimer’s research.

The motto “Keep it in the family” is certainly true at Capt’n Bill’s.

Bill’s Brewing is part of the business and managed by Brookes’ husband, Donnie. Added in 2016, the brewery includes a large roster of beers. A taproom provides space for hosting an event and is equipped with pinball machines, eight televisions, as well as a projector. Bill’s Brewing also purchased the warehouse behind Capt’n Bill’s.

“We plan on converting it into a production facility that comingles with Capt’n Bill’s,” Brookes Musser says.

The project is anticipated to be completed by summer 2023.