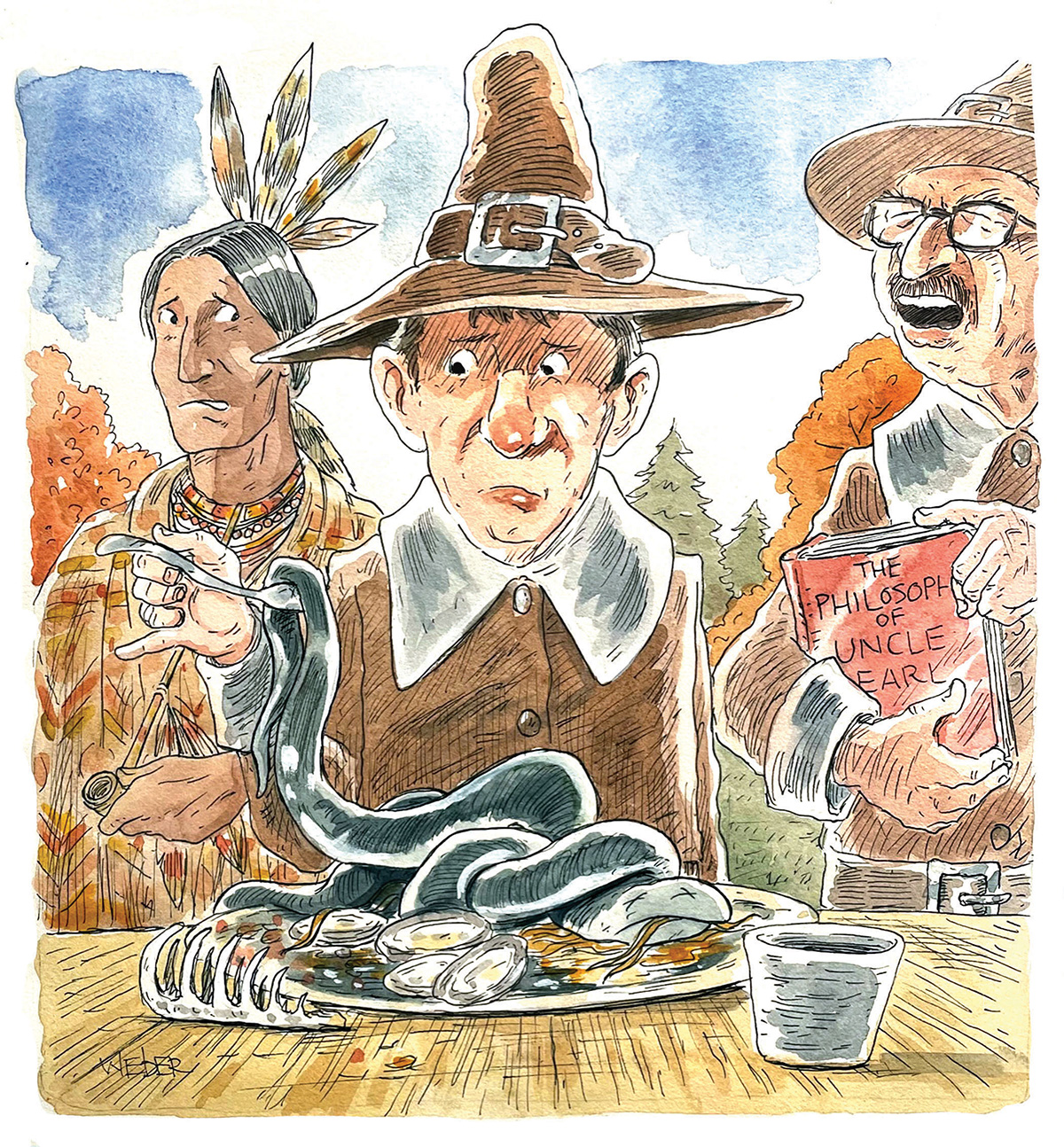 My education about the first Thanksgiving came from pictures I saw in elementary school.

The year was 1621; the place Plymouth, Massachusetts. Gleeful, bonneted women served oven-roasted turkey, while the men stood around looking like the Bee Gees in a Three Musketeers commercial. The Native American men sat solemn and shirtless, even though it was probably 40 degrees. Children scurried about, too close to the boiling kettles, while a dog – a pedigreed Welsh Springer Spaniel, groomed for the occasion – took its place at the center of the scene, as if posing for the Pilgrim Pups calendar. All told, the first Thanksgiving drew about twenty people and one dog.

Turns out, most of that wasn’t quite accurate. Or even close.

I shouldn’t be surprised. After all, when I was 6, a live turkey looked to me like the penciled outline of my fingers. And it wore a hat with a buckle.

Like everything else these days, there’s a dispute, this one about the date and location of the first Thanksgiving. Plymouth, Massachusetts? Maybe. But history also says it could’ve taken place in El Paso, Texas, in 1598. Or as far back as 1565 in St. Augustine, Florida. Some form of Thanksgiving happened in all three places.

As for the Plymouth shindig, more than a hundred people attended – fifty or so colonists (just four of them women), along with about ninety Native Americans from the Wampanoag tribe.

That golden-brown turkey? Maybe not. More likely, they ate venison, and the birds were goose, duck, and passenger pigeons. The menu included seafood, too: lobster, mussels, clams, and eel. Yes, eel, that snake/weasel creature no one would be thankful to find squiggling next to the cranberry sauce.

And there might not have been cranberry sauce at all – for sure, not the excellent jelly kind in the shape of tin cans. The first Thanksgiving didn’t include potatoes, mashed or sweet, because they hadn’t yet shown up from the Caribbean. Bread? Probably not – flour was scarce. Mac and cheese was a hard no; Kraft wouldn’t come along for another 300 years. And while the guests might have had wild turkey, they didn’t have Wild Turkey or likely any other booze. They probably drank water.

All of this tells me that the best part about being a Pilgrim had to be the capotain, that high, narrow hat from the pictures. Wearing that thing would’ve made me look tall and outdoorsy, and when I overate and blew out my belt buckle, a replacement hung right above my brim.

Alas, even the buckle hat wasn’t a real thing. That came along a couple of hundred years later, added by the Victorians, who loved to accessorize. In truth, Pilgrims were probably too poor to own a buckle for their pants, let alone a spare for their hats.

While our modern Thanksgiving has us hanging out for an afternoon and plowing through 40,000 calories before driving off to find antacids, that first Thanksgiving lasted three days. Imagine being cooped up with Uncle Earl for 72 hours, listening to his ideas for overhauling the tax system, while having no football on TV, no TV at all, and nothing to look forward to but a glass of water and a casserole of leftover eel.

At the very least, let’s be thankful we don’t have to deal with that.