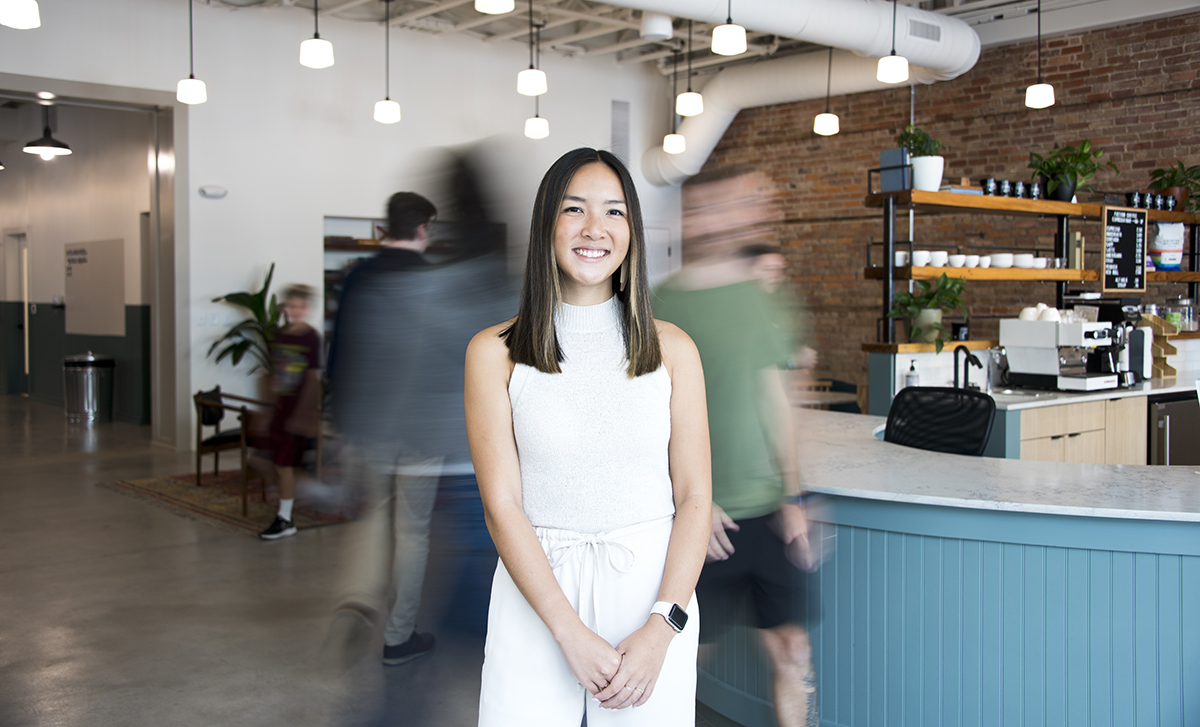 JESSICA PHAM is very tech-savvy, but she doesn’t spend her days coding information, designing apps, or developing websites. Instead, she recruits people who want to learn those skills and helps prepare them for a workforce-hungry industry.

Pham is chief of staff, head recruiter, and Wilmington representative for Charlotte-based Tech Talent South, a woman-owned company that identifies, trains, and places individuals in an array of technology fields.

“We train in programming skills,” she says. “We are a preferred (staffing) vendor for a range of companies. And, while we try and place our candidates first, we do help other (tech professionals) as well.”

Tech Talent South has also undertaken workforce development. During the pandemic, for example, the firm partnered with several municipalities that had a mandate to train interested residents who had been displaced from their jobs by COVID-19. Thanks to this local government support, those individuals learned programming skills at no cost to themselves and were then connected with potential employers.

“Anyone can learn how to code, but it takes tenacity and willingness,” Pham says, emphasizing her firm’s practice of looking for future tech stars who have liberal arts backgrounds or, sometimes, no post-secondary education at all.

“The (program enrollees) were people seeking government aid, people who didn’t have a college degree – it ran the gamut,” she adds. “We saw some really cool things come out of this. In Newport News, we had a candidate who had been in the U.S. only a few years. He was bilingual. He went through our training program and got hired by Texas Solar Professional. You might think that our students are computer science grads who live in dark basements. But no, we’ve trained truck drivers who have gone on to become product engineers. We’ve trained baristas; we’ve trained veterans.

“Liberal arts grads often tend to have soft, interpersonal skills that might be lacking in the typical tech grad,” Pham says, explaining that employers are often looking for a new hire who has a combination of technical skills and soft skills, including languages.

That immigrant who is doing well these days at Texas Solar Professional? His facility in two languages made it easier for him to learn computer languages, Pha says.

Tech Talent South’s ten-to-twenty-week boot camps cover a broad spectrum of skills. Its “full stack” program – which helps the student work with both the front end and the back end of tech products – is the most important kind of training, according to Pham. Meeting with a live instructor online, students learn through projects and exercises, track their progress and earn a certificate of completion at the end of a course.

Each month, Tech Talent South serves about 120 people all across the nation.

Pham’s background exemplifies the kind of education or experience she looks for in recruits.

A native of Hickory, she majored in marketing and communications studies at University of North Carolina Wilmington and aimed for a career in events planning. After a stint at the Brooklyn Arts Center in downtown Wilmington, she took a position with a co-working startup, doing its social media marketing and membership development.

Recruited by Tech Talent South in 2017, she briefly ran its boot camps and developed its Wilmington market by enlisting area companies as clients. She then helped market the Cargo District, building the brand and attracting tenants to the burgeoning neighborhood. And, she earned her license and sold real estate.

“Real estate was a great experience, but I felt my calling was in the tech industry because of how connected, how open it is,” she says.

That realization brought her back to Tech Talent South.

“At the end of 2019, I was brought on as chief of staff, working closely with CEO BETSY HAUSER, helping with strategic initiatives, working on supplier diversity, with corporate partners – the corporate part of our business,” Pham says. “Over the last one-and-a-half years, my role has expanded to director of ‘people growth.’ I’m the admissions front, getting students to take our training programs and working with our program managers to make sure (students) are graduating and are prepared to enter the workforce, getting them connected to new opportunities.”

An important element in people growth is ensuring that opportunities through Tech Talent South are open to everyone, regardless of their ability to pay, Pham says. For the most part, the company’s courses are less expensive than those of some competitors, but they still cost several thousand dollars.

“How do you build a program for all people if you don’t include all people?” Pham asks, explaining that, because Tech Talent South both trains and places tech workers, company fees make it possible for the firm to offer scholarships for students with promise but no money to pay for the programs.

“We try to focus primarily on diverse candidates; that’s very important to us,” she says. “We’re open to everyone.”