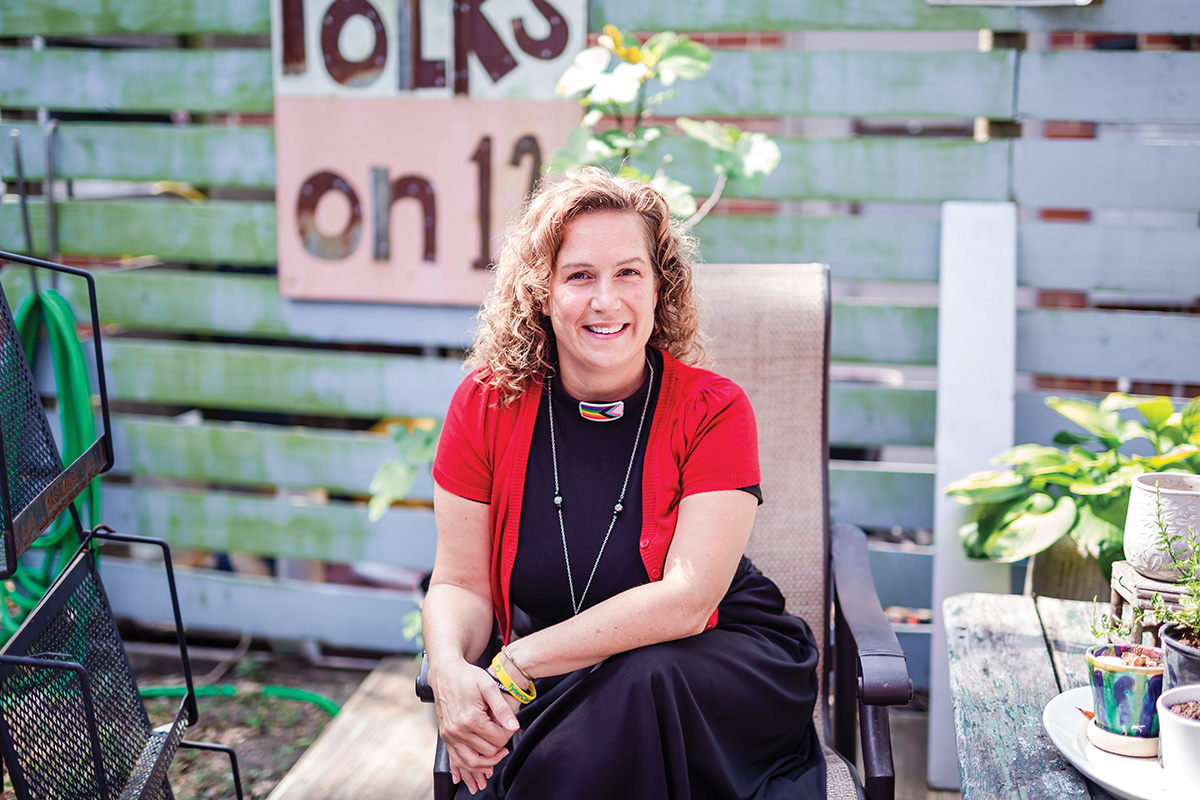 KELLEY FINCH is the lead pastor at Mosaic New Faith Community, a group working to build an “affirming and inclusive” church in Wilmington.

Formed under the auspices of the United Methodist Church, the congregation-to-be seeks to reach out to groups other churches don’t reach, including racial and ethnic minorities, the LGBTQ community, and the physically and mentally disabled.

The name, Finch says, was chosen by a vote of the community’s social media followers. “We see it as a chosen family of people with different talents and gifts coming together to make something beautiful,” she adds.

The new community is the latest turn in the road for the native of Emerald Isle, who says she’s dreamed of being a minister since she was a little girl.

Her father, who ran a bookstore, founded his own church, and little Finch grew up around the pulpit. In college, she focused on world religions, studying at the University of Barcelona in Spain and spending time as an exchange student with a Muslim family in Morocco.

Originally, Finch ministered in a Baptist church until the congregation, turning to a literalist interpretation of the Bible, purged women clergy. Then she gravitated to the Methodists.

For years, Finch was director of children’s and youth programs at Grace United Methodist Church in Wilmington, leading vacation Bible schools and mission trips. When Hurricane Florence hit, she coordinated the church’s relief effort, stocking piles of canned goods, diapers, and other necessities in the hallways and then distributing them to neighbors in need. She also counseled women dealing with the stresses of storm recovery and then the pandemic.

Today, Finch takes her work quietly to local coffeehouses and cafes. Her 17-year-old son Zach, whom he homeschooled, recently left for college, “so now I’m an empty nester,” she says.

How did Mosaic get started? “It all began in the summer of 2021. We’re basically what is known as a ‘pioneer plant.’ Right now, we’re meeting twice a month at Hope Recovery church (the former Devon Park United Methodist Church at 3404 Winston Boulevard). About 5,000 people join in by social media, and maybe thirty-five people show up in person. We had a hundred families come to our Pride Picnic in July. We’re calling our process ‘Mary’s Path.’ It took Mary nine months to have Jesus, and we think it will take us nine months to get launched. Right now, our plans call for regular worship services to begin in January.”

Where will the church be? “We’re partnering with community groups on the Northside. Our commitment is to social justice, so our plans call for a building that we can use on Sunday and which can be used as a multipurpose community center the rest of the week. We’d like to include a community laundry since that’s been identified as a need. Right now, we’re scouting possible locations.”

How do you make an inclusive church? “We have a motto: Nothing for us, without us. Instead of going in and telling people what we’re going to do for them, we try to ask what people want or need, and then help them reach their goals. We have three keywords: Sanctuary, Community, and Empowerment. We aim to provide a safe place where people can discover God, where they can reach out to others and grow into what they can become. Right now, we’re looking into things like a housing ministry and a prison ministry. We have a really good volunteer, a professional who’s just moved to Wilmington, who’s taking charge of our youth program. That’s already meeting twice a month, and we’ve already reached out to B’nai Israel synagogue and the Temple of Israel.”

How did you find your way into the ministry? “I’ve always been interested in religion, and even when I was very young, I think I saw myself in a pulpit someday. My dad was a Baptist minister who founded his own church, so I was always involved in the church with him. In college, I was really interested in world religions. I traveled around, and I saw that people around the world worshiped God in their own way, and it was OK. I took three years off, following the Grateful Dead in a van, but then I had a moment of conscience. I started in the Baptist Church because my family were Baptists, but then the men in my congregation decided that women shouldn’t speak up in church, so I migrated over to the Methodists.” How do you reach out to people? “I just go into restaurants or Folks Cafe or places like that, and people come up to me. I think I’m known as ‘the Bible Lady.’ Particularly if I’m wearing my collar, they’ll ask me questions about what the Bible really says or about faith or morals. People are seeking; we need to reach to them.”