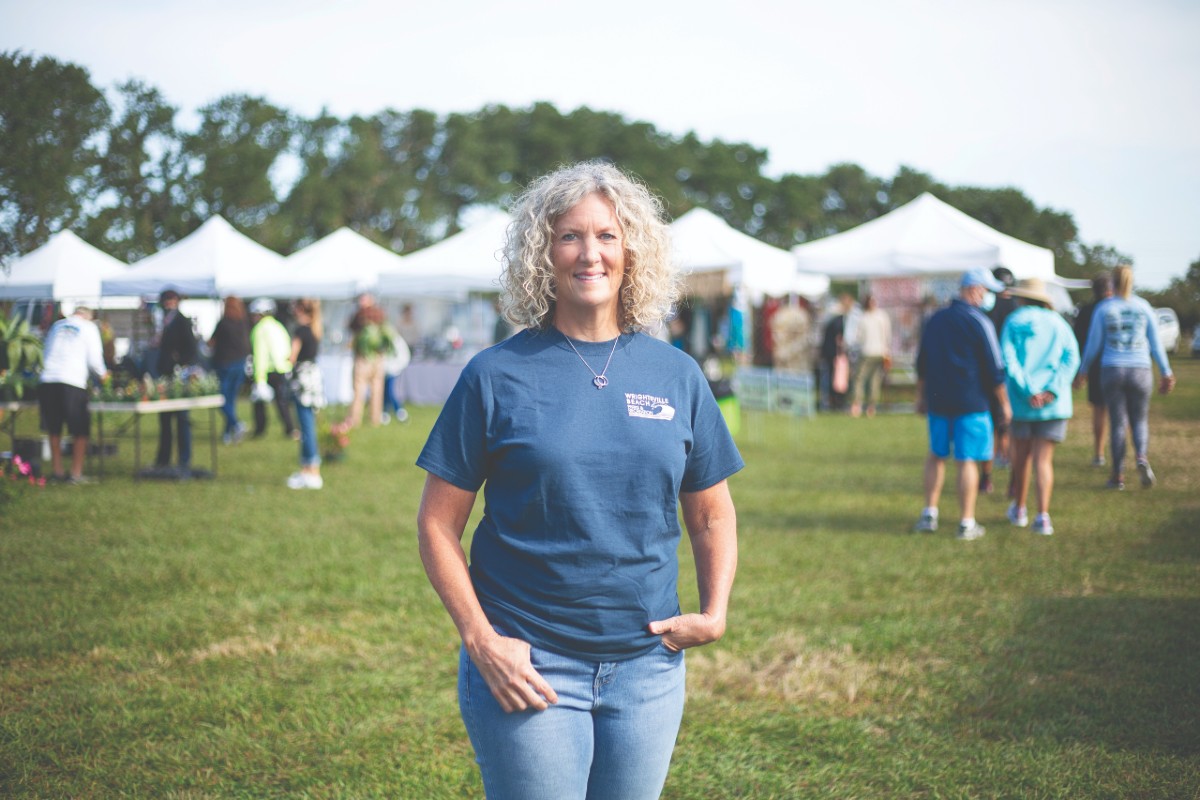 KATIE RYAN has it made. She gets to start her day driving over the Wrightsville Beach bridge, going to work to keep people happy and healthy, and getting to see her family regularly.

Originally from Atlanta, Georgia, Ryan moved to Los Angeles at nineteen years old, planning to stay there only “temporarily,” but ended up getting married and starting her family there. But, Wilmington called her back east.

“I had family here. My parents had moved here, and at the time, my husband could work from anywhere, so we packed up and moved out here,” Ryan says.

With her youngest of her three children in sixth grade at the time, Ryan kept her hands in fundraising working on special events like golf tournaments while kids were in school. Then, the Wrightsville Beach Parks and Recreation opportunity arose.

“The funny thing is, when I was growing up in Atlanta, I had friends in my senior year, sending me postcards from Wrightsville Beach, and now I have been here eighteen years in August,” Ryan explains.

Now, Ryan is a grandmother who is constantly on the go in charge of a wide array of programs and activities that keep Wrightsville Beach a flurry of fun.

A fitness instructor and a circus wrangler, Ryan was managing Santa’s arrival when we spoke; she is an expert at organizing large events and making sure everyone has a good time.

“It is just a fun place. Everybody wants to be here,” Ryan says.

Events like the Wrightsville Beach Valentine Run and Sounds of Summer Concerts in the Park that Ryan supervises keep everybody coming over the bridge. Ryan also is the special events coordinator for major annual events such as the Turkey Trot, the Bark in the Park, YMCA Triathlon, the Ironman Triathlon, as well as other marathons and surf contests.

Another event is the farmers market that first opened in 2009 with just fifteen vendors – craft vendors were added during the 2013 season.

Because of COVID-19, they weren’t sure whether they would have a market this year and didn’t hire an on-site coordinator. But, they did open after a delay, and Ryan took on the role of coordinating on market days, which are Mondays 8 a.m.-1 p.m. at the Wrightsville Beach Municipal Grounds.

“We currently have thirty-five vendors with whom I’ve been able to get better acquainted and observe their interactions with customers and each other,” she says. “They are like a family expressing concern for each other, kindness, and generosity.”

Ryan attributes her success to the help she gets from “an awesome Parks and Recreation staff.”

“What I enjoy most is the fact that the town is able to offer a wide variety of programs and activities, and I get the opportunity to meet so many friendly, talented people,” Ryan says.

Why did you want extend to the farmers market this year to December 14?

“Because the market was so well attended, and with the many festivals that were canceled this year due to the COVID-19 pandemic, I began asking the vendors if they would be interested in participating if I was able to get approval to extend the market. The response was overwhelmingly positive. The Board of Aldermen approved the proposal to extend the market and add five more craft vendor spaces, which filled quickly. Unfortunately, we don’t have all the local summer seasonal fruits and vegetables, but there will be plenty of fall greens and we have a vendor selling oysters.”

Has it been mostly locals or visitors to this year’s market throughout the season?

“I believe the customers are mostly locals as I have seen many of the same faces week after week.”

“Collards, kale, and other greens, squashes. And, we have apples available as well.”

Is there a dish you recommend that uses farmers market staples?

“I’ve enjoyed bread from the market dipped in a fabulous marinara from a former vendor who started at the market and is now bottling his sauce. I’ve also enjoyed a meal of fresh grouper, with goat cheese, blueberry salsa, and roasted yellow squash and zucchini – all from the farmers market … And, I really enjoy all the hand-crafted items … I will be taking care of some Christmas shopping in the coming weeks.”

“I would have to say my favorite spot on Wrightsville Beach is sitting on a beach chair with my toes in the sand!”