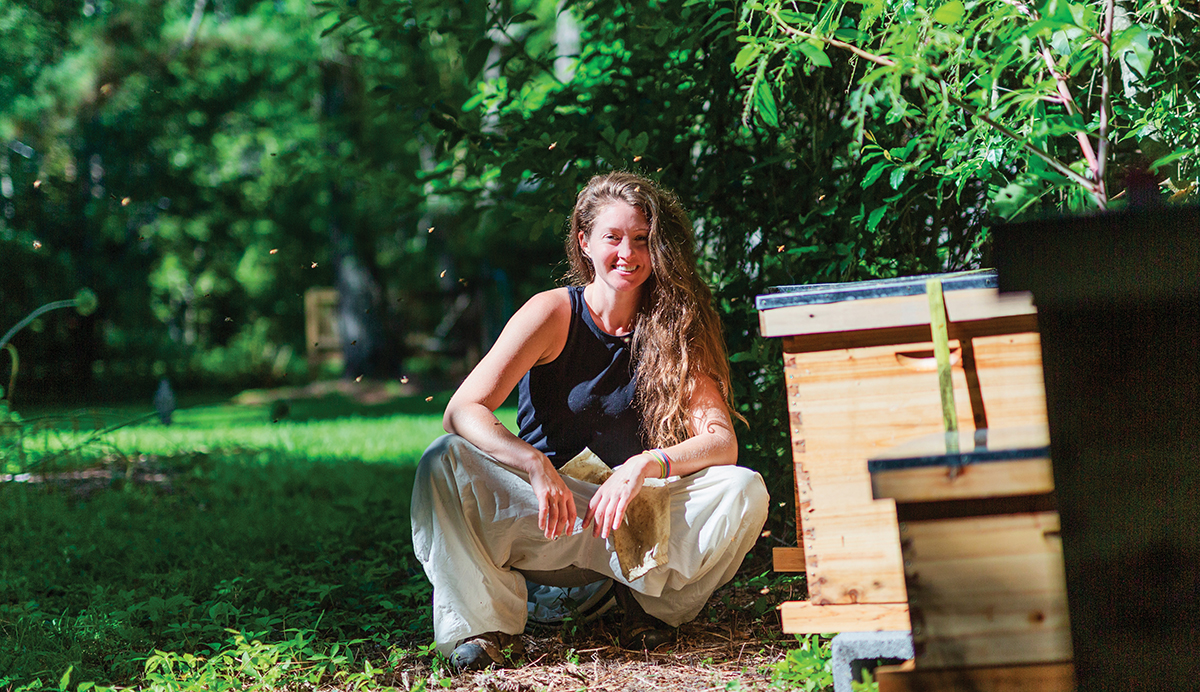 Back yard honeybee hives have become so popular there are numerous organizations and classes in our area to help nascent beekeepers. Taking it one step further, Maryland native JESSY O’KEEFE is offering her expertise at hive setup and maintenance through Seaside Honeybees.

Shortly after moving to the Boston area, O’Keefe saw a job posting from a beekeeping business.

“I was looking for a physical and mental challenge,” she says. Despite having no experience with honeybees, she did have an interest, and she got the job. As the company grew, so did her knowledge and responsibilities.

When she decided to move to the Port City, O’Keefe was delighted to find many beekeepers, but no one in the hive management and mentoring business.

Seaside Honeybees offers a turnkey setup on the client’s property which O’Keefe says can be a simple back porch or deck. In fact, she says bees appear to thrive in cities as well as in the countryside. For $600, her company sets up the hives. Setup includes gear, feed, treatment, replacement queens, extra boxing, harvesting equipment, and more.

The starter package, weighing in at three to five pounds, contains 10,000 bees. Monthly management for $100 includes checking on the hives every two to five weeks depending on the time of the year.

“Beekeeping is not a cheap hobby,” O’Keefe says. “There is a lot of up-front costs. With my service, you don’t need to think about any of that; it’s all-inclusive.”

The full service includes a detailed report to the client, so they learn about the bees and stay connected to the bees through the report without having to go to the hive, she added. The harvested honey belongs to the client.

She also offers a mentoring service to individuals who want to do the work themselves, but need instruction, assistance, and advice.

“I’m trying to make beekeeping accessible for people who feel they want to do it, but feel it’s overwhelming, which it is,” she says.

Aa a member of the New Hanover Beekeepers Association, she said belonging to such an organization facilitates the sharing of information. “There’s much to learn.”

Of the thousands of pollinators in the world, honeybees get a lot of attention because they pollinate more than 100 important crops, O’Keefe pointed out.

“What’s obviously great about honeybees it that we can be so connected to them because we can farm them,” she says. “They make honey we can harvest and eat, which is awesome. People are drawn to bees.”

This connection also means that honeybees are an indicator species. If they’re doing well, the planet as a whole is well. If they’re declining, so is the planet, and the reasons for the decline affect all pollinators, she notes. Among those reasons are habitat loss and the chemicals used in our agricultural system.

O’Keefe hopes local residents will get excited about beekeeping. “Most people assume you have to have acres and tons of flowering plants. That’s not the case. You only need space for the hive and can get next to it to check on them.”

The bees will travel a three-mile perimeter to find food, she says. “They have a very accurate GPS system that calculates based on the position of the sun.” This means Wilmington area bees will have a very diverse selection of foods from which to choose. “They seem to do well here.”

Describe the role honeybees play in the environment.

“Honeybees pollinate more than one hundred important crops in the U.S. What’s obviously great about honeybees is that we can be so connected with them because we can farm them. We can transport them. They make honey that we can harvest and eat, which is awesome, so people are drawn to honeybees. It’s important we stay in tune with the honeybees because how they are doing is an indicator of how other pollinators are doing as well.”

Are you concerned about diminishing numbers of honeybees?

“There are multiple causes: pesticides, a lack of habitat. Fundamentally, the issue is with our agricultural system of huge monocrop farms. The soil is depleted of nutrients, so they must be sprayed. We’re putting a Band-Aid on it. One bee in its lifespan chooses where it goes and has its preferred type of flower. Each is different. What you get in the hive is a mix of all different nectars. The nutrition they consume is nutritionally complex. If you put the bees in the middle of a huge monocrop, which is a food desert for them, they’re going to be devoid of the nutrition they would normally be getting.”

“I had thoughts of becoming a beekeeper before moving to New England. I saw a posting that a company was hiring and thought it sounded like what I was looking for. That company grew from the time I started, and so I learned as I went.” HOW CAN SOMEONE BECOME A BEEKEEPER? “I’m trying to make it accessible for people who feel they want to do it but feel it’s overwhelming – which it is. There are classes and clubs. Clubs are good for sharing information.”

What conditions are necessary for a successful, happy hive?

“Physical space for the hive and for standing next to it to care for it. Bees fly around 3 miles to get what they need to eat, so you can put a hive on your deck or porch. We’ve seen them do really well in cities. They seem to do well here.”