From Wilmington to Moldova 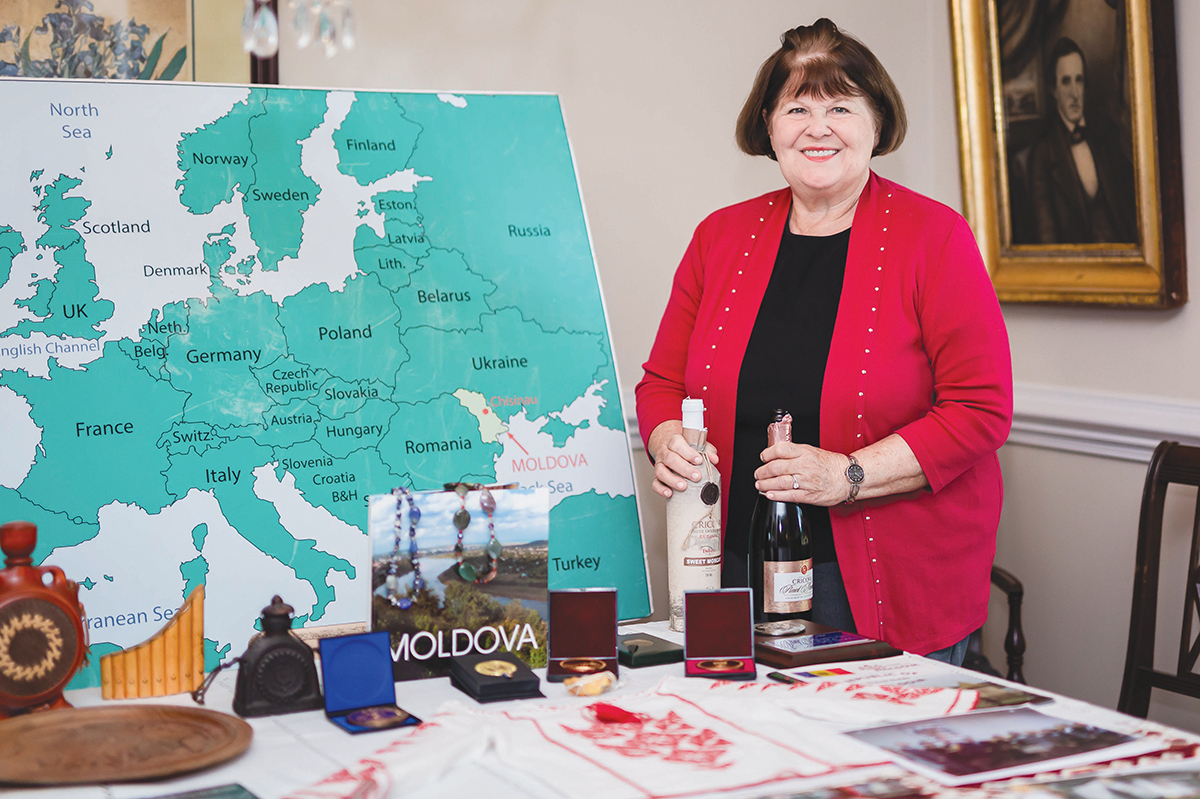 Medical librarian DONNA FLAKE has visited the country of Moldova eight times but has been involved in aiding the health of its residents for years. As the librarian at the South East AHEC Robert M. Fales Health Sciences Library at New Hanover Regional Medical Center for twenty-eight years, Flake established the first consumer health library in North Carolina in Wilmington in 1999.

Now retired, she’s using her background and experience to advocate for access to updated health resources for Moldova, one of the poorest Eastern European countries. With the help of proceeds from the Moldovan Wine and Food Tasting on Jan. 18, sponsored by Wilmington East Rotary Club, Flake hopes to raise enough funds to support a global grant, which would establish health education libraries abroad.

“There is love and friendship between Moldova and North Carolina and a long history of support from the state government,” Flake says.

North Carolina and Moldova established a bilateral partnership in 1999 as part of the NATO Partnership for Peace, and it is formally renewed every five years. N.C. Secretary of State ELAINE MARSHALL has led the charge with substantial interactions in the academic, cultural, business, religious, and military circles but not without help.

A librarian for forty-two years, Flake was asked in 2006 by the Minister of Health from Moldova to assist the country’s only medical library, which at the time was at University of Moldova. North Carolina university libraries, along with local and regional libraries, support the partnership and have sent 350,000 current medical books and journals to Moldova, along with medical supplies and equipment.

“This greatly increased their knowledge and ability to practice 21st century medicine with resources they never had before,” says Flake.

Moldovan librarians were equipped with electronic databases and literature and have been welcomed to North Carolina multiple times for training.

“We brought their librarians to America and gave training for the best methods of library science and marketing to encourage people to use these resources,” Flake says. “The librarians we work with don’t make a lot of money. We try hard to help them all we can.”

To grow this vision of partnership, Flake is currently pursuing a $63,000 grant with Rotary International for even more assistance and to expand the partnership to additional libraries. The Global Rotary Grant would establish health education rooms inside seven Moldovan colleges and universities, so citizens can visit and learn healthy lifestyle choices and disease avoidance. Each library will be granted books in Romanian and Russian, a computer, a printer and scanner, furniture, a blood pressure monitor, and the experts to provide health education lectures and webinars.

The idea is to help educate Moldovans about the leading causes of death in their country – heart disease, diabetes, stroke, and now COVID.

“We’d like to continue to increase that number of libraries we work with and also elevate the economy of Moldova,” said Flake.

Moldova is one of Eastern Europe’s poorest countries, but its citizens have a literacy rate of 98%, according to Flake, who believes with the proper resources, the country could thrive.

“These people are remarkable,” she said. “They are intelligent, resourceful, kind, generous, and some of the most loving and thoughtful people I have ever met. I want people to know how hard they work, how much they strive to make a living, and they need a hand up.”

Flake was first inspired to help Eastern European countries as a teenager. Her best friend’s father had fled his Eastern European home in 1944 when communism took over and ever since, she’s wanted to help people, like him, who suffered from poor conditions.

In 2016, Flake received the Medical Library Association’s Lois Ann Colaianni Award for Excellence and Achievement in Hospital Librarianship and selected as a fellow, one of the association’s highest honors. Also known as the Librarian of the Year award, this prestigious honor is given for contributions to excellence and achievement in the health information profession.

Flake said $20,000 has already been raised toward the grant but the Moldova Wine and Food Tasting is the big endeavor to raise the remaining funds. Tickets are $50 and entrants can experience unique Moldovan wines, food, music and more.

“People can be sure if they donate, it will come to fruition and be done well,” Flake says.

WHAT HAS BEEN YOUR EXPERIENCE WORKING WITH THE REPUBLIC OF MOLDOVA?

“I was asked by the Minister of Health from Moldova to help the only medical library in Moldova, which is at the University of Moldova. … This is the poorest country in Europe, but they strive to do their very best. The literacy rate of the country is 98%, so the people are intelligent. Most of the people speak one of these two languages: Romanian or Russian.”

WHAT KIND OF IMPACT HAS NORTH CAROLINA, WILMINGTON SPECIFICALLY, HAD ON THE HEALTH OF MOLDOVA CITIZENS?

“When I first went to Moldova in 2006, they probably had about 200 English language medical books that were out of date, and they had thousands of Russian medical books, at least 25 years out of date. They did not have current authoritative medical information at the one medical university in the country. North Carolina libraries, including the New Hanover Medical Library, sent more than 350,000 current medical books and journals. This greatly increased the knowledge and ability for them to practice 21st-century medicine with resources they never had before.”

WHAT ARE YOUR HOPES FOR THE FUTURE OF THIS PARTNERSHIP BETWEEN NORTH CAROLINA AND MOLDOVA, AND HOW DO YOU INTEND TO CARRY THAT OUT?

“Currently our partnership involves many libraries in North Carolina partnering with Moldovan libraries, and I’d like to increase that number, so things like webinars can be given to increase knowledge. Now they’re all going through COVID, and it’s been hard on these libraries to have the time and staff to attend the webinars we’d like to present. One hope is for things to get back to normal so we can have more coordination and teaching involving more libraries.”

WHAT IS SOMETHING YOU WISH OTHERS KNEW ABOUT THE EASTERN EUROPEAN COUNTRY?

“The people. They are resourceful, kind, generous, and are some of the most loving and thoughtful people I have ever met. I want people to know how hard they work, how much they strive to make a living, and they need a hand up. The librarians I’ve worked with don’t make a lot of money. We try hard to help them all we can and not only work with the libraries but elevate the economy of the country of Moldova.”

WHAT IS YOUR FAVORITE MOLDOVAN DISH?

“Placinte (a round, flat bread commonly stuffed with cheese). It’s a wonderful dish, and it can be filled with many different things. I like it with cherries and with apples.”