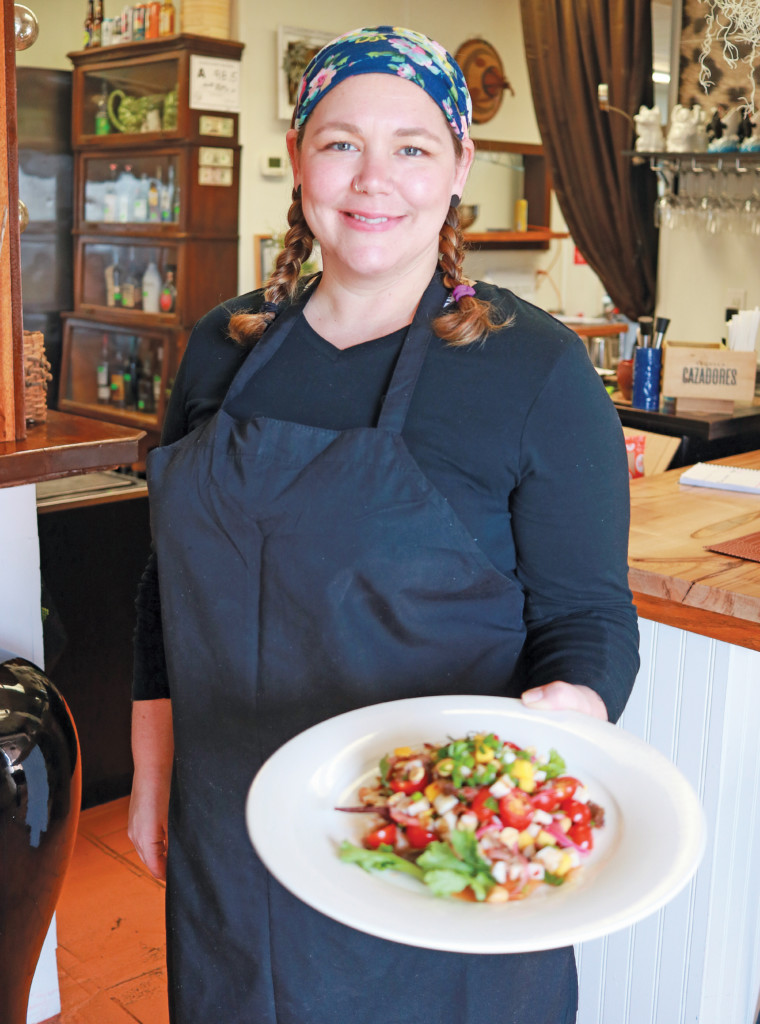 SALT FISH opened October 17, which means the Carolina Beach restaurant has yet to experience its first summer season.

But, while the eatery is relatively new, this is no first-time venture for its owner.

“Things are going well, better than I expected for winter on the beach,” says award-winning chef KIRSTEN MITCHELL (left), who has logged countless hours on the local dining scene before deciding to open her own spot last year.

The restaurant has evolved since its launch in October, although Mitchell doesn’t shy away from change.

“A lot of ideas we originally had didn’t work out as well as we anticipated,” she says. “Now that we are in our fourth month, we are still evolving and constantly changing things.”

One major change is the outside of the restaurant, which is located at 718 North Lake Park Boulevard. The exterior got a bright yellow paint job this winter to match the restaurant’s sunny vibe and beachy interior. Co-owner DONNA MITCHELL , Kirsten’s mother and a local artist, has slowly been working on an outside mural.

Bright purple flowers shower the building along with a smiling blue cat. A painted blue pelican stands nearby – a style Kirsten has donned “tacky beach tiki.” Overall though, the restaurant has stayed consistent since its beginnings.

“We haven’t made anything too drastic,” Kirsten says.

The location is small – thirty-six seats with eight of them at the tiki bar.

“It’s a very small restaurant and dining room, but I that’s how I wanted it to be,” Kirsten says. “Its small size gives it its own charm.”

The mother-daughter team has a long history of working in the restaurant business, the family having owned a small bistro in Banner Elk when Kirsten was growing up. Living in South Florida and the Bahamas inspired the duo to create tropical dishes. Kirsten’s culinary training over the years also inspired her creations.

“With my wide variety of cooking knowledge, going from classic French to Asian and Caribbean, I decided to marry all of these together to form some bizarre island cuisine,” says Kirsten Mitchell.

With spring here, Kirsten has menu option changes in mind to better suit the seasonal change.

“We are currently gearing up for the summer season and plan to bring more of a summer focus to our restaurant and menu such as lighter menu options, although we will still keep our best-selling options available,” she says.

She also plans to incorporate a more summer-focused drink selection, as well.

Most recently, the restaurant has featured its own version of the Blue Lagoon cocktail with Bombay Sapphire gin, lemon, soursop, ginger simple syrup, and Blue Curaçao.

Kirsten plans to change the menu in March. She’ll then shift it again once the summer season is in full effect – depending on the crowds.

“Caribbean food can get heavy and saucy, but it can also be warm or very light,” Kirsten says. “The many different ingredients involved means there are so many different ways you can take it.” 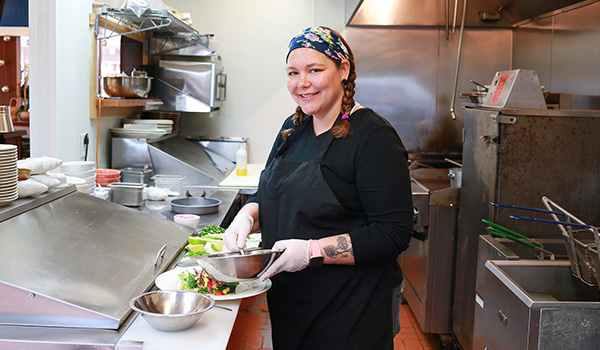 In the months ahead, she plans to incorporate more local seafood, although they already use a lot now, including mullet.

A smoker left behind from the former restaurant at the space inspired her to incorporate smoked dishes onto the menu.

“I have been able to do a lot of smoked meats, which has been fun and out of my comfort zone to learn,” she says.

For those who have a hard time deciding, the Salt Fish sample tower is a delectable way to try a little bit of everything. For those who are pescatarians (those who follow a vegetarian diet but eat fish), the chef accommodates dishes by leaving out the sausage in the fried rice. There is also a vegetable tofu entree option.

Kirsten says she wants both casual and dressier customers to feel welcome.

“I want it to be fun, whimsical, and laid-back, but also provide a fine-dining service,” she says. “It’s still more a casual vibe. You can get dressed up and come here or come in your flip-flops. You’re welcome either way.”