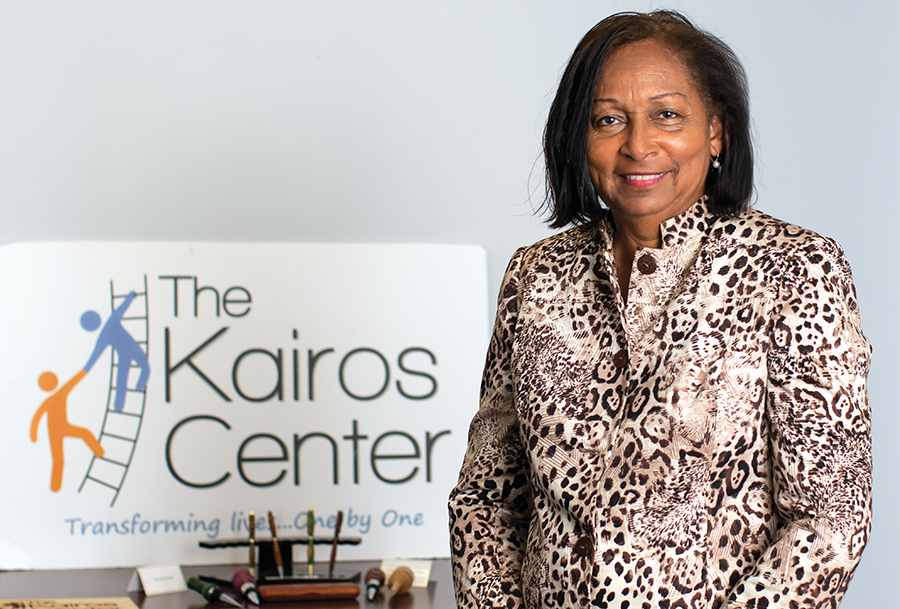 When GLENDA TATE moved back to Wilmington in 2004 after her mother had a stroke, she noticed it over and over again – health care workers helping her mother were struggling to make ends meet.

“You get to know these people, you get to hear about their children and their families,” Tate says. “Sometimes their car would break down, and they wouldn’t have enough money to pay their rent.

“I calculated in my head one night and I thought, ‘They just don’t make enough money.’”

Tate, who grew up in Wilmington and later worked as a senior executive with the U.S. Department of Transportation in Washington, D.C., wanted to address a systemic lack of sufficiency in communities, particularly among African Americans.

She founded The Kairos Center (kairosempowermentcenter.com) philanthropic organization in 2013 to help individuals climb to higher economic levels by discovering their skills, talents, and dreams.

“I believe everybody has this distinct purpose that they were created for,” says Tate, president and CEO. “My goal was to connect them with it and to have them get an aha moment.”

Tate spent twelve years caring for her mother before she died, and Tate considers that time together a gift.

“Now, I get the opportunity to give back to a place where I was born,” Tate says. “I did get that wonderful time with her, and out of it was born Kairos.”

The Kairos Center is among eighteen nonprofit partners at The Jo Ann Carter Harrelson Center, a downtown campus of nonprofits. The Harrelson Center recognized Tate and Kairos as Partner of the Year in 2019.

“A lot of her clients, they do feel like she is family,” says MEADE VAN PELT, The Harrelson Center’s executive director. “She has their best intentions at heart, she treats everyone with dignity and respect. And, no matter where life may have taken them or what obstacles they have faced, she recognizes they can grow.

“There’s a real opportunity here for The Kairos Center while the light is shining on the need to encourage and develop minority entrepreneurship,” Van Pelt adds.

The Kairos Center is Biblically based and named after the Greek word “kairos”, meaning an opportune moment in time. The center offers a free basic course called “Living Your Best Life Now,” which encourages clients to dream about what they want to do and helps them along that path.

“We don’t give people fish; we teach people how to fish,” Tate says.

Clients also may get help furthering their education, finding a good job, or starting a new business.

Kairos has helped entrepreneurs start up a mobile barbecue business, a shuttle transportation service, an auto detailing service, a handcrafted wooden pen store, and other endeavors. “It really is about spending time and encouraging people and not just training them and letting them go,” Tate says.

Tate recalls working with a certified nursing assistant who commuted daily nearly an hour away to earn a degree as a registered nurse and move up in her field.

Another client is a former prison inmate and self-taught jailhouse lawyer who helped fellow inmates and himself get early releases. He then went to school and is on track to graduate this summer with a paralegal degree.

“It’s staying the course and recognizing that that’s a skill that he has,” Tate says.

The Kairos Center, which is privately funded through personal and corporate donations, also helps clients buy cars and find housing by matching some costs with money clients save, and it offers a financial literacy program called “Money Matters.”

“If I get you making more money, but I don’t teach you what to do with that money … use it, manage it, and then help it to grow, then we haven’t succeeded,” Tate says.

Tate works with contractors, administrative support, and volunteers, and the center is seeking help with social media and business coaching. Plans include a program with experienced tradesmen offering vocational education opportunities.

Clients include men and women, but Tate says marketing focuses more on men because there are fewer programs out there for them.

“There’s not a lot of help, to me, for men who need it in the way that it is for women,” Tate says, “What we wanted to do is make sure they were included.”

In a given year, Kairos serves about thirty to fifty long-term clients and even more who take the basic or financial courses, Tate says.

“Our numbers matter, but we measure ourselves by the real successes that we have, and sometimes that might take a year or two,” Tate says.

Economic empowerment is key, she says.

“We’re after a legacy,” Tate says. “We want the adults that we’re helping now, we want to change their lives because we want their children to see that their lives got changed. If we can do that, then ten years from now, whatever it is, I’m going to say Kairos was a big success because we passed something on economically.”