At first glance, HALEY PINDER embodies all the qualities for opening a Chicken Salad Chick restaurant—Southern charm, fondness for chicken salad, and desire for serving healthy, convenient food. But she is more than just a “chick” serving chicken salad.

She is an astute businesswoman, mom of two kids, wife, online college professor, and budding entrepreneur.

Pinder seized an opportunity for owning a company with her husband that aligned with her business aspirations and, most importantly, her family values.

She and her husband decided to relocate from Virginia and open the restaurant in Wilmington.

“We have good friends in Georgia who own four locations. They gave us the inside scoop,” she says. “After analyzing the corporate structure and environment, and realizing its values, it was a match.”

The restaurant, new to the Wilmington area and open since November, serves up almost any chicken salad combination you could imagine. 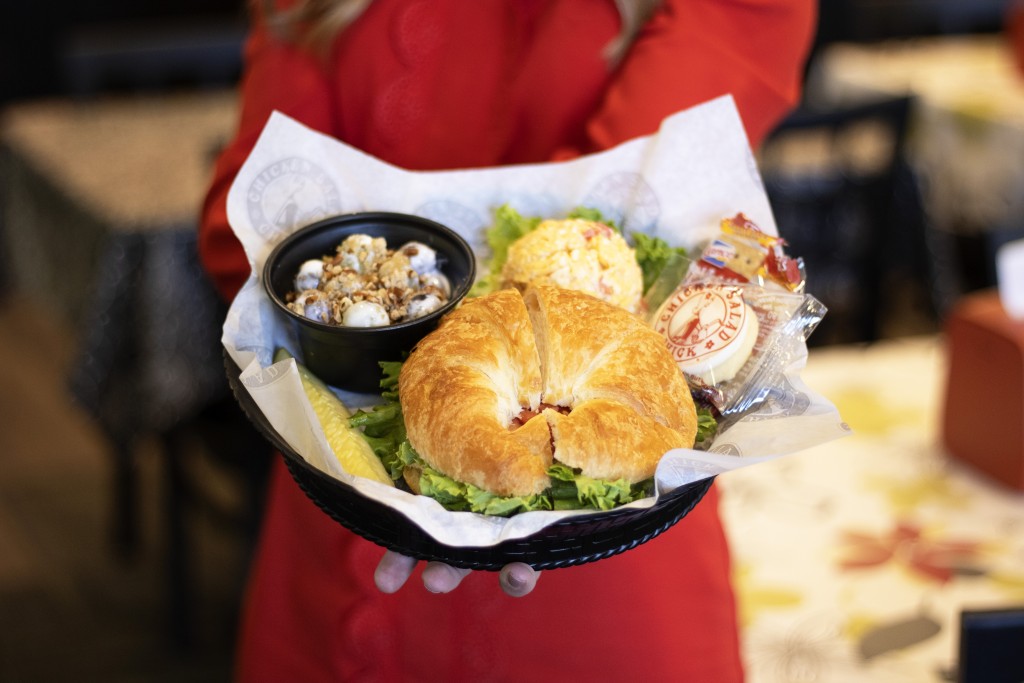 “We offer twelve varieties plus a seasonal option,” says Pinder.

Each option is named after a special person in the founder’s life.

“That was particularly important to me,” Pinder says. “Women’s relationships and bonds are honored and recognized.”

Also, Pinder felt strongly about the fact that it is healthy food and convenient for moms on the go.

“The concept offers a healthy option for people. And we are keto-friendly—high in protein/low carb,” she says. “I would feed it to my family, and it reminds me of simpler times of going to my Aunt Betty Faye’s house and having dinner,” she says. “Or having it at special family occasions such as bridal or baby showers.”

So how does her husband, Shane, fit into the “women’s” world of chicken salad?

“It was nothing new to him,” says Pinder. He used to coach a women’s volleyball team. “To him, it just made sense.”

Shane guided a lot of the renovation of the space, which lasted for almost six months.

“The space had to be gutted and refitted for a kitchen since it was a former mortgage company,” she says.

And she was glad her husband took over those duties because she had to split her time in California. After all, her daughter, Graysen, was competing on the Food Network’s Kids Baking Championship at the time.

Thirteen-year-old Graysen battled through many sweet challenges and was named champion this week making her another Pinder female to keep an eye on.

One of the biggest obstacles in bringing the restaurant to the area was hiring, Pinder says.

It was easy to sell the people on the concept but finding the right employees was of particular concern.

“We are a sassy, family-friendly, southern environment that wants to spread joy,” Pinder says. “So, we look for people who embody that.”

One employee who exudes that charm is Mr. Curtis, Pinder says.

This will be the first summer for the restaurant in Wilmington and Pinder is eager to see how it goes. The owner is hoping to capitalize on the seasonal beach traffic.

With other franchise locations owned by others in Charlotte and plans for some in Raleigh, she looks forward to building on the current Chicken Salad Chick momentum in the region.

And depending on how things go, she and her husband already have their eyes set on a future location in Leland.