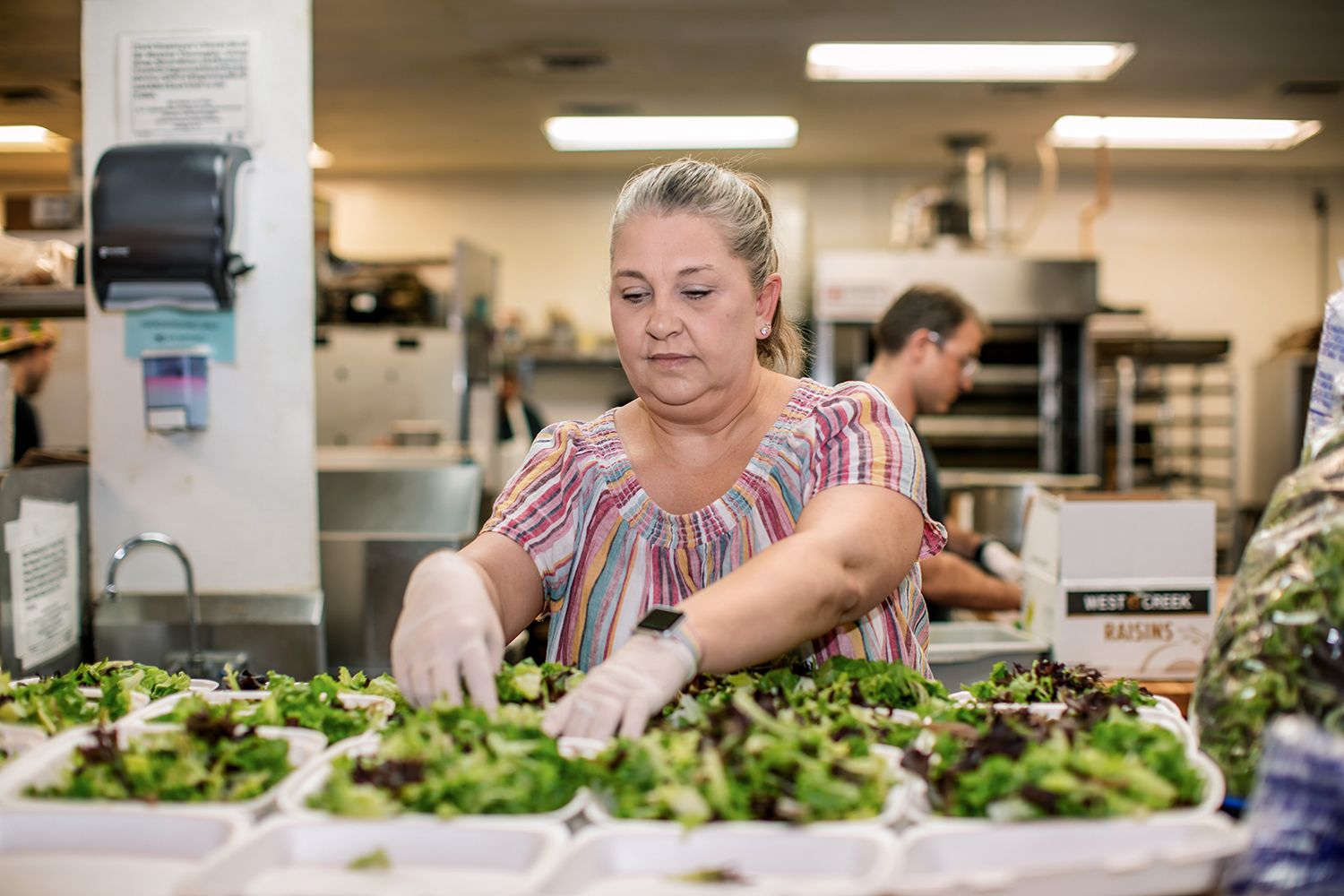 A long with other local restaurants that had to adjust to restrictions because of control measures for the coronavirus, two local eateries – Sweet N Savory Cafe and Love, Lydia Bakery – are coping with the COVID-19 pandemic while putting their staff and customers first.

Sweet N Savory Cafe, located on Pavilion Place, after the state shut­down restaurant dining rooms, ex­panded curbside pickup and start­ed delivery. Love, Lydia Bakery, on South Third Street, temporarily closed in the wake of the order but not without first finding a creative way to help the employees.

LORRAINE BARNES (shown above), chief operating officer of Sweet N Savory Cafe, went right into action when Gov. Roy Cooper issued an executive order to close sit-down service at restaurants followed by a statewide stay-at-home order to try and slow the spread of the virus.

“We chose to lean on our culture of adaptation and be 100% present for our community,” says Barnes, who began creating plans in Febru­ary based on every possible scenar­io. “In our hearts, we knew what was coming and what would be required to attempt to contain the spread of the virus.”

It’s a combination of Barnes’ en­trepreneurial spirit and people who inspired her, even as a teen, that pre­pared her for challenging days like this. Her eighth-grade civics teach­er challenged her to think outside the box, a prior boss coached her to turn stumbling blocks into stepping stones, and ROB SHAPIRO, owner of Sweet N Savory Cafe, challenges her to remain present and not get stuck in a black-and-white world.

While the government order required changes, Barnes says the pivot was easy. Sweet N Savory Cafe had always offered takeout as well as provided curbside service for guests who had that need. The restaurant started offering delivery through Uber Eats and DoorDash; lowered prices for breakfast, lunch, and dinner; and offered family meals.

Barnes says the regular customers have been the cornerstone of the business.

“We are a big family here at Sweet N Savory, and it is difficult not being able to give each other a hug or a big high-five,” she says. The staff of sixty-one became nine after layoffs. Recalling that discussion, Barnes says, “Our staff was more than understanding. They took it better than I did, being the one who officially laid them off. I cried for two days and am still heartbroken.”

Barnes has concerns about the safety and well-being of family and friends. Yet, she sees a future where today’s acts of kindness continue.

“Our greatest strengths are revealed through adversity,” she says.

LYDIA CLOPTON, owner of Love, Lydia Bakery, tried to keep her doors open. She recalls her reaction to the governor’s declaration.

“At first I felt great about it because it was the safest thing to do for everyone,” she says. “We tried to stay open for a few days, but it was obvious people were just not going out. We weren’t able to make enough income, and I couldn’t pay my eight employees enough to make it worthwhile to stay open.”

Closing the restaurant was a very difficult decision for Clopton. “The employees were stressed because it happened so quickly,” she says. “Trying to navigate unemployment benefits for the first time is tough.”

And, while she is glad that her employees were home and safe, she was concerned that getting financial benefits from the government would take time.

It wasn’t long before Clopton and her partner, DEAN NEFF, found a way to help her employees. “We were trying to figure out ways to quickly get cash to pay the staff. So, we created a home chef auction. Cooking is what we know. This seemed like the best option,” she says.

Clopton ran the auction on Facebook, enabling bidding through comments and private messages. The auction raised $1,750. The winners, a couple in Charlotte, will be treated to dinner for six at a later date, prepared in their home by Neff who is a James Beard Foundation Awards semifinalist. The annual awards, which celebrate culinary professionals in the United States, are named for James Beard, a champion of American cuisine and professional chef.

Clopton and Neff are hopeful about the future of the restaurant business.

“I hope people realize how fragile local restaurants are and that we will still need a lot of support after this is over,” Clopton says.

Neff plans to open a new restaurant called Seabird at the end of the summer in downtown Wilmington that will specialize in local seasonal seafood.

Both Clopton and Barnes invite everyone back to their restaurants. Barnes looks forward to serving favorites such as Wrightsville Beach French toast and shrimp and grits.

“While we are distant from family, friends, and loved ones right now, we are not alone,” she says. “We are strong! We are fighters! We will triumph.”

“Local restaurants are going to need sustained support when we reopen,” Clopton points out. “Visit all those places you keep meaning to go to but didn’t quite make it. And then, go again!”