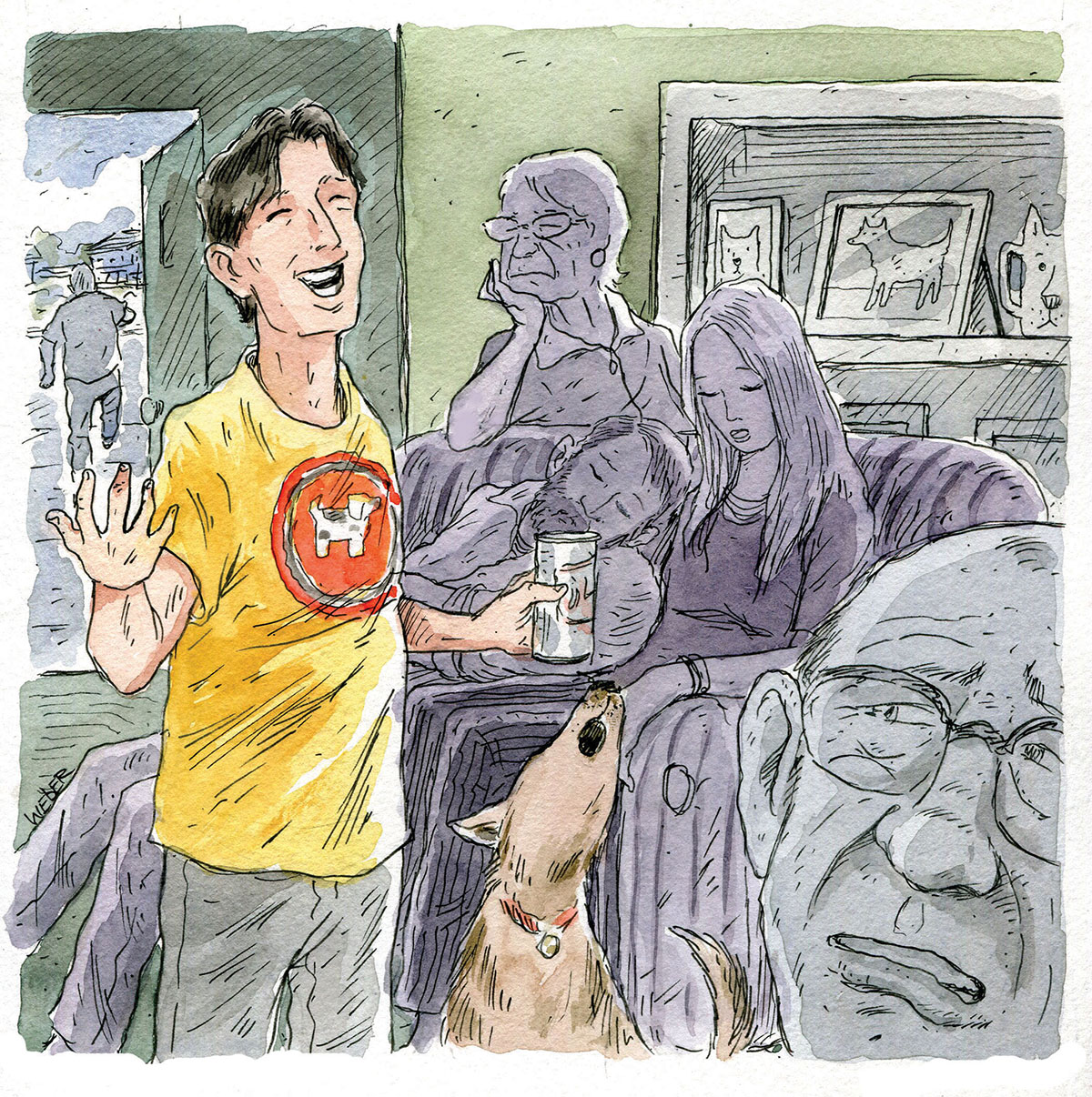 Even in my worst-case, mid-life crisis scenario, I never imagined I’d become “that guy.” But I was struggling emotionally in the wake of a breakup. Middle-aged and suddenly single again. Plus, my writing career was on the skids. Email inbox filled with rejections from prospective agents for my latest manuscript.

So, yes, I was lonely and vulnerable. And she was young and cute and full of energy. Maybe I was destined to fall for her because here I am six months later: that guy who won’t shut up about his rescue dog.

You’ve met versions of me before. Online, you’ve probably unfriended a few. Or found yourself searching for the fire exit at a party after someone like me launches into his rescue dog monologue.

“Name’s Kit. She’s a rescue,” I tell anyone who’ll listen. “Found pregnant and wandering the streets. She was being fostered by a neighbor. She had just weaned seven puppies. They’re already bigger than she is!”

The kids petting Kit (at the Riverwalk or Greenfield Lake or the beach) all “Awwww!” and their parents and I share a smile. They think I’m done with my story, but they’re wrong. I’m far from finished.

“I didn’t adopt her right away,” I continue. “I wasn’t in any headspace for that, just out of a breakup and all, so she was sent to another foster family. But that didn’t work out, and after a week, she came back. By then, I was ready. It was fate.”

By this point in my story, the kids are yawning, and the parents’ smiles transform into the glassy-eyed stare of hostages wondering when their forced captivity will end.

“And I’ve just been so glad I adopted her,” I continue the tale a day later to a friend currently in the midst of a contentious divorce. “I can’t imagine the last few months without her.”

“She’s pretty cute,” another friend nods a few days later, checking her phone to see if a doctor’s appointment has opened for her immunocompromised child.

“Diane, the dog trainer, says Kit is super smart. And Diane’s a tough cookie. She has to be an alpha because she’s really training you, so you can train the dog.”

At this point, the look on my audience’s face is familiar from those illustrations of what a drowning person looks like: an expression of vacuous and inescapable doom.

“She’s doing great with her sits/stays,” I later tell the nice folks next to me at the dog-friendly bar, “but I just can’t get her to do her down/stays, you know? And she’s real skittish on hardwood floors. Do you guys need another beer?” I ask.

“No, we’re taking off,” the group of strangers says in unison as they push for the exit.

Before they’ve even reached the door, I’ve lined up my next victim. The older couple in the corner smiling at my Kit. They will hear my story. I’m like the Ancient Mariner now.

I have a rescue dog tale I must tell.