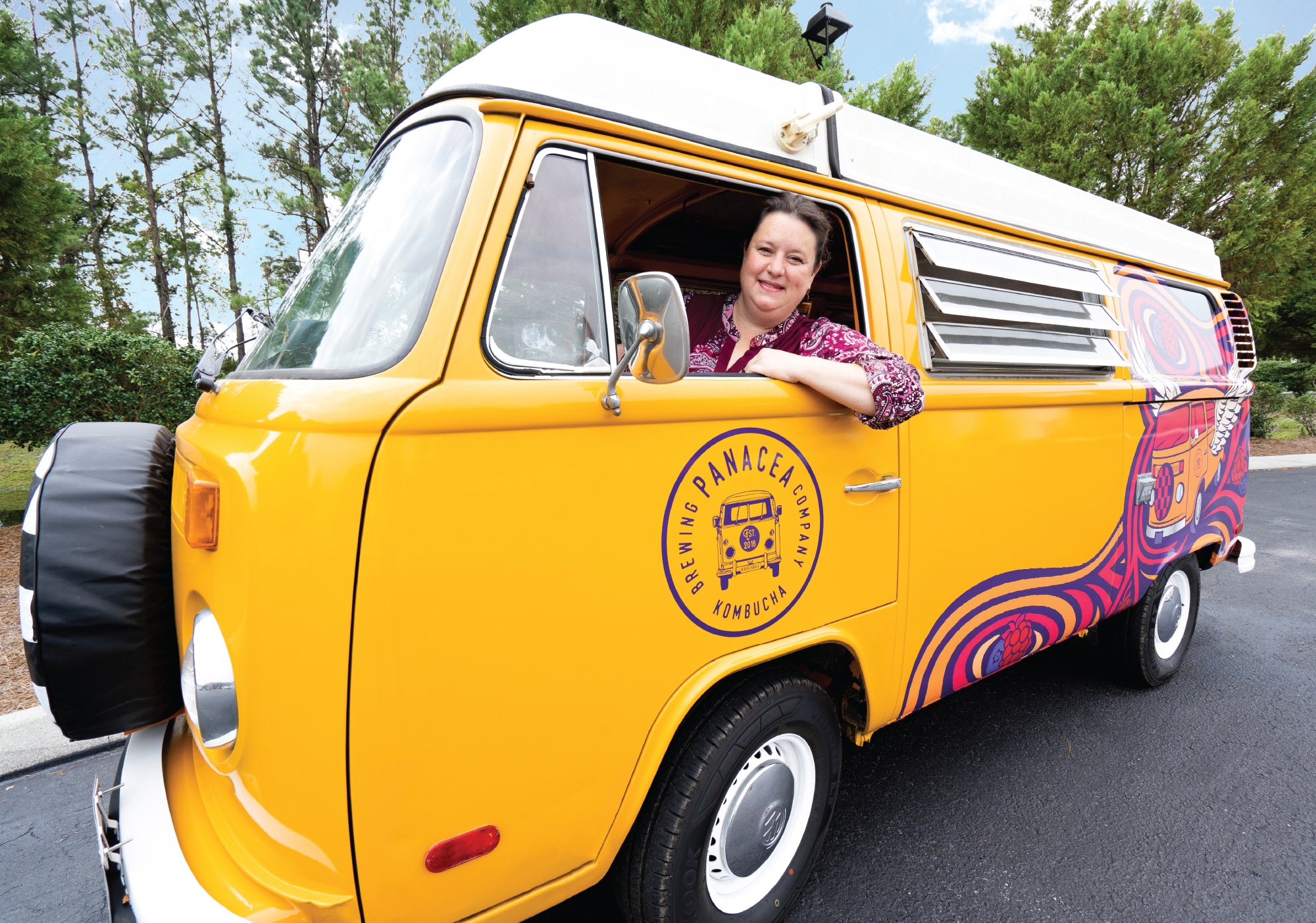 Starting one business is tough. But how about two?

Since Panacea Brewing Company’s initial opening in 2016, it continues to make a splash in the area. So, in addition to putting down some new roots soon in Burgaw, the owners, ROBIN and ART HILL, have decided it’s time to go bigger at their Wilmington location – literally.

“The taproom was too small when we moved into it. The customers don’t really have any elbow room,” Robin Hill says. “I actually feel guilty about being there because I’m taking up valuable space.”

After about a year of searching for a fresh venue, the kombucha – a fermented tea drink – taproom is moving from 102 Old Eastwood Road to 4107 Oleander Drive in Anderson Square in space that was the home of Tazy’s Burgers and Grill. And, because the new location allows them to make some changes, the Hills purposely designed the staff office there to be small and uncomfortable – the better to encourage themselves and their employees to interact with the customers again, Robin Hill says. 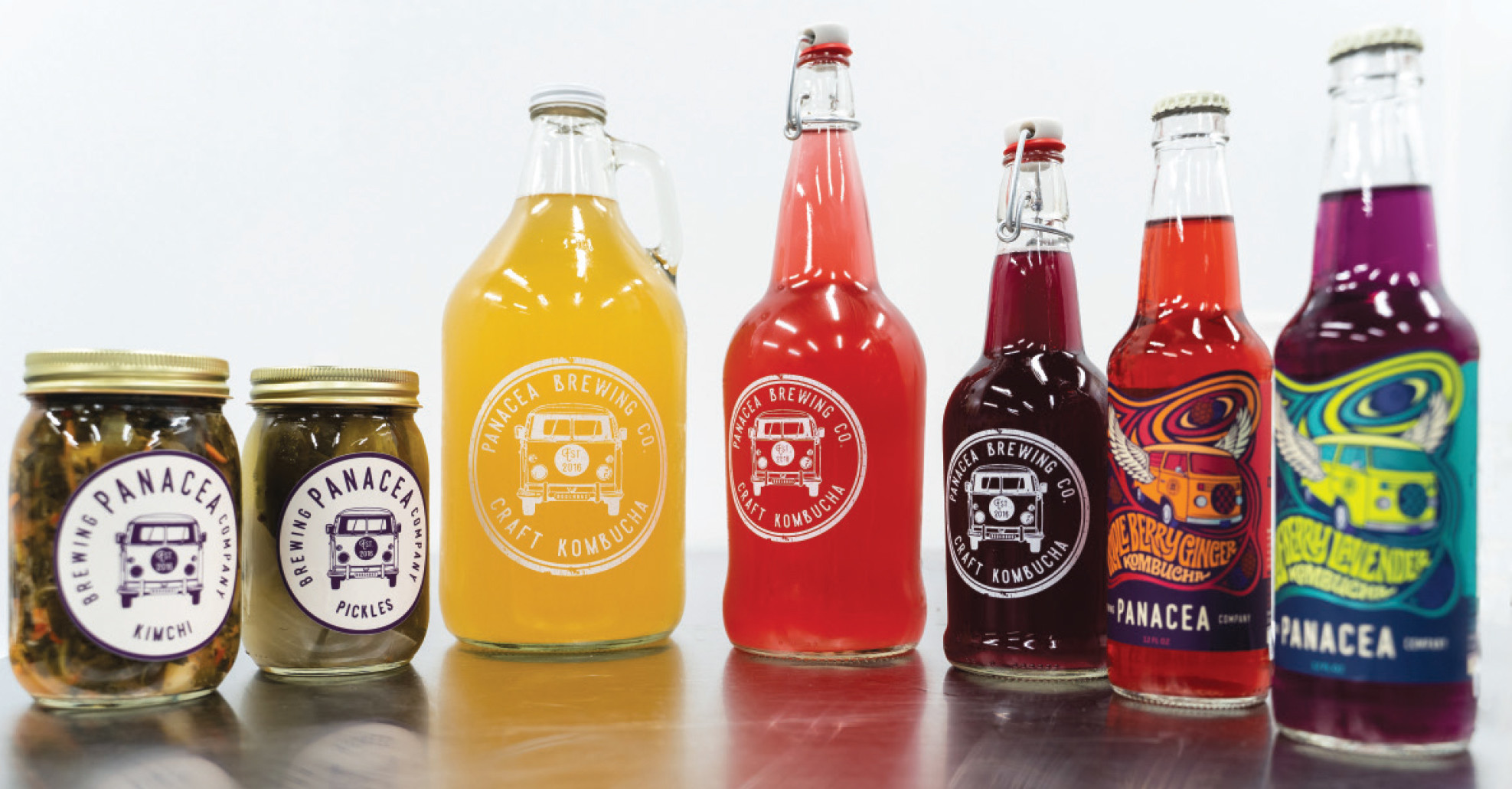 With a brand new liquor license in hand, accommodating the tastes of all of those loyal customers should be easier than ever. The craft, small-batch kombucha will still be the main attraction, but alongside some fermented concoctions – made from simple syrups, herbs, and flowers for color and flavor – local craft beer, wine, and herbal sodas will also be on tap at the new location.

There are even a few cocktails and mocktails in the making. The Blueberry Balm Cocktail, for example, consists of Blueberry Balm kombucha; simple syrup made from blueberries, elderflower, lemon balm, lavender; and St. Germain elderflower liqueur.

“We like to kick it old school, go with things that aren’t necessarily popular right now, but were created for a reason,” Robin Hill says. “But, we are getting creative.”

That creativity and a drive to push past the norm are what got the brewing company started in the first place. Panacea has certainly come a long way since it first opened.

After leaving New York for a fresh start on North Carolina’s coast, Art Hill joined New Hanover Regional Medical Center as its culinary department’s retail operations manager, and Robin Hill managed a sewing blog from her home so she could still work with her hands and be a stay-athome mom for the couple’s three kids.

“We just fell in love with the area,” she says. “Moving here was a big impetus for change.”

Art Hill is a trained chef with two decades in the food industry under his belt, and while he continued with his passion for making beer and wine, Robin Hill took to probiotic fermenting rather than return to a corporate or teaching career. Panacea Brewing came into being, and it didn’t take long for demand to spike.

“We got so busy that Art had to quit his job to work there full time and help us keep up,” Robin Hill says.

“But, that’s more who he is anyway. Startup has always been his thing.”

Featuring mostly vegan and vegetarian fare, Panacea’s new accompanying food menu is expected to be full of fresh vegetables, fruits, homemade tempeh, and koji. The idea, Robin Hill says, is to give customers a casual café atmosphere. The building itself isn’t undergoing any extreme construction but more of a refresher under the trained eye of Kelly Waters, Panacea’s current administrative assistant. Waters came from an interior design career in Savannah and has been able to put that experience to good use during this transition. 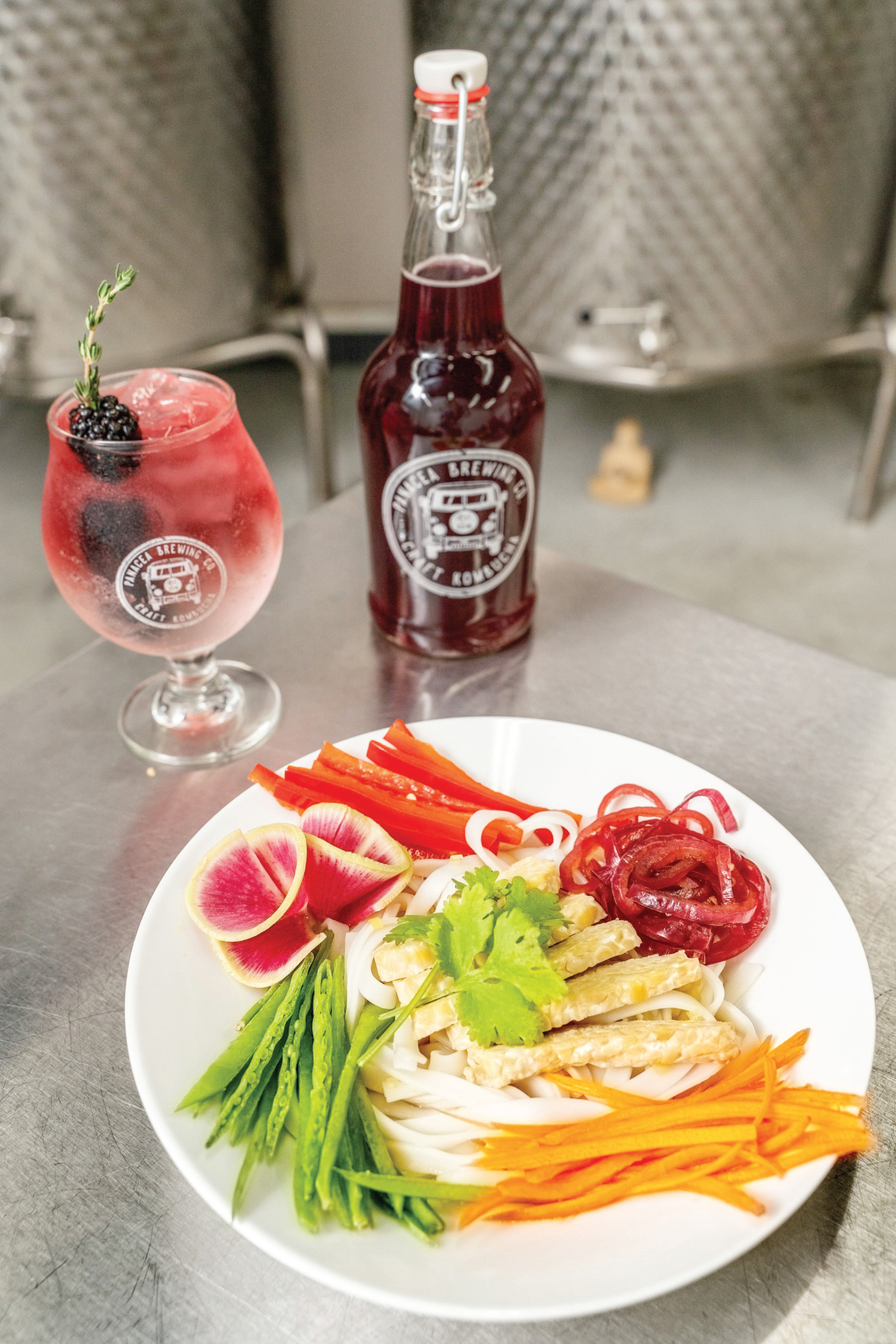 “It wasn’t necessarily our plan to open a restaurant when we first got started, but we’re both creative people, and we love using our hands to make new things,” Robin Hill says. “It all just came together.”

As soon as the new taproom is open and ready for business – possibly by the end of the year, but if not, then soon after, they say – Robin Hill also plans to put her teaching skills to use with some classes on fermentation. These will be held quarterly at first, she says, but she’d like them eventually to become a monthly occurrence at Panacea Brewing Company. There have been several requests made in the past, but with the smaller space, the answer has been a consistent no. Soon, having room to learn won’t be a problem.

Which brings us to business number two.

“We wanted to figure out how we can expand our brand to make it more timeless,” Robin Hill says. “It’s not about being trendy. We got really lucky here, but kombucha might not always be the next big thing. We want to expand our footprint.”

To that end, Burgaw Brewing Company is on its way to the Pender County town. Unlike the new Panacea taproom, the historic building at 103 South Wright Street needed more of a build-out.

The renovation took it down to the walls, gutting everything else to make way for a farmer-friendly beer pub and kitchen that’s coming along at a steady pace.

“Right now, we’re just taking it all as it comes,” Robin Hill says. “It’s always been about making good products for good people. That’s it.”