Ten Wilmington youngsters took their first bows from the stage last month, thanks to a Wilmington Parks and Recreation Department initiative called Spark the Arts.

“They pulled it off; I am so impressed,” says ROSE-MARY HARRINGTON CHAPMAN , a local playwright who modified one of her scripts for the young people to perform.

Her play, called The American Dream , was part of Spark the Arts Live Onstage Showcase December 5 at the Hannah Block USO/Community Arts Center. The showcase also featured dance and choral music, with participation from youth involved with DREAMS of Wilmington and the Blue Ribbon Commission. The ten The American Dream actors were drawn from the MLK Community Center, where they participate in after-school programs.

Also involved in making The American Dream happen was the Thalian Association, which manages the Community Arts Center and encourages young talent through its own Youth Theatre Program.

The spark behind Spark the Arts was KIM ADAMS, a program specialist with the city’s parks and recreation department. A playwright, Adams is an avowed believer in the transformative power of arts education.

She landed a grant from the national organization Youth Service America to fund the production. At a meeting of the Port City Playwrights’ Project, she met Harrington Chapman and convinced her to simplify a play about migrants crossing the southern U.S. border so it would be appropriate for youngsters to perform.

Putting together a stage production is a complex undertaking. It’s even more of a challenge when your cast is reluctant to take part.

“When I introduced them to Rose-Mary, they were so disengaged,” Adams says of her actors. “Then, a couple of leaders emerged and got the others in line. They started getting into it and seeing what they could do. One memorized his lines right away, and when the others saw that, they all started memorizing their lines.

“Rose-Mary was good at telling them clearly what she expected,” Adams adds. Getting The American Dream ready for an audience was a six-week process that extended beyond actual rehearsals to drama coaching and cast discussions. Those discussions, according to Harrington Chapman, focused on such topics as what it means to be an immigrant, what it would be like to cross the desert on foot at night, and what items they would need to survive in the desert. 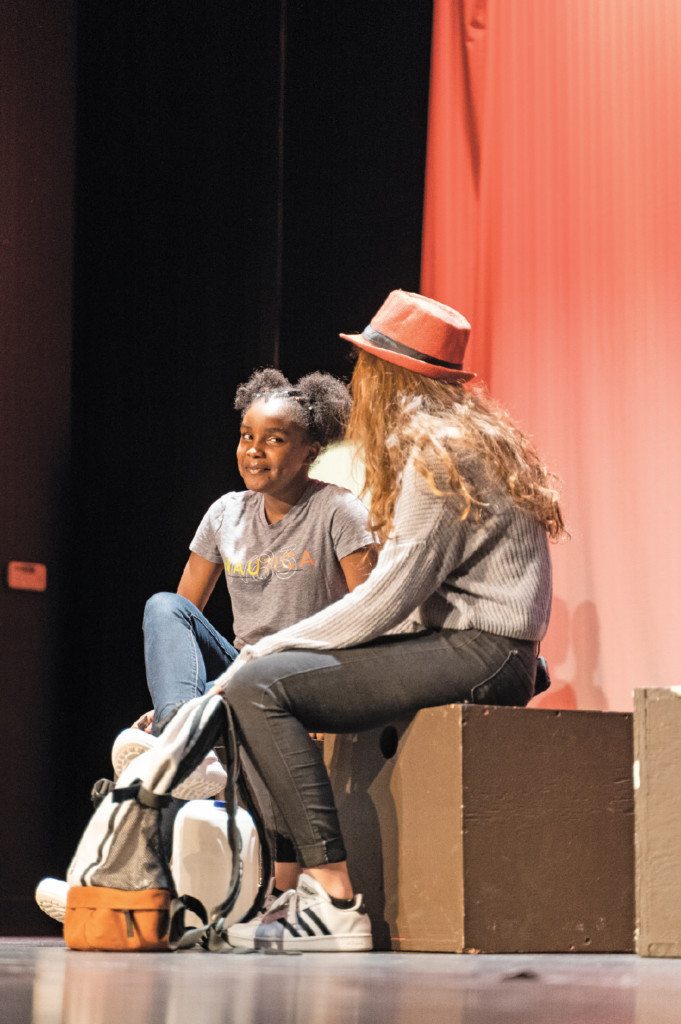 They talked about the fact that tens of thousands of kids have crossed the border alone, she says.

The cast began to take ownership of the play.

“It was like night and day between when we started and the performance,” says BRITTANY DICKSON, a Wilmington recreation coordinator who worked with the young actors and took a role herself. “None of the kids had any performance experience; some had never even seen a live performance, and they weren’t interested at first. They would put their heads down, and they would talk instead of paying attention.”

While the Youth Service America grant covered only the production of The American Dream, Adams’ work with this group of ten began last summer when she engaged them in outdoor activities offered for young people through her department.

“It started with them learning to swim,” she says. “They had been splashing around in the water every day for years without learning to swim. We were teaching them to be confident. I wanted them to go kayaking, but they needed to be comfortable around water first.”

Kayaking came later, along with zip lining and rock wall climbing. Adams says she could see their self-confidence grow.

The stage lights may have dimmed, but Spark the Arts’ personnel believe they have planted a seed in the players.

“It was wonderful to see these very talented young people onstage and very exciting that some are planning to audition for our Youth Theatre production Xanadu Jr. ,” says SUSAN HABAS , Thalian Association’s executive director.

“Being a part of a production involves the discipline and other character-building activities necessary to becoming successful and productive adults. Our goal is not just success onstage but success in life,” sats Habas.

Adams’ vision for future arts programs extends beyond the footlights.

“I would love to create a drama group and take (members) to a live show, like a (touring) Broadway show at the Wilson Center,” she says. “I also want to do another grant – this one, for visual arts – and work with kids on looking at a painting, asking questions, and thinking about what’s in the painting.”