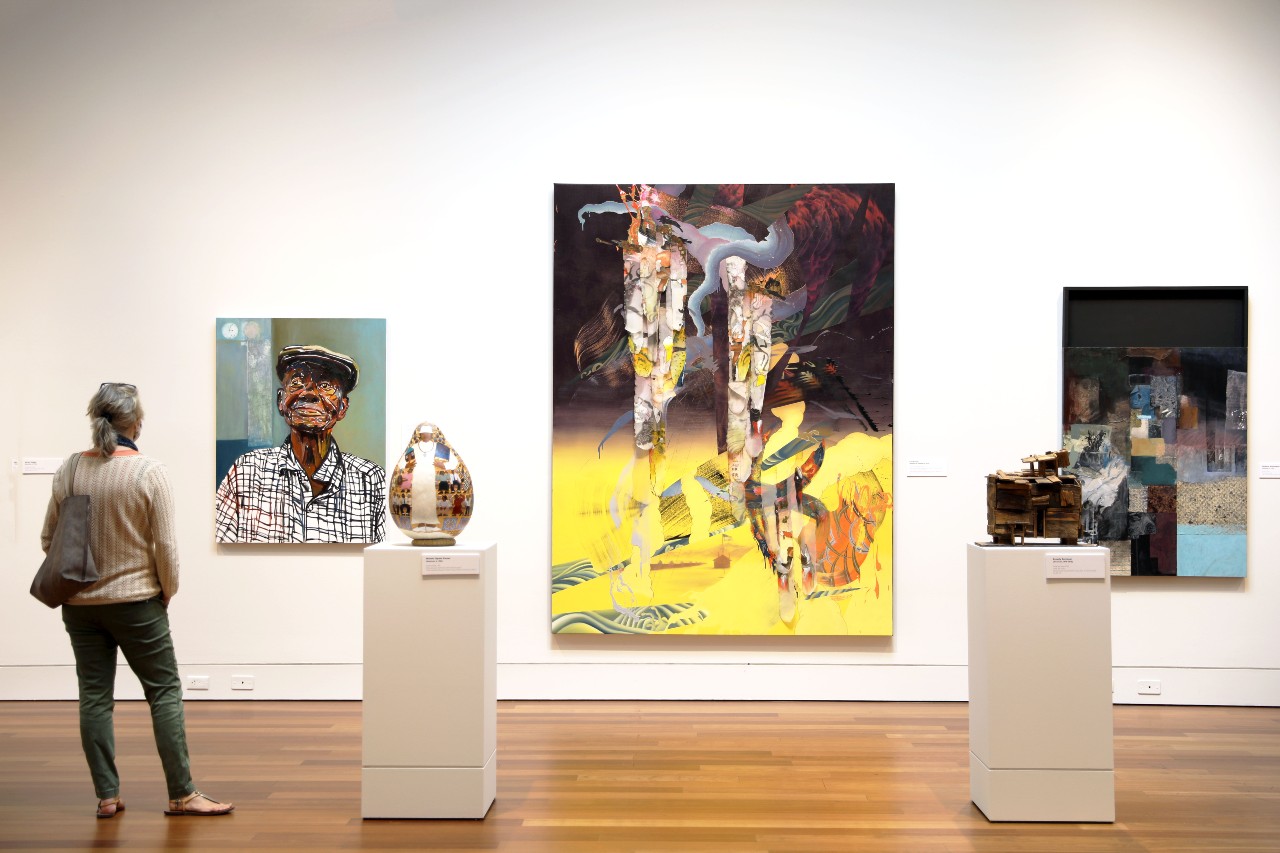 On the back wall of Cameron Art Museum’s latest exhibit, “She Persists,” two rows of fourteen heads look like everyday mannequins at first glance.

As viewers closely approach, it becomes vividly clear that this small portion of MARY BOWRON’s (1933-2017) hand-sculpted women have no mouths and concerned looks in their eyes—a far cry from emotionless plastic on view while window-shopping. According to Bowron’s artist statement, they represent a “crowd of silence and fear.”

“Silent Witness” leaves viewers asking more questions than garnering answers: What are these women hiding? What have they seen? Where have they been? What have they gone through? Why must they be silenced?

It’s an overarching theme for CAM’s celebration of the ratification of the 19th Amendment, which turned 100 in 2020. “She Persists” displays works of female artists who fought for their dreams, stood up for their beliefs and spoke out for the equal right to vote in 100 pieces from CAM’s 3,000-deep permanent collection.

“We wanted to look at the ways in which the women in this exhibition persisted in their own ways—women artists have to overcome so much differently than male artists,” deputy director HEATHER WILSON says.

“With so many female artists in our collection, I wanted to share with the public works from all walks of life, all races, and all time periods from past to present,” curator Bob Unchester says.

83-year old AUDREY FLACK is one. The artist got her start as an abstract expressionist painter, who would often showcase objects of the female world: perfume bottles, lipstick, and Madonnas. She switched to photorealism along the way and was the first photorealist painter whose work was purchased by The Museum of Modern Art. She evolved into a sculptor and has Medea (pictured below) on display in “She Persists.”

“Audrey Flack is a feminist artist,” Wilson tells. “She was the first person to be in ‘Janson’s History of Art’ text—both she and MARY CASSATT. Both are in this exhibition.”

The sculpture of Flack’s mythological figure comes from her vast research on goddesses. The story of Medea tells one of revenge. Medea’s husband, Jason, left her for a Greek princess, Glauce, and as the story goes, Medea was accused of murdering her own children and Jason’s new wife in an act of passionate retaliation. 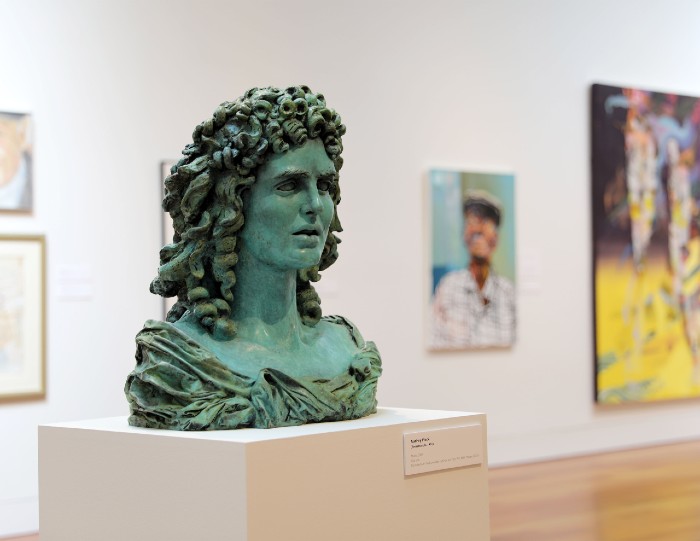 “Audrey believes Medea did not murder her children,” Wilson says, “that it was a patriarchal construct and story told so she would carry the blame.

“You can see her lips are parted,” Wilson adds, pointing to the cast-iron sculpture. “She wants to speak her truth.”

The exhibition features a handful of impressionist works from Mary Cassatt (1844-1926), who freezes feminine moments in time, from a woman dressing at the wash bin, to holding a child, to writing a letter, to visiting with friends.

“One of the things I discovered while prepping the exhibit was that Mary was an ardent supporter of suffrage,” Wilson says. “She had a suffragist friend she painted, and she was in a couple shows to raise funds for suffrage… She painted what no other artist was: the woman’s sphere. She painted women with a woman’s gaze, as they were, not as objects—as they were, living their lives.”

CAM has dedicated an area in “She Persists” to African American female artists as well. The exhibit recognizes the ratification of the 15th Amendment, which prevents the denial of voting based on color, race, or previous condition of servitude. One of Wilmington’s most famed artists, MINNIE EVANS (1892-1987), has a multitude of works on display.

“Minnie Evans is a local treasure,” Wilson says. “She was the first female artist we acquired at CAM. Art was her calling from God—who gave her visions. She had to do it. At the same time, she had all the circumstances of her life to tend to and take care of, but it didn’t stop her from making art.”

Evans’ work crosses Southern folk art with surrealism, as her pen-and-ink, crayon, and wax images came to life in her dreams before taking shape on paper. Evans was a domestic worker for Pembroke Jones near the Landfall subdivision at Wrightsville Beach. Later in life, she worked for his widow, Sadie, at the Airlie Estate, now known as Airlie Gardens. Even after the land was sold to Albert Corbett, Evans held the title “gatekeeper” until retirement in the early 1970s.

“The women in this show had to overcome so much—because of gender, familial responsibilities, and race,” Wilson tells. “We’re trying to tell their stories of suffrage. When the 19th Amendment passed, it didn’t guarantee the right for African American women to vote. So, even if the 15th and 19th amendments mandated the right in the Constitution, in the South, they found lots of ways to bypass that through literacy tests, poll taxes, and plain ol’ intimidation.”

“They were portraits of her life,” Wilson explains. “She started doing them in New York to recreate the vernacular Southern structures… She would do works of art on places of historical significance because of slavery as well.”

Greensboro native and Duke professor BEVERLY MCIVER—who was named one of the top 10 painters in Art in America magazine in 2011—tells the story of estrangement from her biological father in the painting “Taxi Driver” (pictured below). McIver didn’t meet him until she became an adult and was inspired to do a series of paintings. 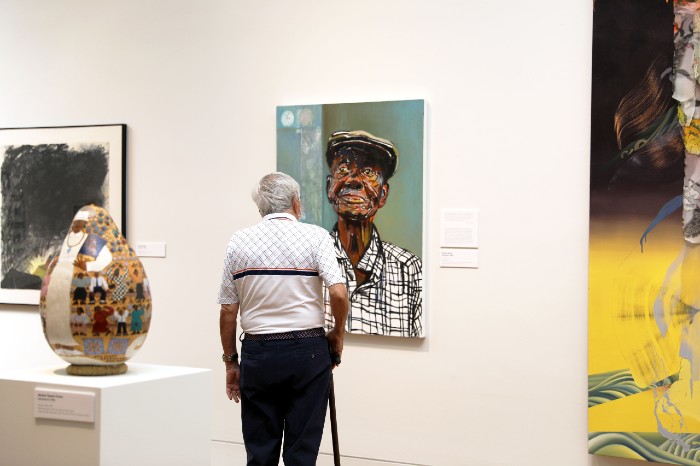 “The brushstrokes of different colors on his face emit so many emotions,” Wilson says. A taxi map is embedded in the portrait, a tip to his career, as are two clocks—one with jumbled time, the other completely blank.

McIver utilizes art to focus on race, gender, and even disability, the latter of which is inspired by caretaking for her young sister. This part of her life is captured in an Emmy-nominated documentary, “Raising Renee” on HBO.

“She has a lot of powerful stories told in her work,” Wilson says. “She lived in a housing project in Greensboro growing up and witnessed members of the KKK shoot and kill people in her neighborhood, and she was also bussed during the integration of the schools.”

In tandem with it being an election year, CAM has hosted a community-wide event and fundraiser, “The 19th Amendment Project: Community Art for All.” Participants purchased a $15 fabric tile to paint, sew, or decorate. Each tile represents one of the 122 letters of the amendment, with an additional 58 tiles representing freeform art, both showcasing artists’ expressions on what the 19th Amendment means to them.

The museum will display the 12-by-16-foot installation outside CAM on October 12, which will hang through the election on November 3. “She Persists” will be on exhibit through March 2021 and will include monthly outreach programs, like gallery talks via Zoom, concerts, and more.