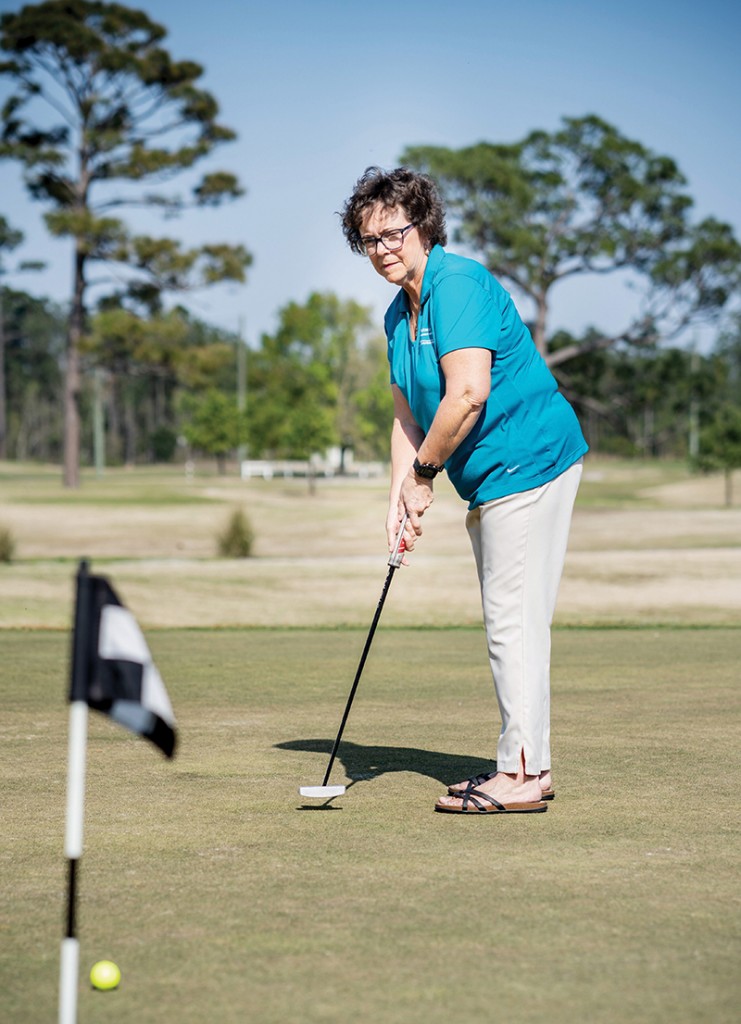 Other than putt-putt, JANE MCGANN first picked up a golf club at age forty-five. She took lessons, played at par-3 courses and driving ranges, and eventually competed in some national events.

“I can’t tell you how proud I was of myself, that I kept my head down and I concentrated,” McGann says. “I didn’t win at nationals, but I didn’t embarrass myself either.

The local chapter schedules a mix of fun and competitive golf events throughout the year, mainly from April through September.

“Since we have such great weather in North Carolina and we have so many wonderful courses near us, we don’t really put our sticks up in the winter,” says MEGHAN KOBELT, the local chapter’s president.

Competitive events may be flighted, or grouped by similar golf handicaps among players, Kobelt says.

The local chapter recently held a Spring Kick Off event in April at Rivers Edge Golf Club in Shallotte.

The group also sponsors the 2021 Women’s City Amateur Golf Tournament, scheduled for May 8 at the Wilmington Municipal Golf Course.

The Cape Fear/Wilmington chapter also provides educational outreach through seminars on golf handicaps and rules, as well as pro instructor-led clinics on short game, full swing, putting, and when to use certain golf clubs.

Networking is a benefit, McGann adds.

“You might have a business that you want to attract sports-minded women to,” Mc- Gann says. “By getting out there with other women, it’s a great opportunity to meet them and get some business or learn something.”

McGann credits the group with helping her during a battle with breast cancer about ten years ago and also with the loss of her husband, Jack, who died in November.

“The group has meant a lot to me, both as far as golf and socially, but also for emotional support. They’ve been wonderful,” McGann says. “It’s almost like a sisterhood, rather than just a golf group.”

Members must be at least eighteen. Annual dues are about $120 – with discounts for seniors, young professionals, and the military – and are prorated by quarter.

More information can be found at chapters.lpgaamateurs.com/chapter/NCCF or by emailing lpgaamateurswilmingtonnc@yahoo.com.