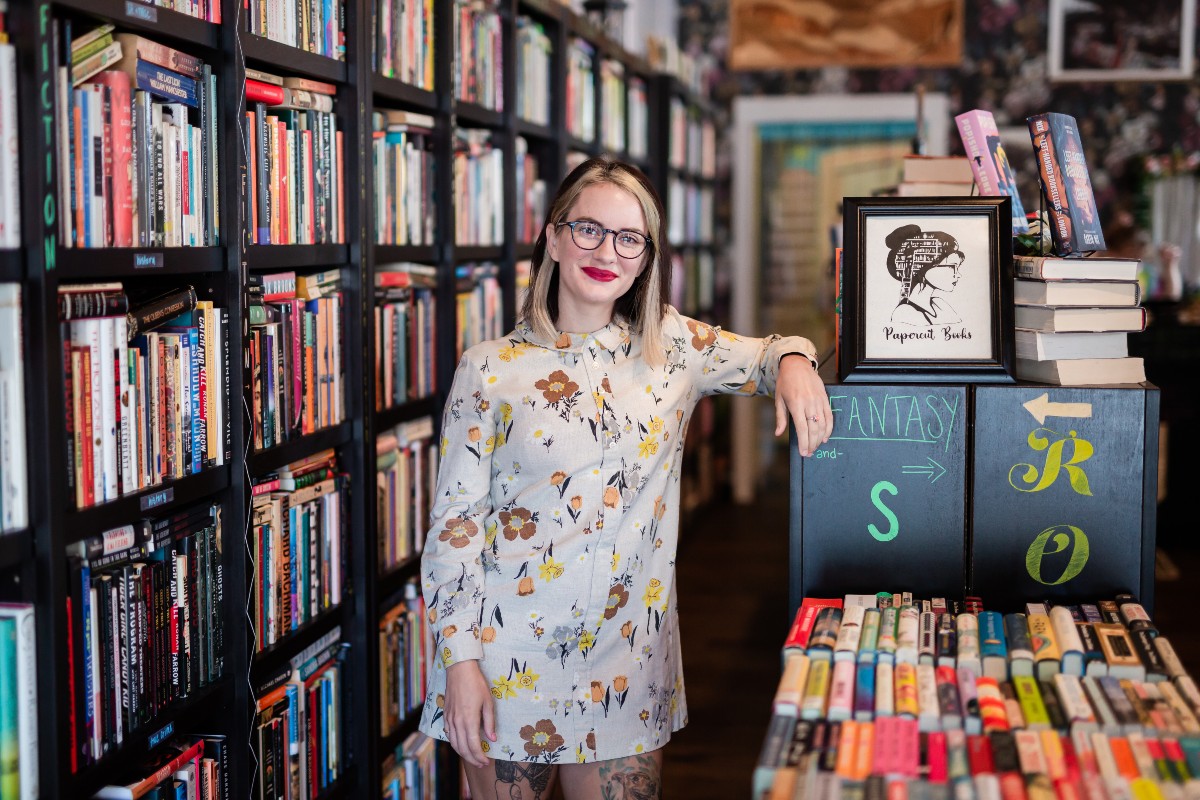 HOLLY BADER worked for her father in the family business for years until they had to close and sell that business. During the stressful months of negotiating the sale, Bader began to “read obsessively” to take her mind off her troubles.

Once the business sold, Bader explains she had “nothing to do, so ta-da!” Papercut Books was born.

Bader took her knowledge of running a major corporation and created the business of her dreams. The new independent bookstore opened at the end of July on the corner of Market and Second streets which Bader says she designed to be a very calm place to be.

“This is the business that is the opposite of a corporation,” Bader explains. “I have three employees versus the sixty I had at the other one.”

“I don’t think I had another option. This is me. Spooky floral is kind of the vibe,” Bader describes. “Flowers overcrowding a graveyard is my aesthetic.”

With tattoos that reflect that visual scattered across her body, Bader, a mother of two small children, proudly represents herself as the “Wednesday Addams of Booksellers,” as her husband describes her.

Bader debated whether to make Papercut Books “commercially normal,” but instead, aimed to take her sister’s advice to create the “place we would have wanted to go when we were little.”

Growing up, Bader describes having “a pretty feral childhood,” raised on 25 acres in Hampstead with nothing to do. Bader feels it gave her an excellent start, affording her the time to become a big reader, but she admits she did not love it at the time.

As an adult, Bader misses the quiet, restful spaces of her childhood, and Papercut Books tries to provide a soothing space for customers. The idea of “low-voiced art,” a quiet space for people who do not like to be overwhelmed, inspired Bader’s mood of the store to create “a calm environment to fight the stress of life,” she says.

“It is meant to be restorative instead of everything draining you all the time,” Bader explains.

The collection of both new and used books casts a wide net for potential customer interests and pocketbooks.  Bader is able to keep the selections fresh with tons of new releases, a wide selection of hard-to-find vintage mysteries, and everything in-between. Papercut Books also offers a free bookshelf on Second St.

Papercut Books will be starting a book club called the “Papercult,” which is currently in development.

“I am on top of what people are into and I am able to curate more and say, ‘here is what I think will be the best of the best,’” Bader says. “People want that version where it’s local, it’s us. The vibe of the store is they know what they’re getting and we don’t pretend.”