In the past year, simulation indoor golfing facilities have begun to pop up in the Cape Fear region, revealing a need for more accessible indoor physical activity spaces, especially ones with access to golf.

For those curious as to what indoor golf simulation is, it’s exactly as it sounds.

A golf simulator is set up with a tee and ball like you would find on a regular golf course, only the field you see is on a screen rather than in person.

Two new businesses, in particular, ROUNDS GOLF & LOUNGE at Mayfaire Community Center and CLUB GOLF INDOOR at River- Lights, are owned by individuals who love the sport of golf but noticed a considerable lack of affordable alternatives to the traditional golf clubs in town.

“I kind of saw a need for a place for the general public to just go and hit golf balls or learn golf,” says Rounds owner BRYCE EDMISTER. “For those who maybe cannot afford to be a member at Landfall, Eagle Point or Porters Neck, that’s really the only option that people have these days in Wilmington, at least since all those the driving ranges had closed.”

Edmister, a former PGA player with family ties to the sport, recalled how he would go to the golf range before and after school with his father. He wants to offer that same opportunity to other local families and individuals.

TINA and TYLER EVERSOLE (shown above), the co-owners and husband-and-wife duo behind the recently opened Club Golf, echoed a similar sentiment. Though they do not have the familial ties to golf as Edmister does, they recalled their fondness for the sport and how they became acquainted with it. 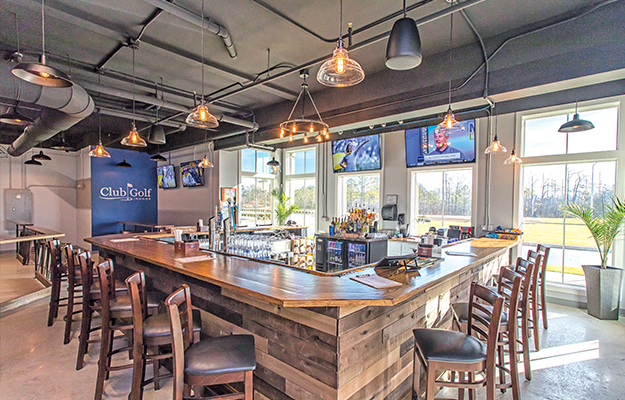 “I picked it up about ten years ago or so, and I just fell in love with the game,” Tyler Eversole says. “We just started going out on Saturday morning and playing together and then started getting into some couples leagues together.”

This became more difficult, though, as the couple had and began raising their daughter. The Eversoles began looking for their own golf simulator that they could use at home but soon realized they did not have the space for one. This is when they came up with the idea to create a business around indoor golf simulation.

Tyler Eversole says that the couple’s love for the game led them to the decision to open their own golfing facility, and the addition of a bar was more of an afterthought.

“We kind of started to think about how many other people maybe have an hour or so and want to get some kind of physical activity in,” Tyler Eversole says. “And, who doesn’t enjoy a drink while they’re doing that as well?” 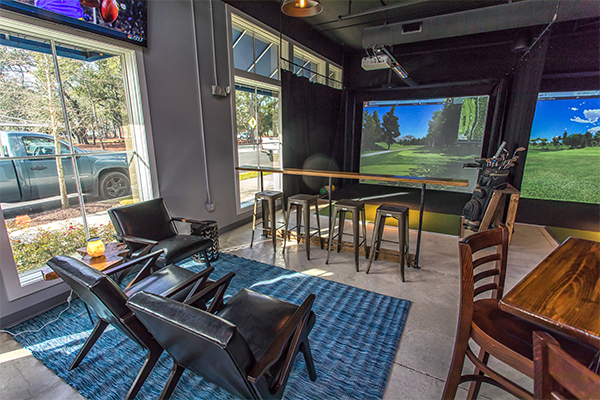 Edmister also wanted to provide locals with a quick and easy way to seek out physical activity.

Aside from the quick round of golf one can play, Rounds offers zombie dodgeball, a quarterback challenge, baseball pitching, cricket, rugby, kicking field goals, hockey shooting, and even soccer. There are endless possibilities when it comes to simulation.

“There’s also what we call Showdown Golf, and it’s really a bunch of interactive golf games for those who may not want to go play a round of golf but still want to hit the golf ball,” Edmister says. “It’s very similar to the Topgolf game where you are trying to just hit the ball into a target.

“Even if you’re not very good, you could like these games and you could score some points,” Rounds owner, Bryce Edmister says.

Edmister also says that the games offer the opportunity for friends to play together.

What both businesses have found is that a variety of people are interested in having access to indoor sports activities.

“I think when we were building the business model we had a couple key demographics that we thought would really latch onto this,” Tina Eversole says. “What we found is that every skill level, from experienced golfer to someone who’s never swung a club before, can come in here.”