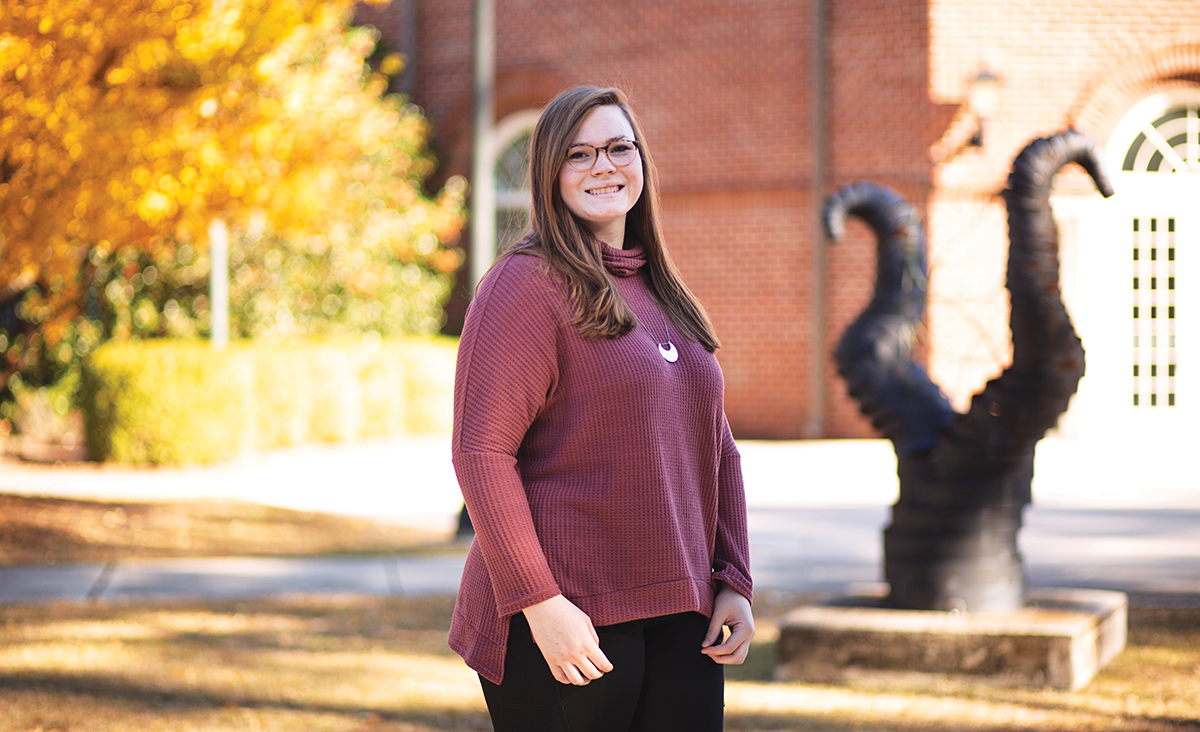 The year 2020 marked an important centennial anniversary: The passing of the 19th Amendment that allowed American women the right to vote.

For artist and UNCW instructor ANDI STEELE, the 100th anniversary of this milestone inspired the idea for the current gallery exhibit through the university’s Cultural Arts Building called XX: Women 2020.

“There were so many important subjects brought up in the year 2020,” says BILLY-GRAY WEATHERLY (above), director of the CAB Art Gallery. “We wanted to get a woman’s perspective on the year and reactions to the events that were happening.”

The virtual exhibit (click here to view the exhibit online) opened in late January and will be online until February 19. Although the opening was originally slated for late 2020, the date was postponed in hopes that the University of North Carolina Wilmington gallery would be open to visitors again. As of press time, however, the gallery was still closed due to COVID-19 restrictions.

But, the breadth and diversity of the exhibit’s artwork have not changed. The collection features a variety of self-identified women artists in a variety of mediums.

XX: Women 2020 coincides with the launch of WCACarolinas, a regional chapter of the Women’s Caucus for Art open to both North Carolina and South Carolina artists. To the best of Steele and Weatherly’s knowledge, this is the only chapter in the state of the national group.

“A group of local artists and myself had come together to start the regional chapter,” Steele says. “This show (is) our inaugural exhibit … That’s where it all started.”

The purpose of the Women’s Caucus for Art is to support women artists in many ways.

“Our chapter is brand new,” Steele says, “but some of our goals are exhibit opportunities, to take advantage of the virtual world we’re living in right now, do some virtual events, do some sharing of work (such as) virtual critiques … Really it’s a way for artists to network.”

Once the chapter is more established, Steele says they will also be focusing on another important component of the WCA mission: activism.

The exhibit serves as a way to promote WCACarolinas, which officially incorporated last summer. All exhibit artists are chapter members (becoming so either before or after applying to be included in the show).

Contemporary artist and Duke University professor BEVERLY MCIVER, who produces art that examines racial, gender, social, and occupational identities, served as the juror of the exhibit’s applicants. Weatherly estimated that there were about twenty-eight applicants who entered multiple selections. In the end, seventeen artists were accepted for a show of about twenty-five pieces, including photography, paintings, fiber work, and more.

“We left the criteria up to her (McIver),” Weatherly explains. “Whatever she saw would speak to what she knows the show is about.”

Both Weatherly and Steele described the final selections as “striking.”

The accepted work has been curated on a website called Exhibbit. The virtual gallery link is posted on the UNCW Cultural Arts Building gallery social media pages and website (uncw.edu/cabartgallery), as well as the social sites for the WCACarolinas chapter.