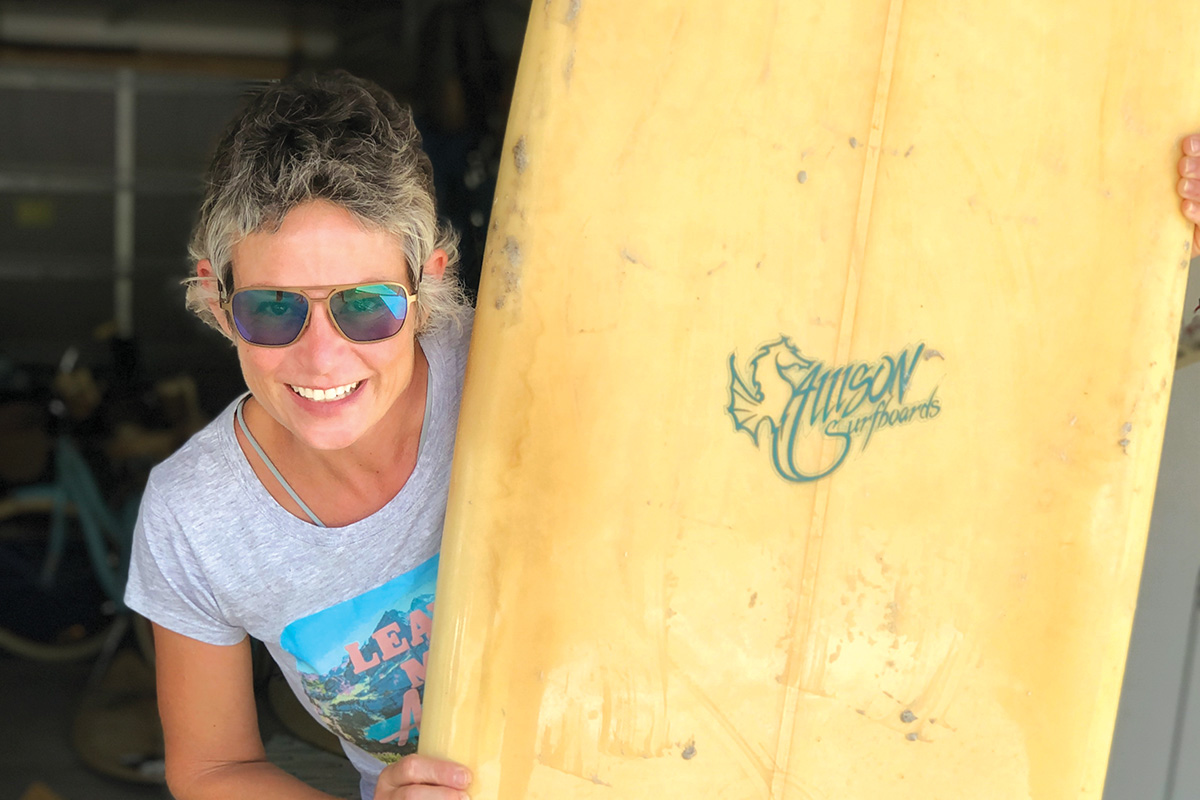 In March 2020, twelve Carolina Beach residents decided there “wasn’t enough art in our artsy town.” So, to fix that problem, MAUREEN LEWIS founded Carolina Beach Mural Project. Currently, Lewis serves as the president and founder of the project, which is a nonprofit organization that celebrates Carolina Beach’s history and culture through the installation of public art. Since its founding more than two years ago, the organization has funded thirteen mural installations and counting around the beach town.

“I had a blueprint for how to go about recruiting artists and commission them to do murals in Carolina Beach, celebrating our culture and our history,” she says.

In November, Carolina Beach Mural Project launched a program it’s never done before, Boards Across CB. After starting as an idea in May, the group collected sixty donated boards, ranging from donated surfboards to skateboards to boogie boards, all in varying shapes, sizes, and conditions. The project then found sixty artists to make the boards into art however they see fit. From there, the boards will be displayed all around Carolina Beach while also engaging with local businesses.

Uniquely, each board will have a QR code that gives patrons additional information about the artist, the inspiration behind their board, and bidding information.

“We were talking as a board and said, ‘Well, what do we do for the winter season? We don’t really do any murals,’” Lewis said, “How do we attract tourists to come down?”

To solve that problem, Carolina Beach Mural Project will incorporate scavenger hunts and various other entertainment as part of Boards Across CB to entice residents and tourists to visit the beach during the off-season. The boards will be on display in businesses during the winter months and auctioned off in February. Profits will be split 50/50 between the artist and Carolina Beach Mural Project, which takes earnings and puts them directly toward even more mural installations across the town.

One of the board artists participating is REBECCA WYATT, who decided to use her board to depict a mermaid body surfing.

“I’ve always loved the ocean, diving, and snorkeling,” she says. “The child in me wants to be a mermaid, so when I swim, body surf, or snorkel, I wear my mermaid monofin. My design is a mermaid body surfing. We see her like we would see a dolphin or turtle playing in the surf.”

“I’ve loved creating since I can remember,” Wyatt says. “Anything we create is art by definition. When I am experiencing intense emotions, it is therapeutic to express them with visual art, poetry, or music.”

Boards Across CB runs from November to January. More information about the project can be found online at carolinabeachmurals.org.