Sea Level to reopen with an all-vegan menu 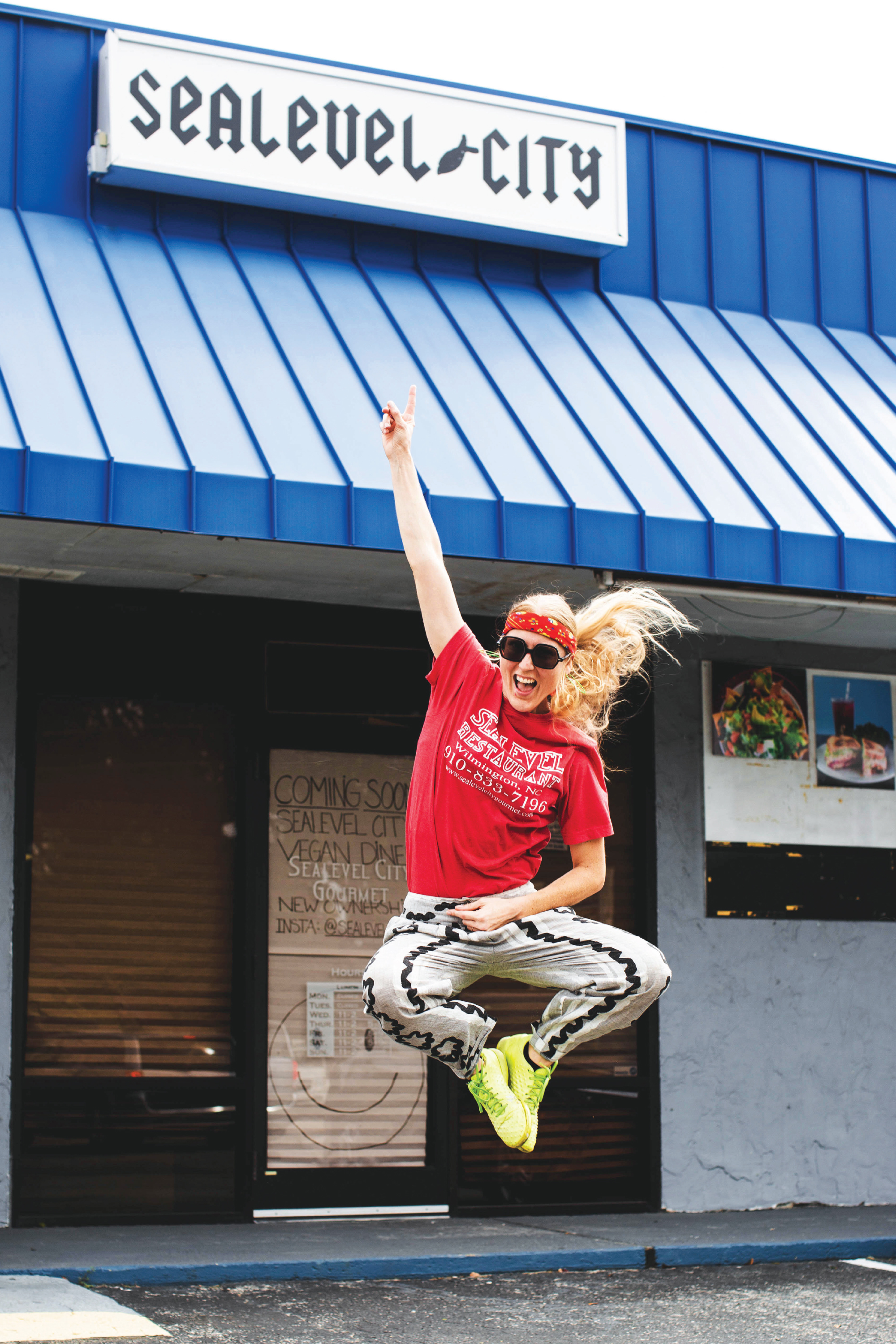 At the end of July, the news broke: The restaurant staple and vegetarian/vegan favorite previously known as Sea Level City Gourmet would soon reopen after a brief scare that its doors were closed for good.

Sea Level founder NIKKI SPEARS , the original owner of the Nikki’s restaurant in downtown Wilmington, sold Sea Level to KELSEY GIBBS and her husband, SCOTT KEY , when most folks didn’t even realize it was for sale.

While its location at 1015 South Kerr Avenue remains, under its new owners and with a modified name, Sea Level Vegan Diner’s updated menu will be completely – and unapologetically – free of all animal products.

Although Sea Level, which opened in 2013, was not previously 100 percent vegan (or even vegetarian), Spears always promoted plant-based menu items and specials. With favorites such as the lentil burger and falafel appetizer, Sea Level provided a place where veggie eaters could indulge.

Transitioning to a fully vegan establishment has not been difficult, according to Gibbs, who also is personally starting a new chapter, adding restaurateur to her existing role as owner of The Wonder Shop.

“Besides the random piece of cheese, some shrimp and fish items, it really was not that hard to adjust the menu,” she says about the tweaks.

Gibbs calls herself a “total indulgence-type person” with a passion for healing through food. On social media, she often posts videos of vegan recipes and step-by-step instructions for creating dishes.

“The food-service industry was always in our future,” Gibbs explains. “It just manifested a little quicker than we thought … When I heard Nikki was ready to move on and she was selling, I thought, ‘I have to consider this.’ It’s our favorite restaurant. It has to live on.” 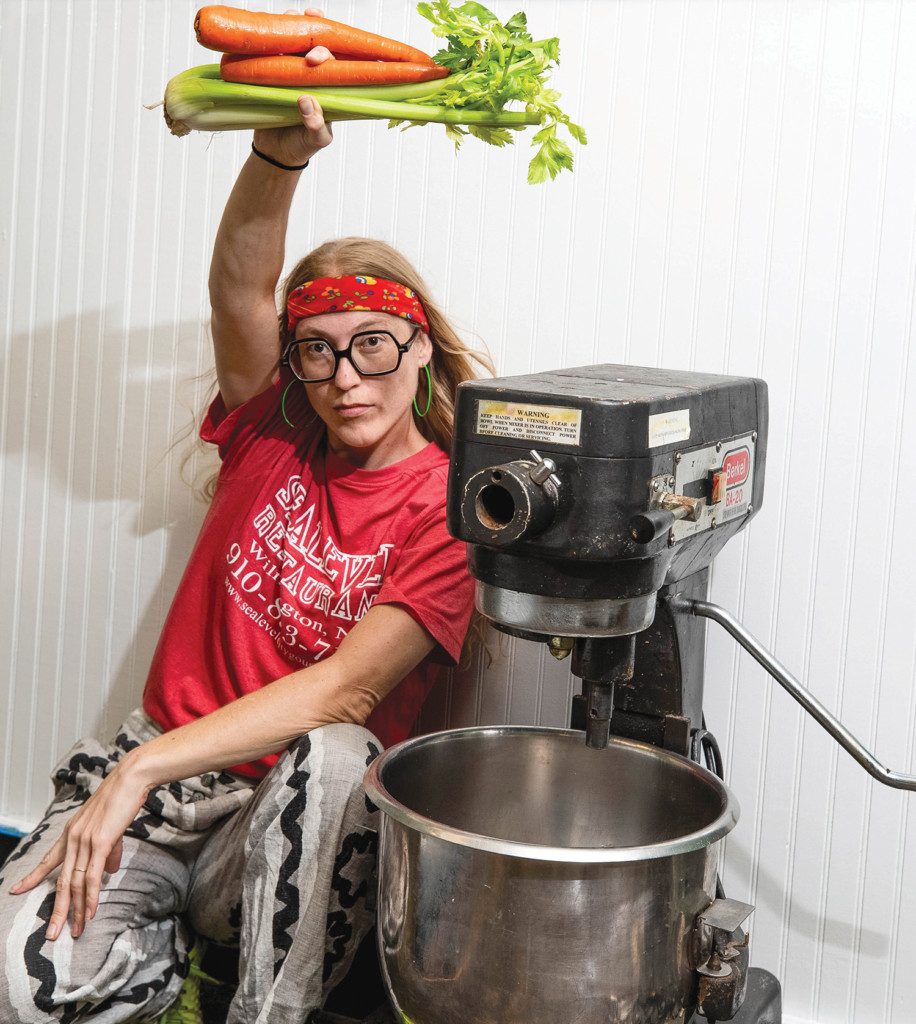 Others obviously felt the same way. The well-loved restaurant has been recommended by the plant-based foodie community since Sea Level’s inception. In fact, even before she and her husband bought the restaurant, Gibbs recommended Sea Level to customers at The Wonder Shop, her downtown vintage clothing store from which many may recognize her. (Don’t worry, fashion lovers: Her store isn’t going anywhere).

As Gibbs and Key have been redesigning and reconstructing the space, they have often received visitors offering gifts, gratitude, and even helping hands in appreciation – and anticipation – of the restaurant’s upcoming return. The couple is aiming to open this month.

Gibbs’ two loves – vintage and vegan – are born from her conservationist, organic spirit.

“Generally, our food norm is a resource-sucking nightmare,” Gibbs says. “It’s hard in this food world and all these chefs and their butchering needs. I really think this (vegan food) is a more sustainable approach to resources.”

She describes the Sea Level menu as friendly diner food (plus a sushi list, which Gibbs admits may seem a little random but still highly praised and requested).

“There’s so much variety in vegan cooking,” Kelsey Gibbs says. “You’re just using a different set of ingredients to get all the same favorites you grew up with as a kid.”

Not only is the restaurant’s new menu vegan, but its new owners are dedicated to using “clean,” organic products.

“Food is fuel,” Gibbs says. “Dirty food is going to clog you up. But, vegan does not automatically mean clean. Oreos are vegan! While we’re serving more comfort and diner-style food with plenty of fried options, still our famous lentil burger is made from organic, raw, soaked lentils.”

Gibbs and Key are inspired by fresh, homemade flavors. Their kimchi and sauerkraut will still be made in-house, and they’ll be sourcing from local farmers as much as possible. The only “faux” soy product will be tempeh on the Reuben sandwich, one of Key’s favorites.

Thinking about the word “sea” in the restaurant name, Gibbs has been exploring ways to reflect fish flavors and textures using plants. She’s crafted a barbecue- style “fish” sandwich using her secret ingredient, a common fruit that retains a flaky seafood texture.

“As a vegan, I’m not depriving myself of anything,” Gibbs says, “I’ve only added a rainbow of fruits, veggies, and legumes.”

Although Sea Level’s core menu will remain similar to what Sea Level lovers already enjoyed, Gibbs’ colorful creativity, as evidenced by her fashion sense and retail experience, will shine in daily food specials. She looks forward to exploring in the kitchen.

“We’ve sort of been in cooking boot camp with Nikki,” Gibbs explains with a laugh. “And, I have all these ideas for new dishes, but she keeps telling me, ‘Save it for the specials!’”

Sea Level won’t be recycling food in the same way The Wonder Shop recycles fashion, but it will reduce waste by highlighting surplus ingredients in specials, composting with Wilmington Compost Company, avoiding single-use plastics, and encouraging diners to use glass jars for leftovers.

“In both food and in clothing, you can do retail and food service in an environmentally (friendly) and thoughtful way,” Gibbs says. “Anybody could have done it. We just happened to be the ones in the right place at the right time.”