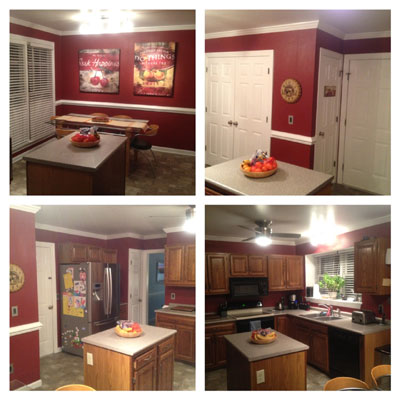 Since the Bowers moved from Middlebrough, England to a home in Wilmington’s Carriage Hills neighborhood near Halyburton Park, Joanne Bowers wanted to remodel the kitchen. The house was about 27 years old and the kitchen needed updating.

“We tried to shop around as much as possible,” she said about her first remodel.

“I assumed Lowes and Home Depot would have a better price than a specialty store, but they didn’t,” she said.

She met with MarKraft designer Lauren Morris and told her what she wanted and that she was open to ideas. A week later, Morris showed her some designs and gave her an estimate.

“I went back to talk with Lowes and Home Depot. MarKraft came back with the better price,” she said.

For about $15,000, MarKraft helped her select and install the kitchen cabinets, granite countertops and a custom-built island for her new kitchen.

“We wanted something modern but kind of within the age of the house. We ended up going with a Shaker-style cupboard,” she said. “We have pendant lighting over the [island] too. It makes it really pop.” 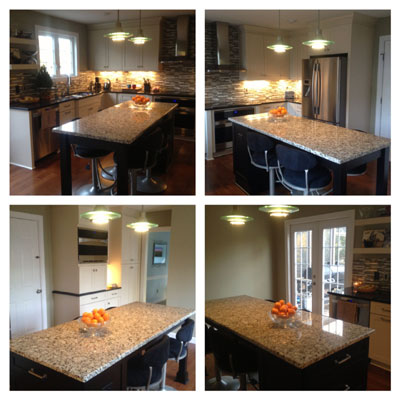 “I was asking questions all of the time and they were really patient with me,” she said.

Because it was a complete remodel where they even changed the configuration of the room, they worked with a contractor, electrician, plumber, painter and MarKraft Cabinets. It was particularly helpful that MarKraft ordered the cabinets and were able to hold them after they arrived until the Bowers were ready to have them installed.

After the work was finished, Morris conducted a walk-through with Bowers to answer any questions and to make sure she was happy with the work.

“Even after it’s done, you feel like you can keep coming back,” Bowers said.

She’s glad that she chose MarKraft, because of its guarantee on its products’ quality. She knows that if a cabinet gets damaged, they will replace it. She also feels like they were design-savvy and keyed into what would work, which made her more confident in throughout the process.

Markraft Cabinets specializes in cabinet and countertop design and installation in both new residential and commercial construction as well as custom remodeling projects. For more information, visit www.markraft.com or call (910) 793-2002.