At 50, the Wilmington Symphony Orchestra plays to the future 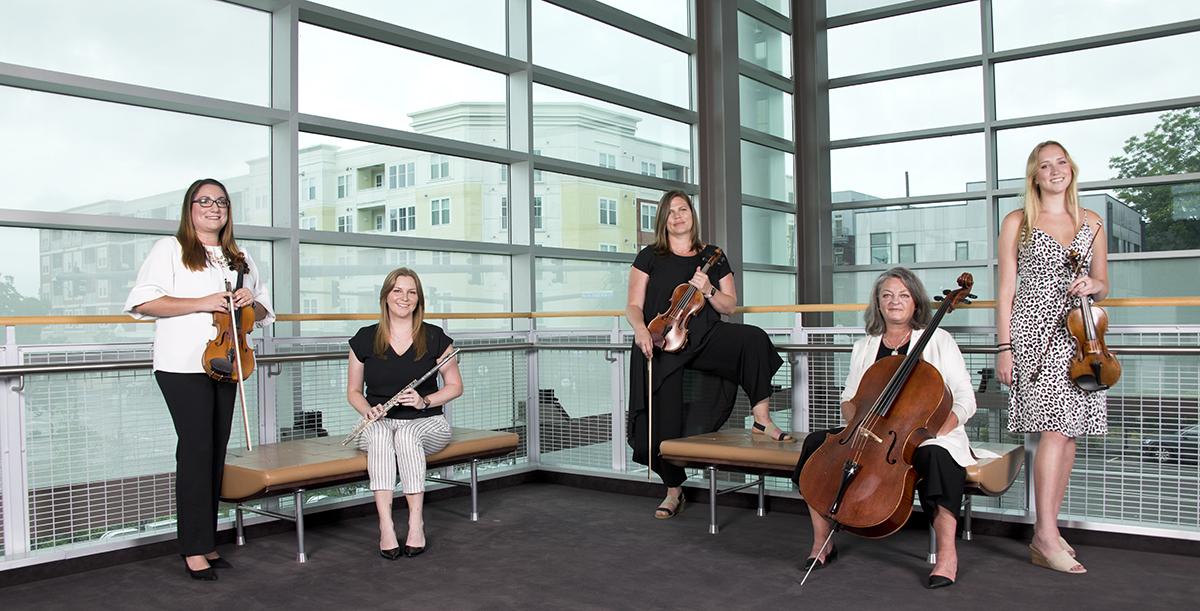 There’s more than a stage floor supporting the Wilmington Symphony Orchestra when it performs. The community ensemble benefits from five decades of leadership from musicians past and present. Many of those musicians are women.

It was two local women who spearheaded the orchestra’s creation in 1971. Violinists GAILE ZACK and VIRGINIA KUSLER wanted an ensemble they could play with. Not finding one, they cajoled several members of the University of North Carolina Wilmington Department of Music faculty into forming the UNCW Community Orchestra.

Zack and Kusler weren’t the only trained musicians hungry for opportunities to learn and play together. People from all over the community, working in any number of fields, devoted much of their spare time to practicing the music, rehearsing, and performing in the new ensemble, which evolved into the Wilmington Symphony Orchestra.

As the WSO celebrates its fiftieth anniversary this year and prepares for a full season ahead, it is paying tribute to its past but noting that the past is prelude to what lies ahead.

What lies immediately ahead is a return to in-person music-making. Symphony officials recently announced the orchestra’s 2021-22 season, which opens with a concert October 2 at its home auditorium, the Wilson Center.“We’re focusing more on where we’re headed, not what we have done,” says LIZ SCANLON, the orchestra’s executive director since September 2019. “And, we want to focus on the women who will create a new future.”

The organization is also recognizing the vital parts played by REED WALLACE, the executive director who retired in 2018, and STEVEN ERRANTE, WSO’s conductor for the past thirty-five years. But just like any band, the orchestra is looking to stretch and grow rather than defining itself by its greatest hits.

“My main focus since the day I got here was to start to reach out and create new audiences for the orchestra,” Liz Scanlon says, adding that two of her primary goals are to get children involved with classical music and to increase the number of young professionals attending the WSO concerts.

“We’ve had the same subscribers forever,” she notes. “We want to be the premier orchestra in town because we are so important to the community.”

The pandemic actually helped WSO’s leadership better envision the organization’s future, according to Scanlon. With the orchestra’s season shut down, many orchestra members agreed to use their time to work with the emerging musicians in WSO’s Junior Strings ensemble and Youth Orchestra. They helped prepare for the newest youth program, Rockestra, which will launch this fall. And they oversaw the proliferation of numerous chamber ensembles for the young musicians.

“For years we’ve wanted to do chamber groups, and we jumped right on it during the pandemic,” says DiLoreto, a violin instructor who became the WSO’s education coordinator in the middle of 2020. “It allowed (the kids) to make live music with their peers and to have social interaction.”

Enabling their middle- and high-school musicians to play in small groups was manageable during COVID restrictions, and participation grew as the months went on, she says, adding that chamber ensemble participation increased from twenty-five in the fall of 2020 to forty this past spring semester.

That was in addition to the young musicians’ involvement in Youth Symphony and Junior Strings, both of which groups practiced and performed virtually until in-person concerts became possible recently.

“It’s going to be so much easier, logistically, this coming year,” DiLoreto says of the chamber ensembles as well as the larger groups. “We also want to enlarge the youth presence at Wilmington Symphony concerts because we’re raising the next generation of musicians and concertgoers.”

As the orchestra expands its outreach to schools and youngsters who are underserved, former members of WSO youth ensembles are returning to share their love of music. An example is violinist Maynard. The orchestra was part of her Wilmington childhood.

“As a kid, I remember my mom (WSO cellist KATHY MEYER) rehearsing,” she says. “Being exposed like that makes it so exciting when you can do it yourself.”

In high school, Maynard played with the Youth Symphony and auditioned for the orchestra itself. After leaving Wilmington for college and graduate school, she returned a few years ago. As a Youth Symphony alumna and a rising leader in the WSO, she wants to see other young people have the opportunities she did.

“All the (orchestra) members are giving a gift to the community,” she says. “It’s important for music teachers to play with others and for youth to play in an orchestra. I’m very excited to be back.”