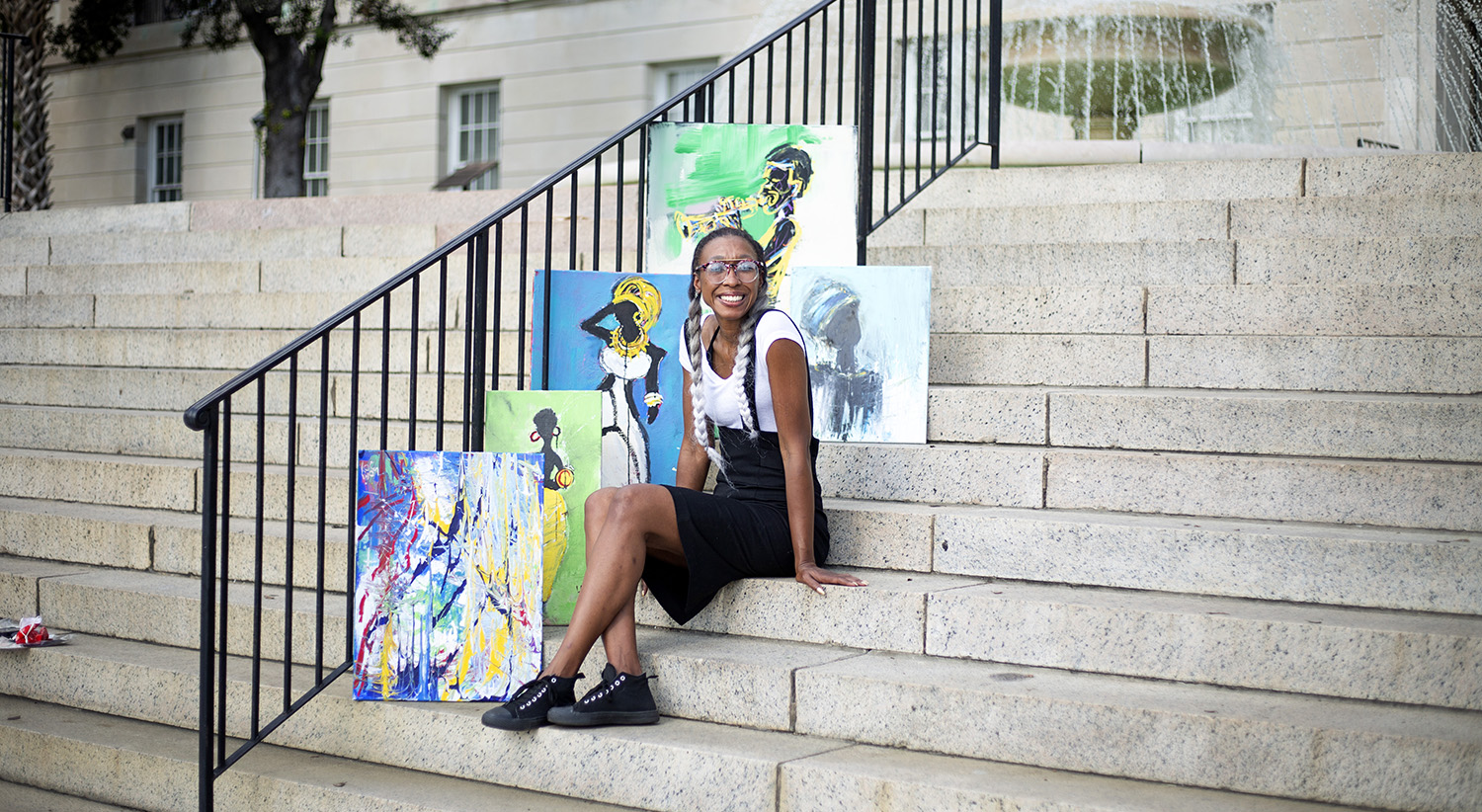 For this year’s Women to Watch Awards issue, we incorporated artwork from local artists to show their inspirations of strong women. Here is more about one of those participating artists, Lori Joy Peterson.

LORI JOY PETERSON came to painting a little later in life than most. At twenty-seven, after experiencing an illness and subsequent depression, she took up painting at her mother’s suggestion as a way to break the rut of sitting at home doing nothing. And, it stuck.

“It got to a point where I decided to show it to galleries, and they did not like it,” Peterson says of her initial work. “But, in my mind, it was good. So, I just kept at it. (Gallery owners) gave me good suggestions. They said, ‘You should take classes.’ I did not go to art school, but I took lots of workshops.

“Maybe I’m hard-headed, I don’t know. I just had it in my head that I was going to be an artist. I took it the right way I think,” she says. “I remember the first gallery I went to, the lady said, ‘I like your artwork, but your proportions are off.’ I showed my art to someone who was not an artist, and I remember he said ‘You should keep your day job.’ And, I thought ‘No, I shouldn’t.’ I just had it in my head I was going to learn. Because when I showed my work, the person would say what was good about it, but they would also say things like ‘Your color is off’ or ‘Your composition is off.’ To my mind, that means I need to take a class on composition. I would go and find a class on whatever they told me the problem was, take it, and learn (from) it.”

It turns out her instincts were not only right, but they’ve also led to a large following for Peterson’s kinetic style, which is emotional and full of movement.

A key part of her painting process is listening to music, whether it’s jazz, soul, or R&B. It’s how she gets her motion. And, she thinks her mother saw that musical bent in her first when she encouraged Peterson to join the school orchestra, in which she played all throughout school until the twelfth grade.

“I believe all the arts are connected. I believe my musical background and the poetry and the painting, they’re all interconnected,” Peterson says.

The fruits of that lesson can be found daily on Peterson’s social media, where she posts paintings, draws inspiration from her fans, and conducts the vast majority of her sales. While COVID has left many other artists feeling cut off and uninspired, Peterson has pivoted successfully to the online art world, selling her work, taking commissions, and even teaching live painting lessons. In fact, she posts that she’s doing just as well now during COVID as she did before. Which may be due, in part, to her innate ability to follow what feels right.

“I have goals, and I don’t have goals,” Peterson says. “It seems like when I don’t set goals, people ask me to do stuff, and it works.

“Sometimes if I don’t have any ideas, I write down an entire paragraph about what I want to paint, how I want to paint it, what colors to use,” she says. “But sometimes, I’ll just have a bright idea. You know how they say you’re left-brained or right-brained? I think I’m both-brained. Sometimes I’m logical, and sometimes I’m not,” she adds.

Peterson’s magnetic paintings, as well as her stubborn faith in herself and in her instincts, have made her a Wilmington favorite.

Her advice for anyone else who wants to be an artist?

“I would tell them it’s never too late to start anything,” Peterson says. “People need to get the idea out of their heads that people are born artists. I believe anyone can be an artist. Art is a skill that takes practice. There are people who can draw and it looks like a photograph, but they don’t use it. If I could do that I would, but I have to work for it; it didn’t come to me naturally.”