The rise of the mini-kitchen

We’ve all been there.

You’ve congratulated yourself on the fact that it’s Friday by indulging in two too many martinis (or in my case – high-gravity IPAs). You glance over at your boyfriend, and his face suddenly morphs into a crispy, buttery garlic knot. It’s this moment when you decide to chill on the libations and welcome a little substance into your evening.

The point here being: When you’re out on the town, the eating is just as important as the drinking.

Take a look at North Carolina’s food and beverage regulations, however, and you’ll find that not all establishments who serve booze are required to feed you. So, don’t expect a solid nightlife scene to boast any sort of culinary setup in the back.

As usual though, there are exceptions to every rule.

Case in point: The following audacious local business owners and chefs who say, “No kitchen space? NBD.” Regardless of limited square footage and resources, these three gems still find a way to crank out enormously impressive cuisine in itty-bitty environments.

THE FORTUNATE GLASS, Front Street’s swanky vino haven, bangs out stellar small plates to pair with its lineup of extensive bottles. This may not seem like a tremendous feat, but take one step into the prep area (well, maybe not during service), and you’ll see that this intimate bar is doing electric food with hardly any room to spare. 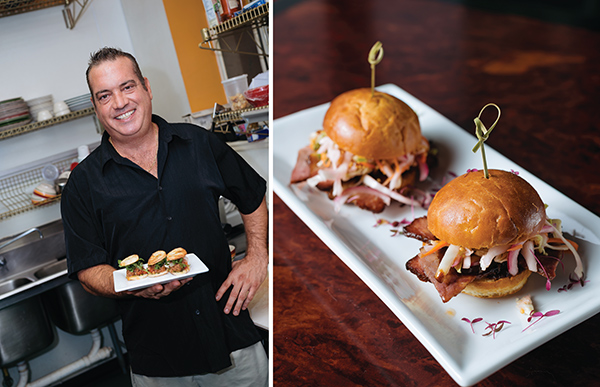 CHEF RYAN O’JANPA (above), Boone-bred and former kitchen rock star at manna, says that as a result of narrow quarters and barely any room for storage, he doesn’t take liberties of premade or frozen food. All sauces, dressings, desserts, and doughs are made from scratch.

Without the ability to bring in uncooked proteins, the artistic menu is built around epicurean cheeses, seasonal produce, charcuterie, and fresh herbs and spices. While some may find this tight atmosphere restricting, sous chef Kyle Martin (who honed his skills at equally solid downtown eateries such as Deluxe and PinPoint) says helping to create a weekly changing menu makes him a more imaginative chef.

It’s midnight, and you’re certain that the only option for late-night grub comes with pepperoni. Hang a turn down Market Street towards the river, and run (don’t walk) to BELLA’S BAR LOCAL.

Good cuisine in this town isn’t few and far between, but try producing extraordinary scratch-made eats in a kitchen so small you can hardly do the Macarena.

Utilizing a hot plate and something akin to a toaster oven, DENNIS MANCINELLI (above right) is magically manifesting food you’re probably overpaying for somewhere else in town (and not enjoying nearly as much).

Not only does Bar Local dole out high-quality fare – where else can you get Vegan Korean BBQ Lettuce Wraps at midnight – but it organizes locally themed events galore. 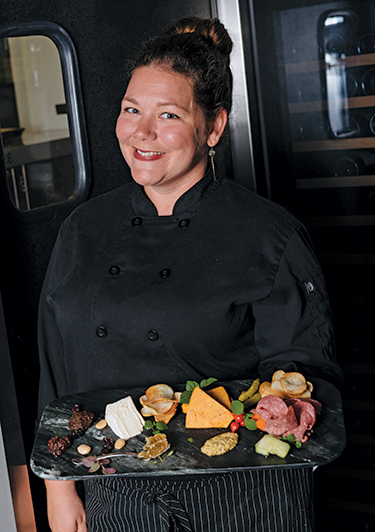 Need a little Somm with your OM? Check out the Vino & Vinyasa (sunset yoga on the Riverwalk) Mondays and Wednesdays, painting with Wilmington artist Nick Mijak on Tuesdays, and live music nearly every other night of the week.

Thanks to chef KIRSTEN MITCHELL (left), original proprietor of Vittles food truck, a pork belly grilled cheese can be life-changing.

Currently rocking a prep space with a bit more elbow room (but a bit less cooking power), this creative chef is now shaking things up at GRAND CRU, a relatively new wine and tapas destination in Lumina Station.

Of course, she’ll take the controlled air conditioning all day long but faces other challenges, like a workspace with a single convection oven.

Grand Cru’s opening night was a colossal success, but with tickets piling up and only so much fire to go around, Mitchell had to make the impossible possible.

“It was a miracle, but food always gets out. It just does,” says chef Kirsten Mitchell of Grand Cru's opening night.

Vittles could nail forty of those mind-blowing grilled cheeses at once, yet Grand Cru’s sole piece of oven equipment can only crank out two ﬂatbreads at a time. The good news? No one’s in a big hurry here.

The wine is leisurely sipped, and the food shared and savored. The amazement and delight on customers’ faces when they realize that such elegant plates are coming out of such a tiny kitchen makes every second worthwhile for both chef and guest. 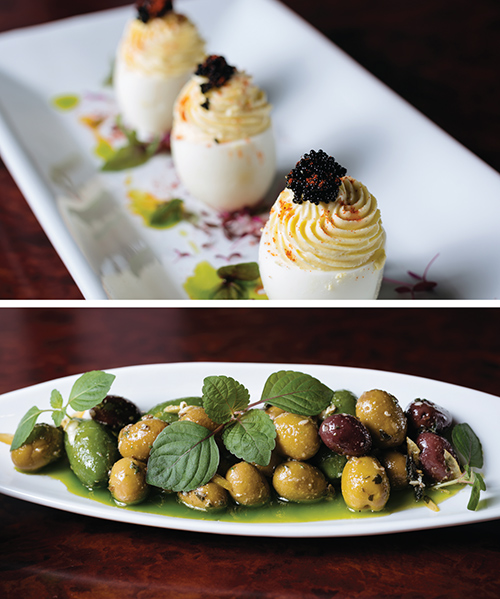 One mouthful of the trufﬂed deviled eggs dotted with caviar will have you grinning like a fool. While the food truck had Mitchell ﬂexing her cooking muscles via sassy, casual, global eats, at Grand Cru, she’s able to offer richer, more refined cuisine.

Mitchell’s passion for infusing simple ingredients with a bold flavor profile that always stars vinegar, salt, and spice comes through in every bite.

Keep an eye out for her fall menu featuring heartier fare such as duck cassoulet, lamb sausage, and a savory spin on a sweet classic: layered strudel with earthy mushrooms and goat cheese.