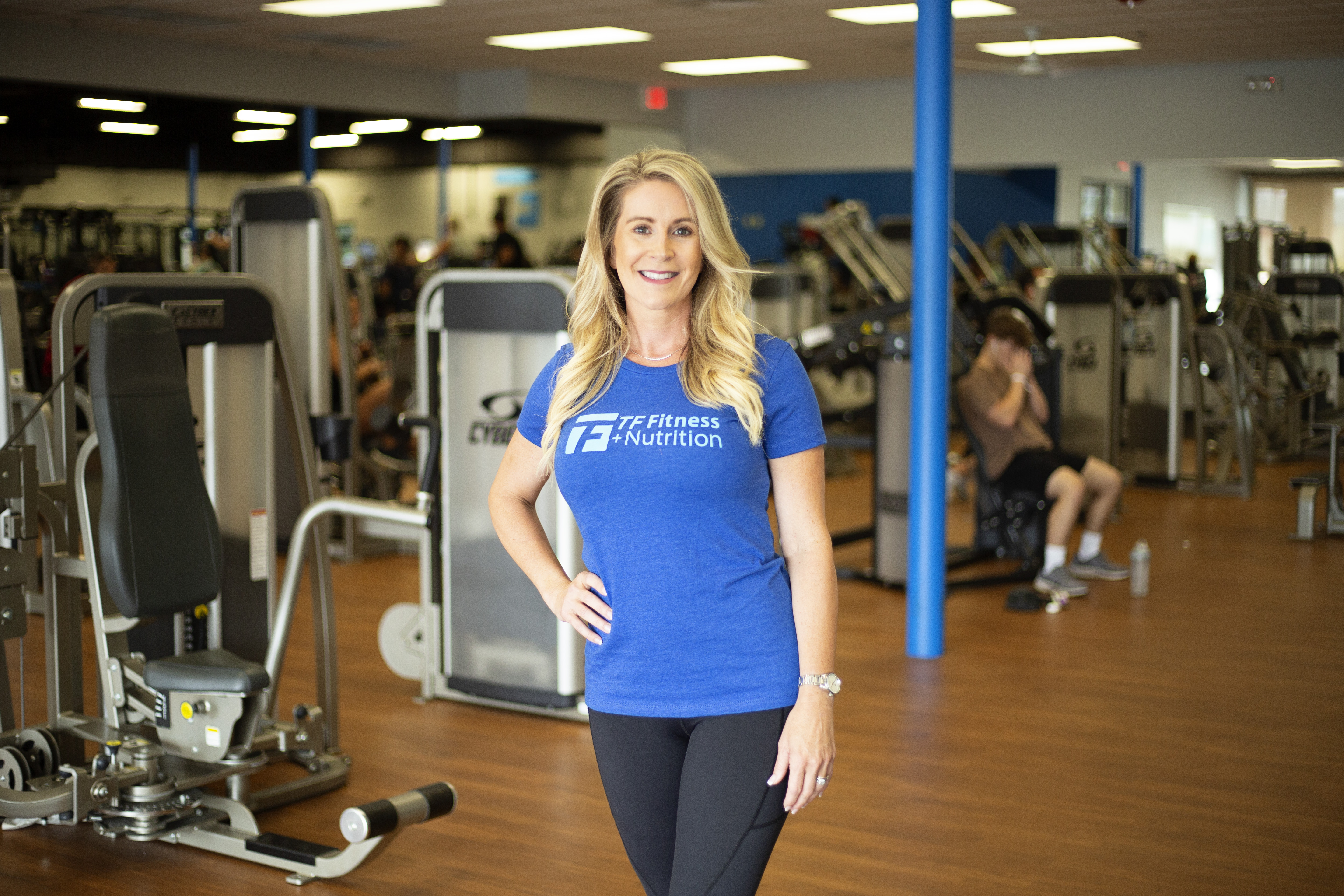 It is no surprise that HOLLY MANESS LENNON has put down both business and family roots in Wilmington.

The co-owner of TF Fitness clubs, and mother of five, spent many summers on Wrightsville Beach. She grew up with a house at the beach and attended the University of North Carolina Wilmington. She was drawn to the fitness world early on.

“I was a dancer and soccer player in high school,” she says. “Fitness, physical activity, and nutrition have always been a passion for me. I was lucky to learn at a very early age the importance of taking care of your body.”

That passion led her to start her career working for a Gold’s Gym in Durham in high school.

She went on to earn a degree in exercise science at UNCW and a minor in nutrition from ECU, while at the same time working at a Gold’s Gym in Wilmington.

“I had my manager at the time contact the owner of a Gold’s Gym here,” she says. “I started working in 1995 and obtained certifications in personal training and aerobics instruction.”

While working at the Gold’s in Wilmington during college she met Skip Lennon, who would later become her husband. But that would not be for a while.

“Skip and I met and dated in college while both at UNCW and both working at Gold’s,” she says. “Our worlds took different paths after college and we lost contact for many years.”

Their paths crossed again in 2014. Marriage soon followed and they became a blended family of seven. With their mutual interests in exercise, it was only a matter of time before a fitness business would be born.

“Skip wanted to bring a local club feel back to Wilmington, so in 2019, we opened our first (TF Fitness) location and then later that year, we went back to where we originally met and opened another one,” says Lennon.

With five kids and two fitness clubs, how does Lennon handle it all?

“Skip handles the daily operations while I still manage my other career and gym ownership,” Lennon says.

“Unless someone is complaining and then I say I’m just here to make smoothies,” she jokes.

Balance seems like an ongoing theme in the Lennon household.

When the coronavirus pandemic hit, TF Fitness, like other gyms in the state, had to permanently close.

“We were shut done on March 25 and were closed for almost 90 days,” says Lennon. Like with any business, it had a huge financial impact, but most importantly, Lennon was concerned for the health of her clients.

“Many of our members are military and first responders that utilize the benefits of physical activity to decompress from on-the-job stress and pressures and PTSD,” she says.

The gym opened back up with limited capacity on June 8 with the help of the Americans with Disabilities Act, Lennon says.

While many gyms in the region and state are still closed, some gyms, like TF Fitness, reopened in June using a letter from the state attorney general’s office that says they’re allowed to be used “when that use is prescribed by or directed by a medical professional” combined with privacy rights that do not require medical documentation to be produced for individuals using the reopened gyms.

“We have a large percentage of members that are here because exercise is their prescription of choice,” Lennon says. Currently, the gyms are operating at around 20% capacity.

TF Fitness has installed medical-grade sanitation systems and air purification systems, Lennon says. In fact, she says they have installed the same system used by the Mayo Clinic in their hospitals to be extra cautious.

Lennon admits being owner-operated is a challenge in itself. “There is always an emergency or sense of urgency,” she says. “Roof leaks, staff call-outs, fire alarms, it never stops.”

Her husband has been in the industry for 30 years she notes, so not much surprises him or rattles him.

She credits her staff with helping ease the burden. “We truly love this industry as well as our staff and our members,” she says. “They are our extended family.”