An electrical engineer, Jhansi Kandasamy has spent her career in the nuclear power industry 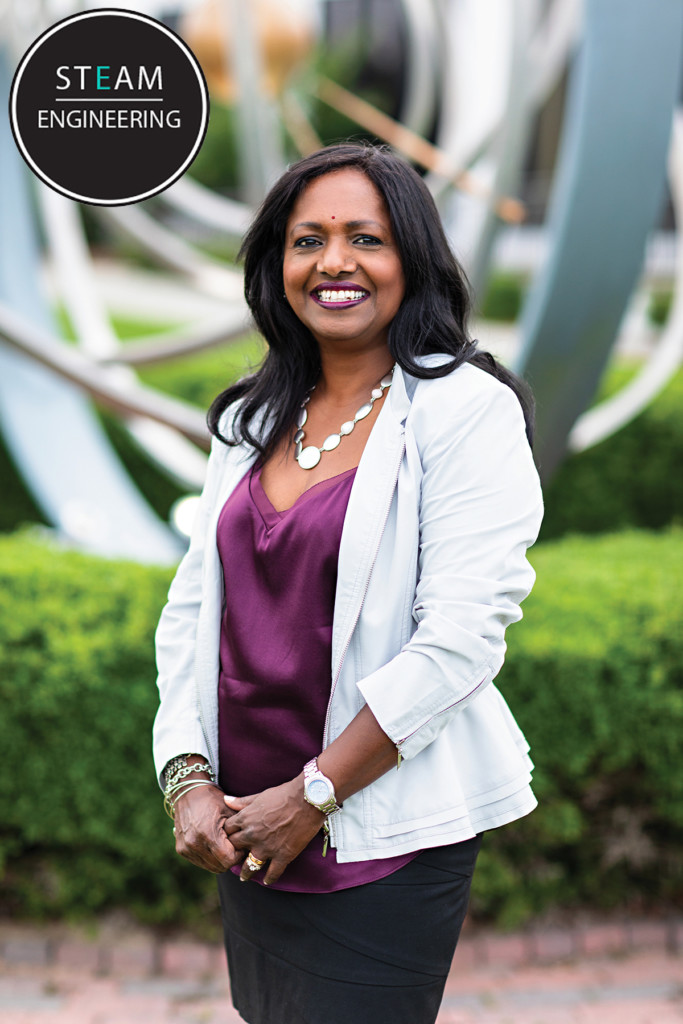 An electrical engineer, Jhansi Kandasamy has spent her career in the nuclear power industry, sparking connections within her own unit and among complementary units.

Regardless of her individual assignments over the course of thirty-plus years, her job has always been to promote the mission of the organization by identifying and solving problems.

“The common thread has been understanding the objectives of the organization and what the deliverables are,” she says, adding that in each position she has determined what part her own unit played in the nuclear industry and what it is responsible for providing.

Kandasamy figures she has worked in at least a dozen different capacities for a variety of nuclear facilities.

She came to her current position as vice president of engineering services for GE Hitachi Nuclear Energy in 2015.

“I started in engineering, went to different groups, and came back to engineering,” she says of her career path. “I’ve been in maintenance, operations, regulatory assurance – all around running the power plant. All project management, all these different jobs (until her hiring at GEH) at nuclear facilities. Sometimes, I had no background in the specific field.”

She tells the story of one job, running a facility’s chemical unit, with no more familiarity with chemistry than a basic college course. The unit was also the worst-performing one in the organization, and she was expected to turn it around.

“An education in engineering helps you put that structure in place,” Kandasamy explains. “It’s about being able to step back and assess a situation. You think about the ‘what ifs’ and become a problem solver. I took the data – why was this unit the worst in the fleet?”

Kandasamy developed a vision for the group and how it should ultimately look and perform. She created what she calls a playbook for how to get there.

One key to Kandasamy’s success has been her ability to forge relationships, both with coworkers and colleagues across the industry.

She is very active in the U.S. Women in Nuclear association, a growing organization of women in all aspects of nuclear technology.

In July, Kandasamy became chair of the 8,500-member association, part of a larger global network that currently boasts nearly 20,000 members.

“It’s a network of women – very strong engineers and scientists – and I’m proud to be part of it and lead it going forward,” she says, adding that although women make up only about 20% of those employed in the nuclear industry, the Women in Nuclear group is determined to increase the female presence.

One of the organization’s initiatives has been to establish a one-year program for women who hold above-mid-level positions in the nuclear industry. The inaugural class members were nominated by their CEOs or chief nuclear officers.

The goal of the program, according to Kandasamy, is for graduates to return to their companies and move up to the next level, pulling other women up behind them, she says.

“We’ve got CEOs and CNOs interested. They want to nominate women and sponsor their leaders,” she says. “We had twelve for the pilot and had to turn some away for the next class.”

Kandasamy’s plans for Women in Nuclear include even more extensive outreach initiatives.

“One of my goals is to make sure as many girls and women as possible go into STEM as possible,” she says. “Girls are brilliant, very creative, and innovative … We want them to shatter stereotypes, be really confident in their abilities, and blur or erase the invisible gender gap.

“They have the power within them to make a difference, to do whatever moves them. We need that diversity of thought and action.”