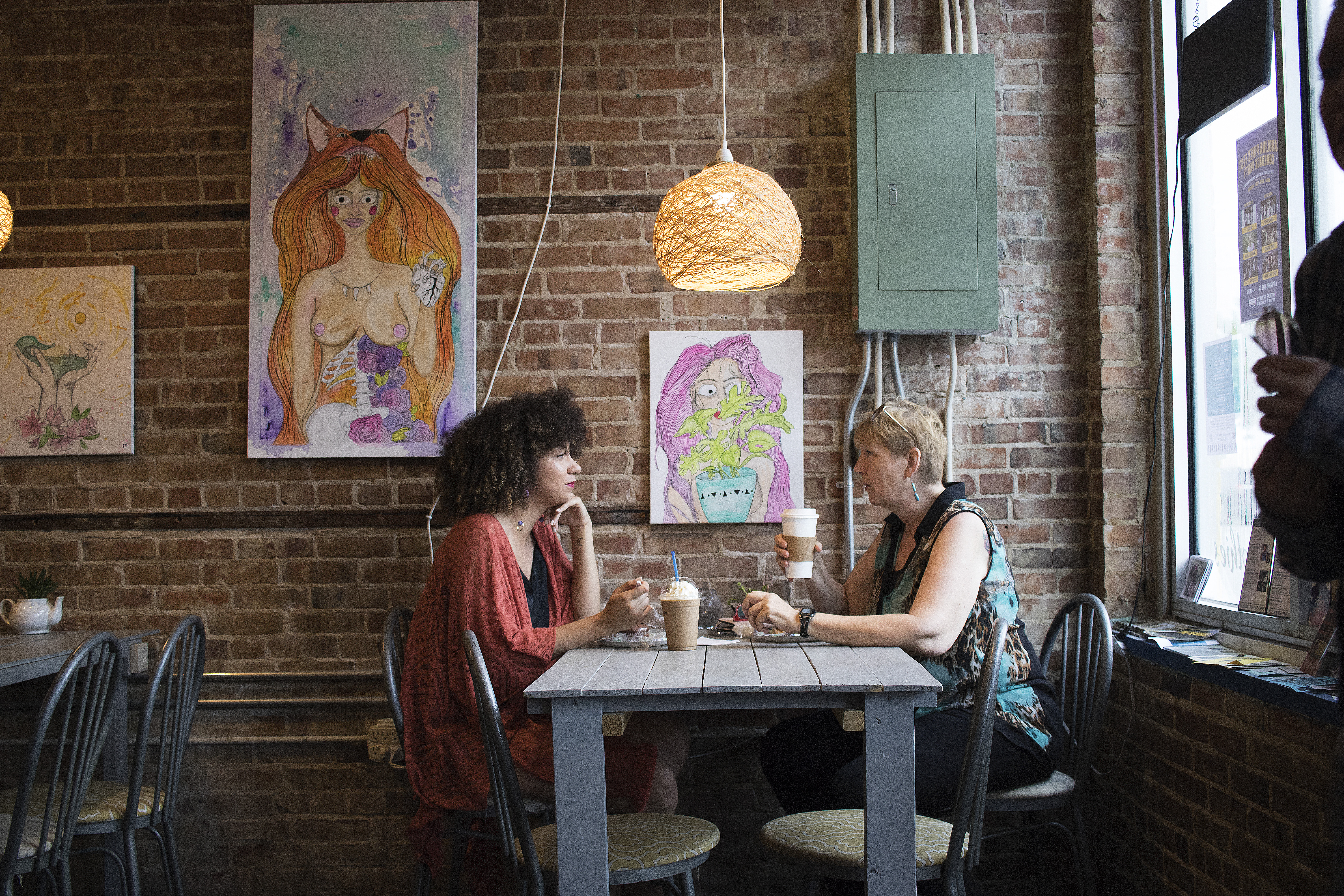 For years now, Wilmington has dubbed Castle Street its eclectic “arts and antique” district, an off-thebeaten- path destination brimming with creatively diverse shops and bright murals. But, the special vintage finds and galleries are not the only sources for a satisfying Saturday stroll. We can’t forget the stuff that, genuinely, feeds our soul: the food.

Between South Fourth and 10th streets, the district features six food destinations. If you prepare your stomach, you can try them all in one day for one breakfast-to-dinner extravaganza. 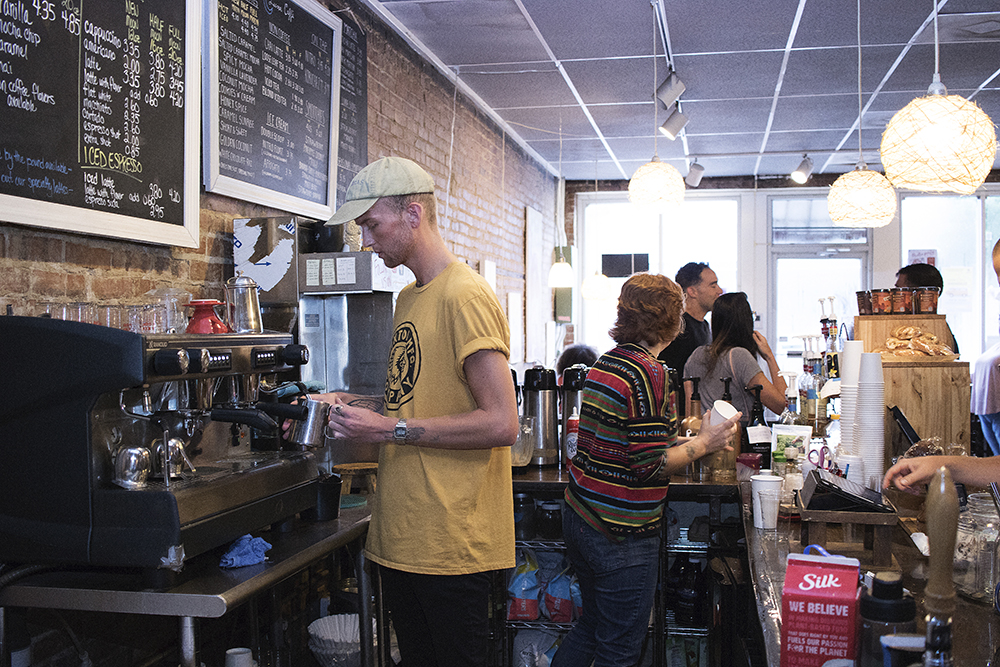 Let’s begin here, not just because it’s one of my favorite places, but because every good day starts with fresh coffee. Will Chacon and Nina Hayhurst-Chacon opened this gourmet coffee and espresso joint in fall 2013, and they’ve been winning the hearts of a diverse group cafe lovers (and their dogs) ever since.

Luna’s main brews come from Rev Coffee Roasters out of Georgia, but they strive to include local products such as breakfast sandwiches and burritos from The Lunchbox and sweet treats from The Veggie Wagon, Small Seed, and Neo Snacks.

And, if you’re not into coffee, don’t worry. Among their other teas and smoothies, they just added a full menu of matcha creations. I recommend the matcha smoothie, listed on the menu as the “Lori Smoothie” – I ordered it so often they finally named it after me, so I guess I’m a little biased. 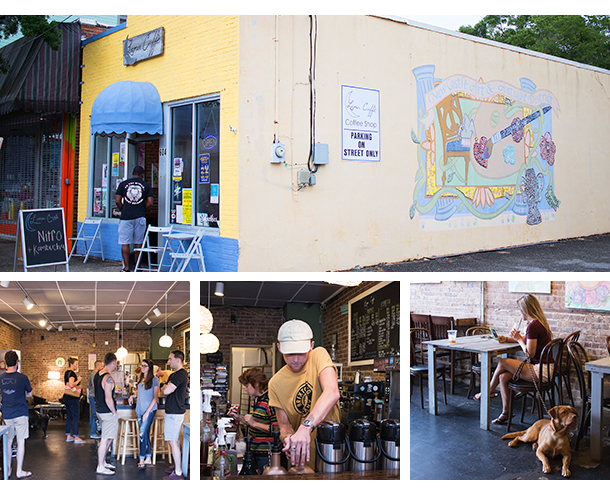 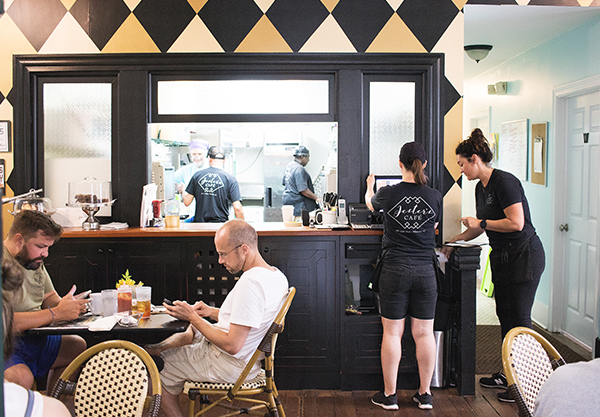 Across the street from Luna, this Castle Street staple inside the cute purple house offers a classic breakfast-and-lunch menu with a French flair. Through the charming front porch, the door opens to an immediate view of an open kitchen. With a kind greeting by the hostess, before the crowd gets in, early risers might feel like they’re entering someone’s home rather than a business.

Married couple Robert Powers and Sydney Penny purchased the restaurant in 2016. They recently gave the space a country-chic-inspired sprucing and officially added wine to the menu, including orange and peach mimosas.

The latter pairs perfectly with their best dish, the French toast casserole – three slices of heavenly baked croissant casserole with fresh berries, whipped cream, and pure maple syrup. I assume it’s listed first on the menu for a reason. Folks without a sweet tooth as large as mine will enjoy any of their homemade quiches or perhaps the strata, a casserole layered with egg, sausage, cheddar cheese, and hash browns. 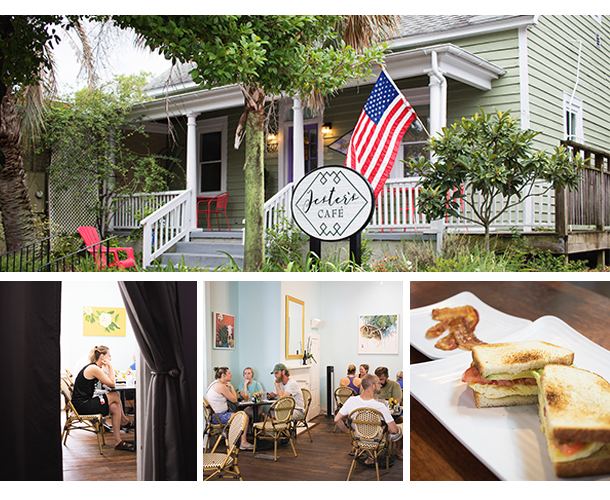 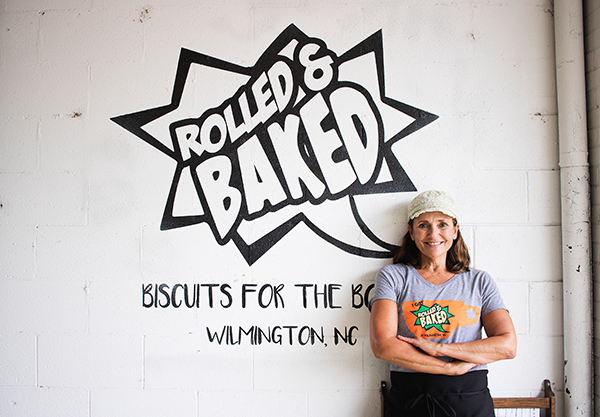 Our third husband-and-wife team, Bill and Annie Ward, joined the Castle Street food crew last summer. With a motto like “biscuits for the bold,” their menu successfully merges some unexpected styles with biscuits as the base (vegan and gluten free options, too!). My favorite is the Stop Kvetching, an everything biscuit with smoked salmon, a fried green tomato, pimento-dill cream cheese, and capers – a sandwich that raises bagel and lox to an even better level of tastiness.

“We’re all about the people, community, environment, and real food,” Annie Ward says. “We make everything from scratch. Really, everything.”

Rolled & Baked is certified as an Ocean Friendly establishment by the Plastic Ocean Project. They also compost for the community garden that grows steps away on the Fourth Street block. And, of course, the decor alone fits the “bold” bill, showcasing the intersection of mid-century modern furniture with comic-book-style art. 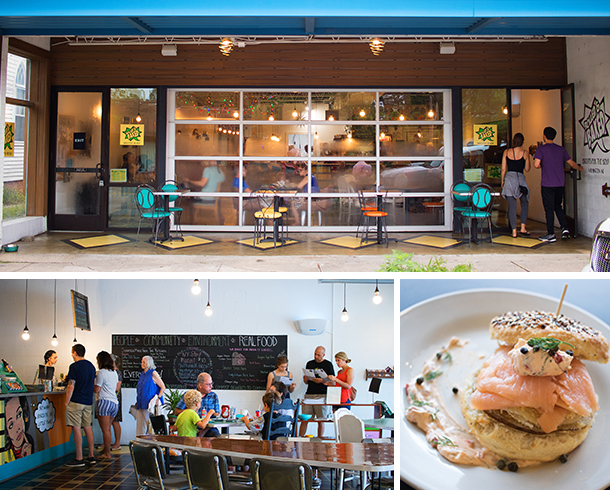 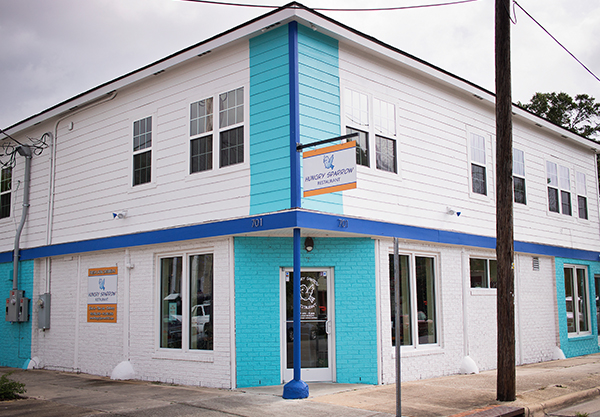 This new-to-the-scene Castle Street eatery brings us some much-needed culture. The Latin American cuisine at the Hungry Sparrow includes a full lunch and dinner menu, with favorites such as the Cuban midnight sandwich and chicken curry platter (on Friday and Saturday only). But, I come here because of the appetizers and small bites that remind me of the famous Versailles Restaurant in Miami’s Little Havana.

Owner-chef Ryan Khan cooks the homemade empanadas. The menu includes other classic Latin handhelds such as ham croquettes and arepas, as well as a twist on the classic yucca fries: “yuca bites,” yuca balls mixed with savory cheese and fried until crispy, served with garlic mayo. 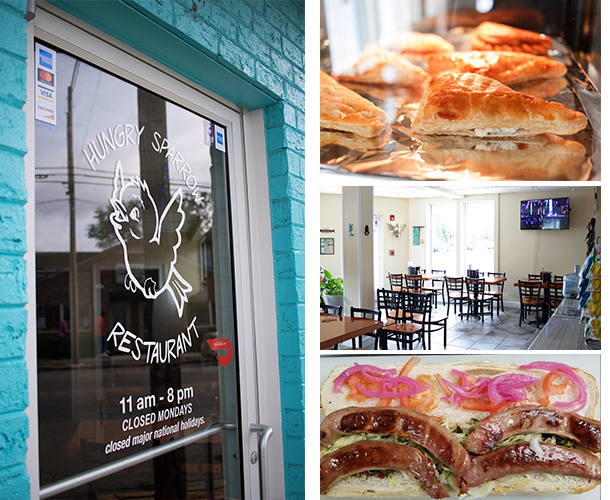 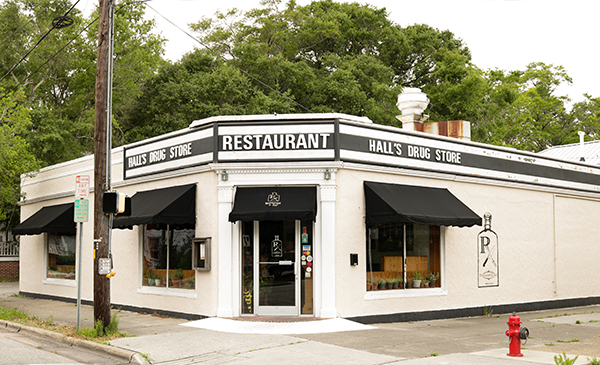 Nearly seven years ago, ingredient-driven Southern cuisine restaurant Rx brought dinner service to Castle Street. Located in the historic Hall’s Drug Store building, it features decorations of local art and furniture made with wood from an Eastern North Carolina tobacco barn. Their menu changes daily, but one thing is always on special: support for the local community.

“We are a warm, welcoming, community- focused restaurant and neighborhood hangout,” says Sarah Doss, Rx’s marketing and media representative. “Our food reflects the area’s seasons and all our coast has to offer.”

They source ingredients from farms as close as Brunswick and Duplin counties, such as Shelton Herb Farm and Humble Roots Farm. Every few months, a well-ordered seasonal dish stays on the menu for as long as it can be sourced, such as this summer’s fried green tomatoes, sprinkled with Chapel Hill Creamery Calvander cheese and drizzled in comeback sauce. 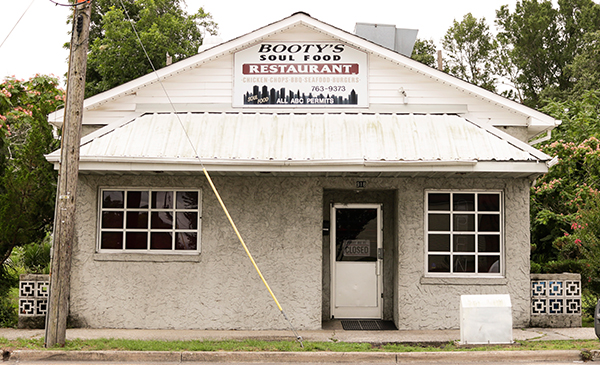 A little farther up the street sits the most hidden, yet perhaps the most celebrated, of all the Castle Street gems.

Lynwood “Booty” Davis has been serving up soul food classics since the 1980s in the small white building near Ninth Street. It’s quickly become clear to me that, in Wilmington, you can’t say “Booty’s” without also mentioning fried chicken. It’s been called the best in town by many, and the man at the fryer is as respected as his chicken is loved.

He’s got all the other great culinary glories of the Deep South on the menu, from crabcakes to rice and beans to mac and cheese. Booty’s deserves the power nap and patience you might need to get there, since it’s only open from 10 p.m. to 2 a.m. on Friday and Saturday.