Jill of all Trades

Out of reach? Not A La Mere’s Meredith West Owens and certainly not her custom designs

This simple truth became the cornerstone for A La Mere, a boutique design company owned by MEREDITH WEST OWENS and based in Wilmington. Specializing in paper and textiles, Owens uses personalized illustrations and surface designs to make every event – from weddings, to moving into new homes, to simply redefining one’s style – feel unique and special.

“Anything to celebrate the milestones,” she says, “whatever that happens to mean at the time.”

A North Carolina native, Owens got her start after spending her undergraduate years at North Carolina State University’s School of Design, where she first discovered patterns and textiles. After taking a year off after graduation in St. John, Owens was accepted into graduate school at N.C. State, and engaged in a sort of dual program with the College of Design and the College of Textiles.

The program, she says, took her back to the fundamentals of patterns and textile design and paved the way for her current business. But, it wasn’t until after she’d worked with House of Harris, designing patterns for the startup’s fabrics and wallpaper and then delving into items for her own wedding – including paper goods, table runners, the backdrop for the band’s stage, and even the pattern for the fabric of the bridesmaids’ dresses – that she was really ready to forge ahead on her own. 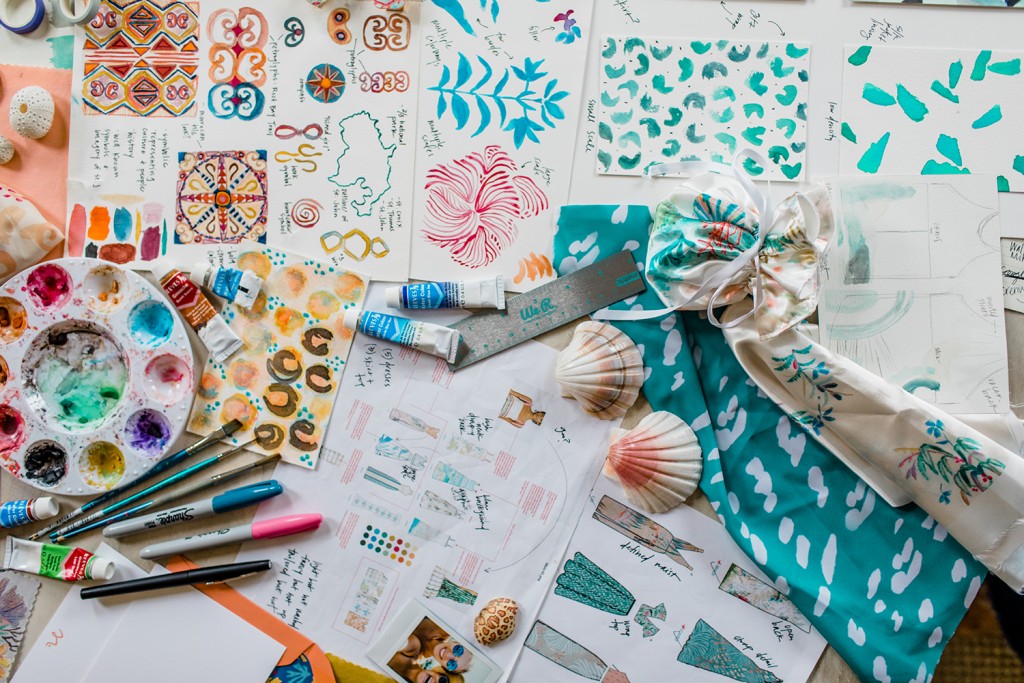 “The dresses were kind of a dream of mine,” she says. “But, it was one I wasn’t sure I’d ever be able to pull off until I actually sat down and did it, then found someone who was willing to put the actual dresses together.”

Since then, Owens has found herself immersed in the lucrative wedding business in and around Wilmington. Thanks to several of her friends’ weddings around 2017, her design work got plenty of attention from others, and business grew from there.

“It’s really fun to work with the bride, to take what they want it to look like as a whole and translate it into all the different pieces,” Owens says. “Everything needs to be cohesive, from the save the date to the wedding weekend items.”

But, A La Mere wasn’t founded just to cater to the sound of wedding bells. In fact, it’s really Owens’ love for working one-on-one with her clients that inspires her to take on all sorts of projects.

To that end, some of her most recent work has included anything from designs for a sarong and cover-up combo, upholstery, and even a few items for friends who are expecting new additions to their families in a few months.

“I’m a big fan of mockups. I mean, that’s why people hire designers,” she says. “You have an idea in your head, but you need someone who can take that and make the creative magic happen.”

One of the reasons Owens says she’s glad to be in Wilmington again is that, along with being closer to a key source of inspiration – the water and a coastal atmosphere – the entire creative community has welcomed her. Like the friends who initially helped her come up with the name for her business and spread the word to others who could use her services, local vendors and artists have pulled through and made A La Mere a success so far.

“It’s something I’ve always loved about Wilmington,” Owens says. “It’s not a dog-eat-dog situation at all. Everyone lifts each other up.”

And that, Owens says, has been a real help given the limitations during the COVID-19 outbreak and subsequent order to stay at home as much as possible. While many businesses found it difficult to keep afloat, hers was able to operate on an almost normal basis once it officially launched earlier in March.

Between emails containing digital representations of the patterns she creates and handy Zoom calls instead of face-to-face meetings, the main obstacles Owens has had to account for since launching her company revolve around details such as her clients needing to change the dates of their weddings.

“It will be nice to get back into a routine when all of this is over,” she says. “Digital tools make everything accessible, and I’m grateful to have them. But, I do miss the human connection, and I think this whole experience is going to help us realize how important that is.