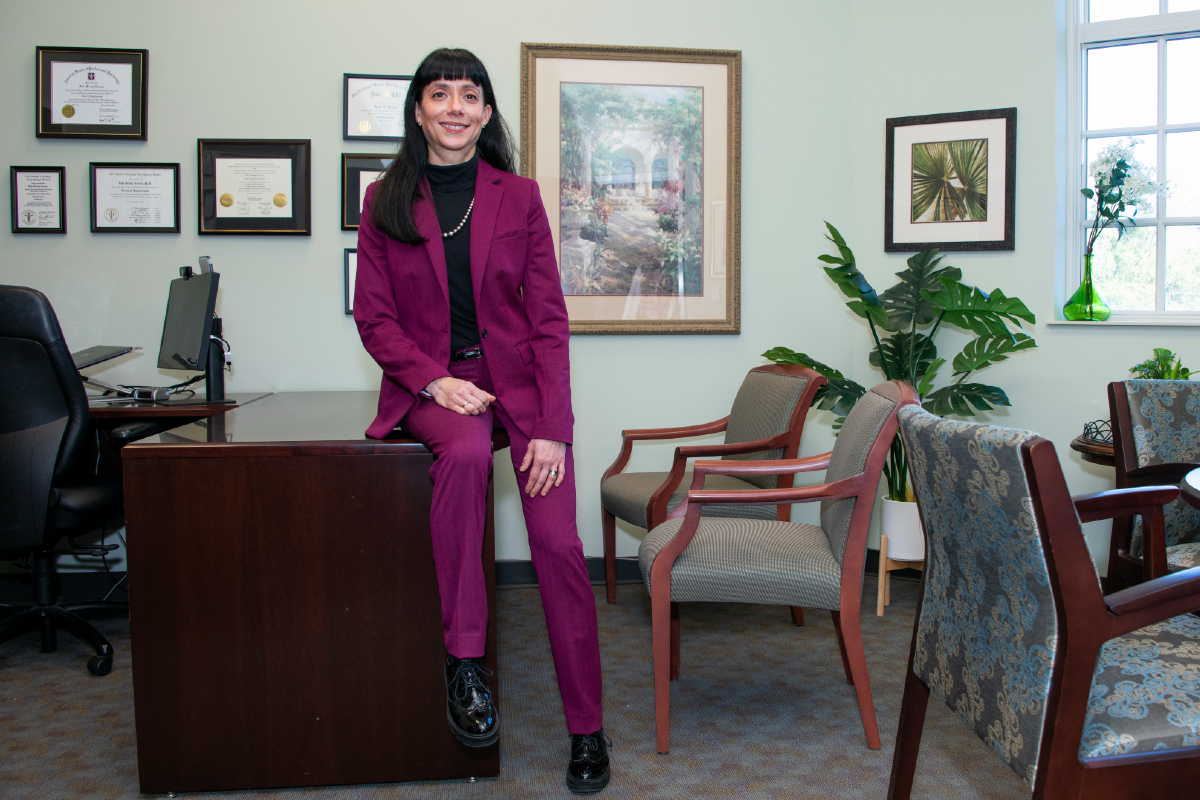 She uses neuroimaging, neuropsychology, and neurophysiology to understand the onset, course, and developmental implications of trauma and loneliness.

Nooner was born in Nashville, Tennessee, but grew up outside of New York City. “As a young girl, I always found myself helping other people. I was in the environmental club at school. We had an annual event called the Big Sweep down the main road in town and picked up trash and debris,” she says. Leadership, a secondary interest, started before high school as president of the symphonic band. She played the flute.

Nooner grew up in a family of health care professionals. Her father SAM BRODY is a retired physician and her mother JANE BRODY is a retired nurse. But it was her grandfather, CHARLES BRODY, who was a psychiatrist working with kids, who was her early inspiration. “I became particularly interested in mental health because it is an underserved area and there is a lot of stigma attached to it,” she says.

Nooner and her husband came to Wilmington for positions at the University of North Carolina Wilmington (UNCW) in 2012. “We were a unicorn type hire, a marine geophysicist and a clinical psychologist,” she says. The couple moved from northern New Jersey where she was a professor at Montclair State University. “It was nice to move to North Carolina and live at the beach where both of us work at the same place,” she says. Nooner holds a bachelor of arts degree in psychology from Wellesley College and a doctorate in clinical psychology from the University of California San Diego.

At UNCW, Nooner is chair of the department of psychology composed of thirty faculty and thirty staff plus part-time instructors who support about 1000 majors and 100 graduate students. She is also a professor in the department and runs the Trauma and Resilience Laboratory staffed by PhDs, masters, and undergraduate students. Nooner started the lab based on her personal interests as well as a university requirement for many faculty positions, including hers, to teach, research, and provide service.

“The research we do in the lab is focused on the contribution of childhood adversity to alcohol and other substance use problems. We are understanding factors in the brain to help kids become resilient to trauma-induced problems as they move from childhood to adolescence,” she adds.

Explaining the connection between trauma and resilience she says, “Trauma puts a person at risk for a host of mental and physical difficulties. And resilience, the opposite of risk, is functioning effectively in the face of adversity.”

The lab has three major research studies currently in progress. Funded by a Charles L. Cahill Grants at UNCW, this pilot study is observing what happens in the brain when college students who drink heavily stop drinking. “If the pilot is promising, we will apply for a larger grant,” says Nooner.

The second study, affiliated with Duke University, is investigating the impact of alcohol across development from preteen to 30s. It is a five-site study across the United States with over 800 participants and includes neuroimaging and neurocognitive testing to investigate the impacts of alcohol use.

Nooner’s third project, funded by the National Institute of Alcohol Abuse and Alcoholism, is examining brain-based markers of binge drinking in teens who have experienced adversity. So far, this study has found that calm yet alert brain activity is not as strong in maltreated adolescents. Mindfulness strategies aimed at strengthening this brain function might be useful for preventing teenage binge drinking. Nooner’s new study will continue this research with teens ages twelve to seventeen.

Fifteen students are working on these research projects in teams of one or two graduate student leaders with two to four undergraduate researchers. “Everyone get to be very hands-on,” Nooner says. Most are women whom she encourages through example.

“I do research not because I am good at it, but because I am passionate about it. 90% of my grant applications have been turned down. But I am still successful because of the 10% I received,” she states.

Nooner offers similar advice on leadership. “Don’t let anyone define you. Go on a path that you think is right for you,” she says.

Nooner is quick to recognize her journey is not one she has taken alone. “I came to UNCW with my husband. We are very much a team, a partnership. We have two kids, teen and preteen. My parents are part of our team. They have enabled us to thrive,” she says.

In ten years, Nooner wants to be president of a college, particularly a women’s college based on her powerful experience at Wellesley. And because research matters, she will always have her hands in one or two studies. “It’s what I am really passionate about and I will continue to do research along the way,” she concludes.