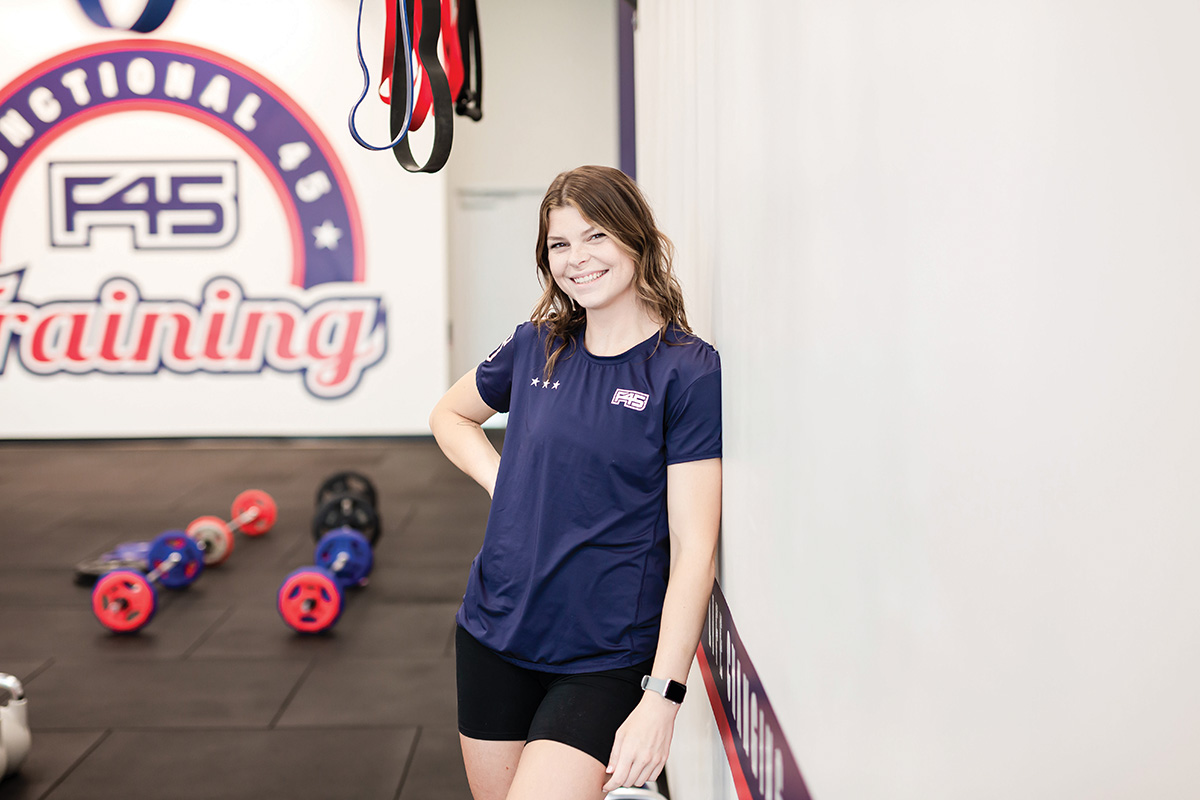 In September 2020, a new fitness facility opened its doors to the Mayfair area: F45. And now it’s expanding, opening its second location in midtown in May.

Standing for functional training that lasts 45 minutes, F45 is a mix of circuit and HIIT-style workouts that focus on mobility, strength, and endurance, just to name a few key components.

“F45 is a functional training facility,” HANNAH LEMING, general manager of the two local locations. “Functional training just means movements in everyday life. So, we work on mobility, stability, strength, power, and endurance. You name it, we do it.”

F45 workouts are preprogrammed, and all come from Gunnar Peterson, a Beverly Hills-based personal trainer, and a panel of other professionals. In addition to the TV that runs each workout for participants, personal trainers are there to give 1:1 attention.

“It’s a group training facility, but it’s personal trainers that work 1:1 with you,” Leming says. “So, it’s high energy but then that 1:1 attention. You also never do the same workout twice. You might have the same template because we work in four-week phases, but the workouts will always change. You never do the same one twice.”

Additionally, F45 takes a team training approach, meaning you work out with a group rather than by yourself. The facilities’ biggest focuses are to create a community and create a team, which means partner workouts are not uncommon during the 45 minutes of instruction.

“Their biggest standpoint is come in, train as a team, and get that community feel,” Leming says. “Performing around other people, when you work out with other people, you feel more motivated and confident. You’re having more fun, and you join arms with others that are just like you. So, F45’s big push as a franchise is to create a community and create a team.”

The response so far has been strong.

The Mayfaire location, 417 Arboretum Drive, has grown to almost 400 members, while the newly opened midtown F45 location, 3500 Oleander Drive in Independence Mall, has boasted about 150 members in just two months.

“You figure that’s 550 people that have joined,” Leming says. “I think we’ve been able to come into Wilmington and give them sometime new and different but also a safe place to work out with their friends, no matter if they’re twenty years old or sixty years old. It doesn’t matter.”

Leming and her F45 team have proven that they can train different ages and those in different walks of life. As she describes it, “we just made this tight-knit community and leveled it up even more.”

F45 is looking to expand to Raleigh and even has some locations popping up in Clearwater and St. Petersburg, Florida.

When it comes to Lemings’ approach for tackling each F45 workout that she coaches, she prefers to use the high-energy approach and make it the best 45 minutes of everyone’s day.

She understands that it might have been a hard day for some people. So, she counters them and goes in with the mindset that she can show participants that they can release all of that stress into energy put toward having fun and moving their bodies. In return, they can “go on about their day just feeling better and having a brighter day.”

“My approach is to just be fun and loud and happy and energetic,” Leming says. “When people are coming to class, I’m yelling at them from the door, getting them excited to come in. When I’m leading a class I bring excitement. I bring fun. I bring challenges. So, my approach to coaching every class is to make it memorable and for them to be like, ‘I can’t wait to come tomorrow,’ or leave with a smile on their face.”

When Leming signed up to be the franchise manager two-and-a-half years ago, she went in with the mindset to bring fun back to fitness. From her perspective, she felt as though some people felt movement and fitness were a chore.

“Our goal is to make people want to do it,” she says. “We want them to come in here every day. We want this to be their escape every day.”