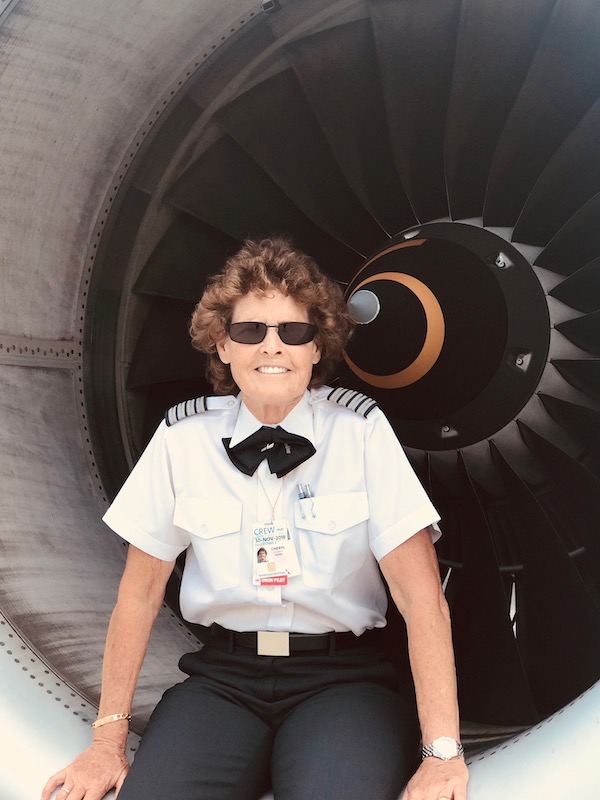 Her resumé doesn’t include the description “inspirational role model,” but CHERYL STEARNS has both soared to the top of male-dominated professions and sparked the imaginations of countless young people through her volunteer work.

Stearns has earned many accolades in her career as a military, commercial, and private pilot. She has also set records and won national championships as a skydiver. After she joined the U.S. Army in 1977, she became the first female member of the Golden Knights, the army’s elite parachuting team.

One of her fellow Golden Knights had a stepson, KENNETH WASLEY, whose father had been killed. She became friends with the boy, a friendship that has lasted for decades. More recently, Wasley engaged Stearns on a mission that is very close to his heart.

As the child of an army parachutist who died in a crash en route to a Golden Knights airshow in 1973, Wasley understands the grief of children of military or first-responder personnel. He has founded Children of Fallen Heroes, a Brunswick county nonprofit that helps those children and families cope with their trauma.

CFH offers a variety of activities to “get them out of the house, exercise their minds, and meet others who share a common bond,” Wasley says.

Starting with indoor skydiving and equestrian sports, CFH has since expanded its array of activities to include animal and wildlife rescue, golf, photography, and coastal fishing. In each case and at each location, the organization maximizes its impact by forging partnerships with groups that already offer these experiences.

CFH’s geographic scope has broadened as well. Its activities take place all over North Carolina, and its Honoring Heroes Tour will take the group’s message to audiences in Virginia, Florida, Georgia, Texas, Ohio, Illinois, and Wisconsin during 2022.

Building on that friendship that began when he was a boy and used to visit Stearns’ office in search of candy, Wasley has enlisted Stearns as an honorary adviser to the organization as well as an active participant.

“Ken Wasley contacted me a few years ago and asked if I would do a skydiving demonstration jump for Children of Fallen Heroes,” Stearns says. “That was the first time I had heard about it and thought it a great idea. I was happy to do the jump to help bring awareness to his new organization.”

Her involvement hasn’t stopped there. These days Stearns gets to know fallen heroes’ survivors in Wilmington and elsewhere by making skydiving demonstration jumps and acting as an ambassador for the program.

“I talk to dignitaries and people who come to see our jumps – anyone who might be interested in supporting the organization,” she says. Her volunteer work with CFH is in addition to her other professional endeavors.

“I retired (as a pilot) from American Airlines in July 2020. Since then, I’m an instructor for ground instructor and flight training for the Dash-8 for FlyRight in Concord (North Carolina), she says. “I have been involved with the Shelby Civil Air Patrol (CAP) as the Deputy Commander of Cadets since 2014. While being associated with CAP, I have taught several cadets how to fly. I continue to train and compete in national and international accuracy-landing parachute competitions.”

“This lady just doesn’t stop,” Wasley says of Stearns. “She’s done over 20,000 jumps, hitting something as small as a dime from an average of more than 10,000 feet. To see a woman up there: I am very proud of women in uniform, and she was the first woman on the U.S. Army (skydiving) team. She inspires me by her dedication to the mission; to whatever she puts her heart into. She strives for perfection. That’s inspiring.”

The work of CFH, in turn, has inspired Stearns.

“I would like Children of Fallen Heroes to grow, so they can provide more opportunities for the children,” she says. “I’d like to see them gain more public awareness, which could lead to more sponsors and donations to help build the programs and their first camp in North Carolina.”