Ruth Jenkins of Our Heroes Inc. shares her love for horses, life journey

RUTH JENKINS always loved horses. She rode as a child growing up in Southport. It wasn’t always an easy life though. One of six children, her father died when she was 13. Her mother died the year she graduated from high school.

Horses have always been a refuge and remain a big part of her life today.

In 2013, Jenkins and her husband Phillip turned the farmland they purchased in Bolivia, North Carolina into Horseplay Farms and founded Our Heroes Inc., a nonprofit organization providing equine-assisted activities and therapies to the vast special needs populations within the local community.

The organization caters to children and their families as well as adults who face emotional, physical, and mental health challenges; veterans from all service branches and wounded warriors; disadvantaged and at-risk youth; and those with special needs and their families.

“It’s all about giving back,” Jenkins says. “To see the children and adults who have so many special challenges thrive through the healing power of horses makes it all worthwhile.”

It is the sum total of Jenkins’s experiences that have shaped her enduring desire to help others.

As a young, newly graduated junior account, Jenkins found her first professional mentor when she was hired to set up a multi-million dollar corporation. It was less than a year of working side-by-side, when her mentor and three other members of the corporate team were killed when the plane they had just purchased crashed.

“While living in Germany with my husband who was in the army, I experienced the reunification of Germany, the wall coming down. During the Gulf War, I saw my daughter’s school surrounded by armed soldiers guarding against terrorism. I watched my friends and coworkers being deployed,” she recalls.

And Jenkins continued to ride horses. 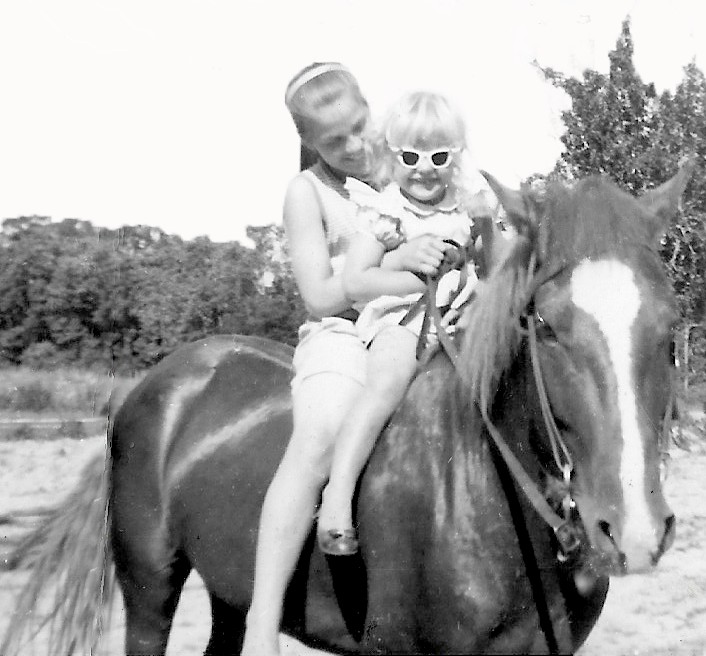 Ruth Jenkins pictured with her sister

In 1991, as an Army civilian, she was selected to attend the Defense Comptrollership/MBA Program, a cooperative endeavor between Syracuse University in New York and the Department of Defense.

She returned to the United States with her daughter, leaving two horses under her husband’s care while he remained on active duty. After graduation in 1992, Jenkins, her husband, daughter, her cats and her rabbit, moved to Fairfax, Virginia. Here, she continued her career with the U.S. Army Corps of Engineers Headquarters, and then later the Office of the Assistant Secretary of the Army, Installations, Logistics and Environment.

On the morning of 9/11, she happened to be out of the Pentagon at a meeting a couple of miles away. “I lost eight close friends in the attack, two who were classmates at Syracuse.”

In 2007, Jenkins retired from the Department of the Army and became a senior vice president for a defense contractor, followed by lead associate for Booz Allen Hamilton and then started her own consulting business.

Today Jenkins and her husband, a Vietnam veteran, spend their time at Our Heroes, Inc.

“My husband, not really a horse person, works tirelessly and is frequently choked up by the impact of the horses,” she says.

“He came up with the name. He initially discounted it because he felt that it only applied to the military. But I thought about it and said no! Anyone who battles special challenges and chooses to struggle is a hero. And Our Heroes, Inc. was born,” she added.

Jenkins says the accolades for Our Heroes, Inc. are numerous.

“Parents and grandparents say that this is the first time they have seen their child smile, interact with other kids and just be a kid,” she says. “Adults talk about how horses are therapy. Calming, understanding, not judgmental, and excellent listeners.”

Visit ourheroesinc.org to learn more about the programs, volunteering and ongoing needs.