Betsy Suman on leading the Assistance League of Greater Wilmington 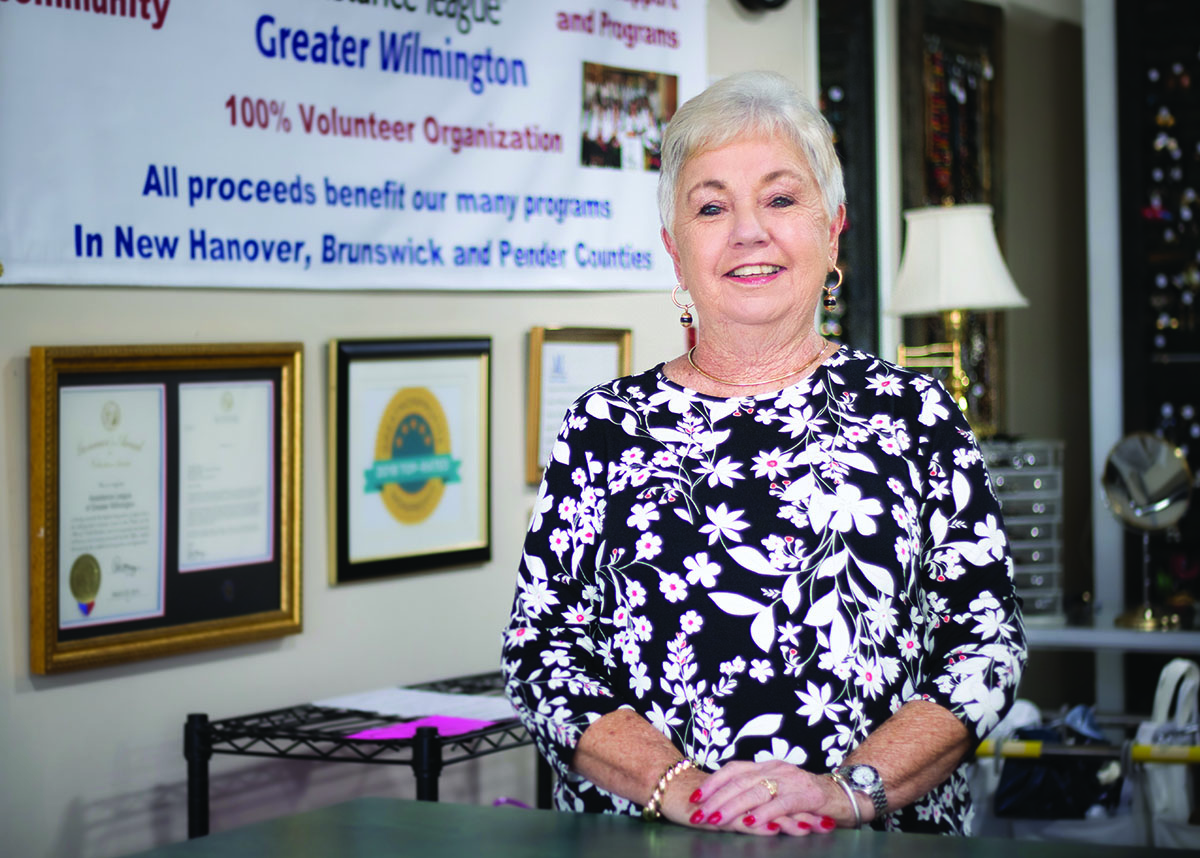 As president of the Assistance League of Greater Wilmington nonprofit, BETSY SUMAN directs the volunteer efforts of 145 members dedicated to helping children and seniors in New Hanover, Pender, and Brunswick counties.

Born in Massachusetts and educated as a nurse, Suman followed her husband’s job to Raleigh in 1970 where she worked at Wake Medical Center. With retirement, she moved to Wilmington and the beach in 1995. The family had made frequent visits to the beach while living inland, at one point even owning a condo at Wrightsville Beach.

By 2009, when she was introduced to the Assistance League of Greater Wilmington (ALGW) through a card party fundraiser, she felt the need to give back.

“I found this was a good way to volunteer,” she says.

One of 120 chapters across the country, Assistance League of Greater Wilmington started locally in 2008. There are also chapters in Raleigh and Charlotte. Nationally, the majority of chapters are in California where it was founded, primarily by old-time movie stars to assist in the aftermath of a natural disaster.

“It was founded one hundred years ago to help with the San Francisco earthquake, and it grew from there,” Suman explains.

“We give all our money back to the local community,” Suman says. “Since inception, we have returned to the community, which is three counties, more than $1 million.”

In her second year as president of ALGW’s all-volunteer organization, Suman isn’t just an administrator, she’s a tireless volunteer. The organization supports a multitude of programs and stages several fundraisers to help with the funding.

“We have a puppet program called Kids on the Block for elementary schools. I’m a volunteer for that,” she says, adding that the program, which uses 3-foot-high puppets, focuses on bullying, disabilities, interactions with medical personnel, and more.

The group supports the SECU Family House at New Hanover Regional Medical Center for families of those who are hospitalized long term by providing meals and other needs.

Through the twenty-three elementary schools in three counties, the group supports Operation School Bell with new clothing, books, hygiene items, and book bags. Teachers can apply for grants up to $1,000 through the Links to Learning Program.

“They tell us what they want to do and how much money they need,” Suman says. “We read over all the paperwork and decide if it’s something we can do.”

The money is awarded in November, and teachers must report the outcome to ALGW by May. In many cases, Suman says, the teachers would have had to pay for the project personally, or it wouldn’t happen.

“It’s a wonder program,” Suman says. “They have reported a couple of times that a person who workers say hasn’t spoken for a year will suddenly start singing along.”

They also provide a holiday dinner for Grandparents Raising Grandchildren.

Suman reports that some of the funding they normally give to elementary schools wasn’t needed due to the generosity of many people and groups across the country who came to the region’s aid last fall and winter. So, the money was redirected to the colleges.

“Last year, so many organizations that never help them helped the schools, so it changed what we gave. One school said we had so many groups give us clothes we want you to give to a different school,” she says.

“We have our hand in a lot of things. We stay pretty busy,” Suman adds.

Suman, like most other members, serves a rotation in the group’s thrift store on Eastwood Road, where sales raise money for the group’s philanthropic efforts.

“The front of the store needs five workers every day, and then we have the back room where we store donations and price them,” she says.

Clothes are steamed before reaching the sales floor. A display team does all the merchandise setup and rotation each Monday, she says. Merchandise must be on the floor for at least two days before a member is allowed to purchase it.

“It takes most of the membership to do this,” Suman says.

Without the store, which opened in 2014, Suman says the organization could not accomplish all it does. After paying rent and expenses, they’re still able to do “quite well,” she says. “We had somebody tell us our thrift store was the Tiffany of thrift stores.”

All of the chapter’s members are women, although a few husbands pop in and out to assist when needed.

“The membership vice president will get in touch with them and set up orientation,” Suman says, adding that dues are $75 per year for voting members and $100 for nonvoting. There are no minimum time commitments or set requirements. Often, she says, nonvoting members want to help financially but can’t commit the time.

“We prefer you work in the thrift store a couple of times a week, and on another program, but it’s not required,” she says.

The group stages several fundraisers each year, including Bags and Bling which begins October 15 and runs for a week at the thrift shop, 420 Eastwood Road, Unit 107. Designer (and possibly designer) handbags are put aside all year for the sale. There are also specialty jewelry items and holiday-wear clothing.

“Our customers look for this every year. We save the bags all year; we set them aside so we have a good supply for this sale,” Suman says. “We can’t guarantee they’re not counterfeit, but most are really good bags.”