The Port City is in no shortage of the summertime treat, with several local spots recently expanding their offerings to get through the dog days of summer.

When it comes to sweets, KRISTEN SPETRINO (above), owner of Coastal Cupcakes and Topsee Tulip Frosting, knows a thing or two about creating tempting flavor combinations.

“Moving into ice cream is a great fit for us because we’re able to utilize the same natural, high-quality ingredients, which we have on hand already for our cupcakes and frostings,” Spetrino says.

Spetrino insists that the only way to create the best flavor in ice cream or any product is by starting with the best possible ingredients.

“Ice cream that is handmade with high-quality ingredients is night and day compared to most of what you can buy in the grocery store,” she says.

Spetrino says ice cream lovers are looking for fun and funky flavor combinations, which is something that small-batch producers such as herself can experiment with. Right now she’s perfecting oatmeal cream pie and banana pudding.

“Lots of people are looking for both great flavor combinations and texture in their ice cream, and both of these provide that,” Spetrino says.

Coastal Cupcakes may eventually sell ice cream by the pint or half-gallon, but for now Spetrino says she is focused on creating custom flavors for area restaurants. 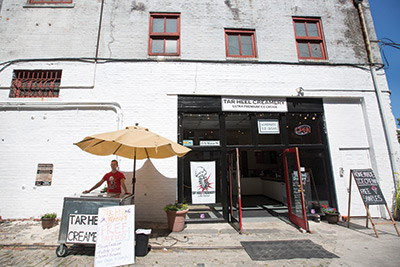 “It’s great to be able to work with local restaurants to develop flavors that are unique to their menu,” Spetrino says. “It’s a chance for them to offer their customers something they can’t find everywhere.”

If you’ve stopped into KILWIN'S in downtown Wilmington for ice cream lately, you’ve seen that it has nearly doubled, having expanded into the neighboring space previously occupied by Dang! Southern Chic boutique.

The company recently created its own marshmallow recipe and has a number of new marshmallow products on the shelves. They’re calling summer 2015 “A Marsh-Mallow Summer,” and also featuring two limited edition ice cream flavors: marshmallow s’mores and heavenly hash.

“We’ve seen a lot of surprised faces walking through the doors so far this season,” McGaskill says. “People are amazed at how much more space there is. It really allows our customers to better see all that we have to offer.”

Ultra-premium ice cream, which has a lower amount of aeration and higher fat content than regular ice cream, results in a richer, creamier product, purveyors say.

Owners TONY SCHWARTZ and MICHAEL FINK partnered with former Wilmington mayor HARPER PETERSON last year when Peterson was seeking tenants for the lower level of 15 South Water Street. They operate the Wilmington store as well as two ice cream trucks that travel throughout eastern North Carolina. Schwartz says they are also working on the addition of another truck that will allow them to expand their presence at events statewide.

So in honor of National Ice Cream Month, do your part and indulge in the sweet taste of summer.

“It’s great to be able to work with local restaurants to develop flavors that are unique to their menu. It’s a chance for them to offer their customers something they can’t find everywhere.” – Kristen Spetrino