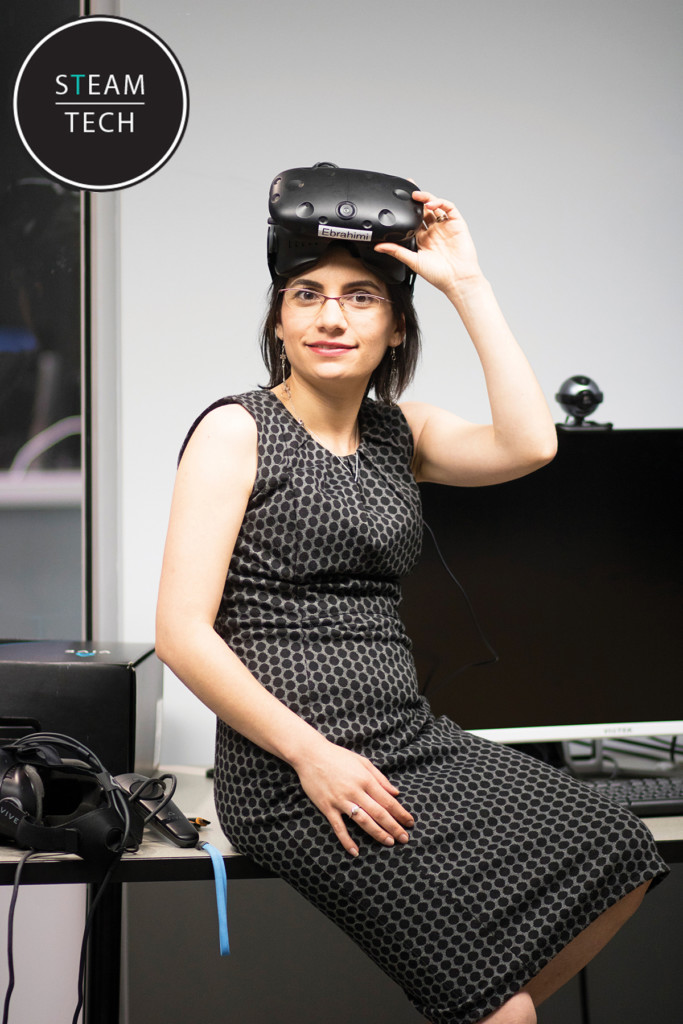 Elham Ebrahimi moved to the U.S. from Iran in 2011 seeking adventure. What she has found could lead to brave new worlds for many others.

After earning her Ph.D. in human-centered computing from Clemson University in 2017, she joined the faculty of University of North Carolina Wilmington where her expertise, including degrees in robotic engineering and mechatronics, have allowed her to team with other professors to find ways “to use technology for good,” she says.

“I’ve always been passionate about doing something for people that can connect them and is tangible. I can change people’s lives for the better,” she says.

After spending a year exploring virtual reality (VR), she decided that was where she would focus her energies.

Dr. E, as her students call her, is working on two projects with New Hanover Regional Medical Center.

The first uses VR to assist individuals with cognitive deficits to reintegrate when moving from the hospital back to their home. The patients may have brain injuries, neurological trauma, stroke, tumors, multiple sclerosis, Parkinson’s disease, or other disorders that cause cognitive impairment whether by accident or disease, Ebrahimi says.

“The goal is to increase participation in the community, which could impact the person’s employability,” she says.

Through a virtual reality grocery store, a patient can practice shopping with a therapist to find a list of objects, put them into the cart, and complete the check-out process.

“It’s one small piece of the project,” Ebrahimi says, adding that it is geared for patients age twelve and up.

The second project is for pain distraction in children ages five to seventeen who are about to undergo surgery. Using augmented reality to create a distraction, the process educates the patient and can lead to easier recovery. The patient creates a creature that he or she must feed and nurture while waiting for surgery and again when they come back from the recovery room to their hospital room.

The project also includes teaching the children about the medical issue they are facing and how the doctors treat it. The goal, Ebrahimi says, is to make the hospital stay more fun, less scary.

“No one likes being in the hospital even a few days,” she says. “We work in consultation with and through permission of the guardians to introduce the children to some of the facts about what they’re going through.”

National Science Foundation funding also is allowing a team that includes Dr. E to introduce students to STEM occupations through virtual reality. “We focus on grades three to five; we can make momentum at that level to prepare students for a STEM opportunity in middle and high school.”

In the VR exercise, students enter the world of a park ranger, mathematician, scientist, or other STEM occupation.

Employing a game-like environment, the students pick an occupation, say park ranger. “Someone calls and tells them about a turtle nest,” she explains. “They select equipment, go to the site, set up a perimeter, determine the type of turtle, examine the nest, and get a sample from an egg. They go through all the stuff a park ranger does.”

After that, students practice other scenarios to learn about the job, and the same for other occupations, Ebrahimi says.

“One of the important things is that this environment removes all the barriers like lack of resources, poverty, or lack of support to reach underserved students. It opens the door for them to practice opportunities for STEM careers and to learn about them,” Ebrahimi says.

She’s also working on a project for juvenile offenders, ages twelve to seventeen, to teach moral behavior in society. Using a grocery store similar to the one in the hospital project, the young people take on the job of a cashier, learning to count money and similar tasks while also facing critical moral questions such as whether they would sell alcohol to their underage friends.