Fight to Get Fit

There are countless ways to get exercise in the area. There’s a landscape that allows for walks and runs on the beach, but many residents of Wilmington want more out of their exercise routines. That desire for more has led them to the doors of Confidence Martial Arts where chief Krav Maga instructor Matthew Hemker teaches the proper technique of the hybrid martial art.

“You fight to get fit … This training is designed for anyone from any walk of life,” he says. “Krav Maga is built on the premise that size and strength are not the only way to win a fight, but rather, a well-trained person with the right knowledge can affect a defense and keep themself and their family safe.”

“It comes from Israel and was created to be the military combatives program for the Israeli Defense Forces,” he says.

It draws on techniques from a combination of disciplines including karate, boxing, kung fu and judo, Hemker says.

“Krav Maga is principle based,” he says. “It focuses on eliminating the immediate danger of a situation, violently counterattacking the ones trying to do us harm, and getting out of the situation by getting free. To do this, we teach concepts such as simultaneous offense and defense, the harnessing of anger and fear by turning them into aggression, and using whatever works in the scenario to allow us to go home safe.”

Lichtenfeld, who was a boxer and wrestler while growing up in Slovakia and fought antisemetic street gangs during the 1930s, moved to Israel after World War II and eventually became chief instructor of self-defense and fitness for the Israeli military.

“There he was able to put to use all he had learned and trained. Over his years of service in the IDF (Israeli Defense Forces), Lichtenfeld continued to improve and refine the system he created,” Hemker says.

The result was a martial art form that could effectively train a fighting force in a short period of time.

“It is continuously evolving and improving so that it addresses new threats in the most practical way,” Hemker says. “Over the years, it has gone from being solely military training into being used for civilian and law enforcement applications.” 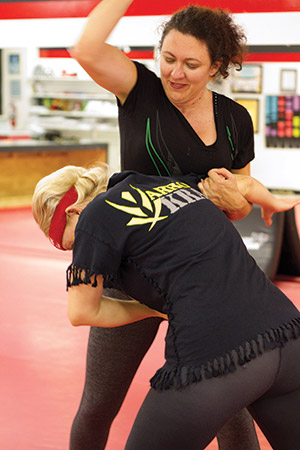 Krav Maga is not a ring sport, but rather, a problem-solving process for violent encounters, he says, adding that it emphasizes threat neutralization, simultaneous defensive, and offensive maneuvers and aggression.

“I decided this was the right training for me to focus on because of its real-world applicability,” he says. “I find that it is the most efficient way to train people to be functionally safe in the shortest amount of time.”

“Additionally, we have a Kali-based class that works with principles that are complementary to the Krav Maga program. In that class, we teach the students how to work with defense against and employment of knives, sticks, and empty hands.”

Krav Maga, Hemker says, is based on natural body reactions.

“By building off of what our instinctual responses are to a violent encounter, we can create people who are capable of defending themselves because the techniques are easy to remember and easy to execute,” he says.

The instructors offer levels of training for everyone, regardless of previous training or current state of fitness.

“The students love the training,” Hemker says. “We have several dedicated students that come to every class and every seminar we have. They find the training to be informative and useful.”

The classes are structured to provide self-defense knowledge as well as great workout to be beneficial on multiple levels, Hemker says.

Hemker points out that also any background can work for those who want to train in Krav Maga.

“You don’t have to be a karate black belt or a champion wrestler to be good at Krav Maga,” he says. “By training in Krav Maga, one can learn how to handle stressful, violent situations. Training is done in a constructive and beneficial way, so you have the training should you ever need it.”