Fanning the Flames of Creativity

Three fierce full-time artists bring the heat to their craft 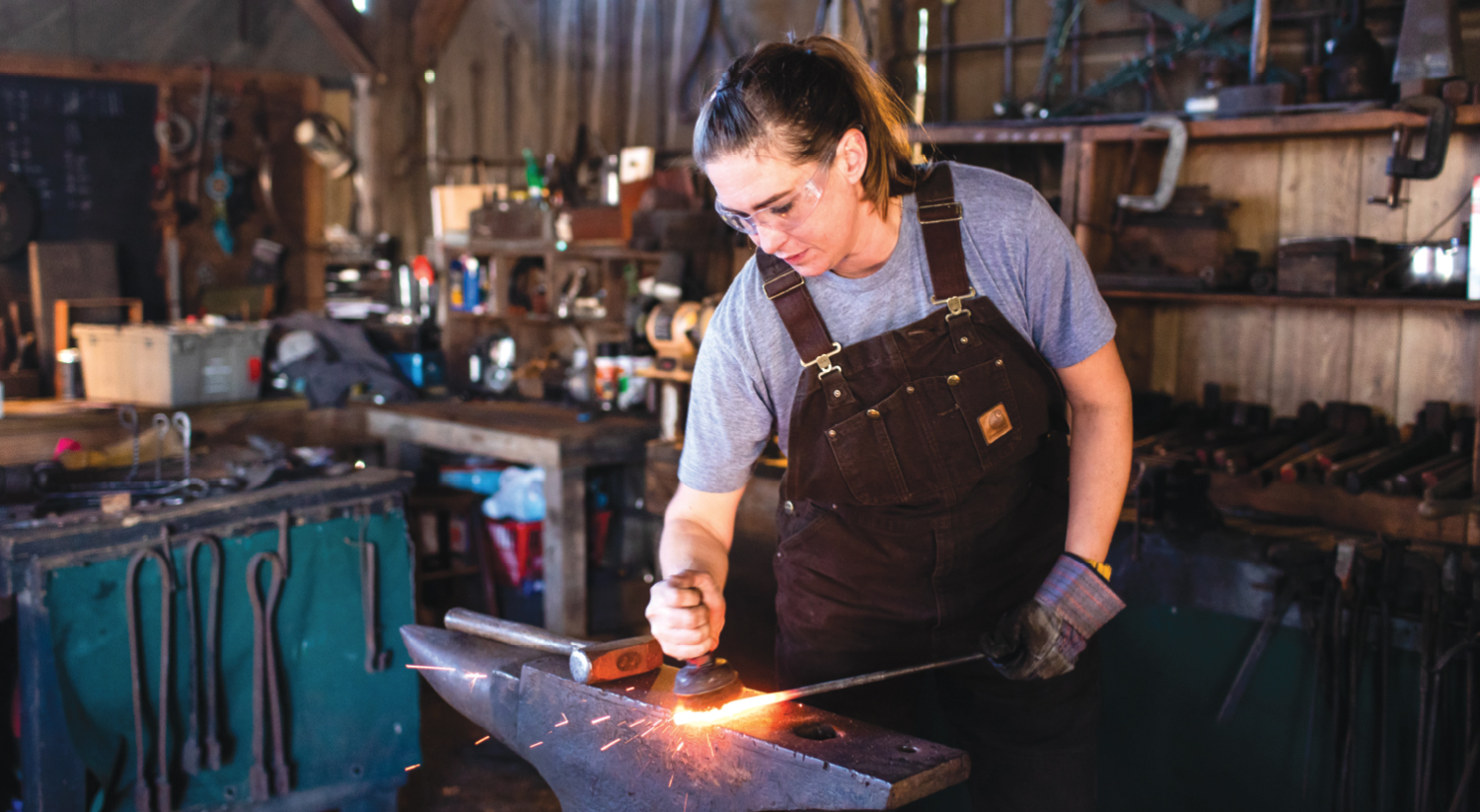 Three fierce full-time artists bring the heat to their craft – not just in passion and perseverance, but at very hot, sometimes flaming, temperatures.

Despite the saying, playing with fire has inspired continuous success and growth for all three women, with the exception of a minor burn or two.

Across their different materials – metal, clay, and wood – these creators express great love for the mechanical processes that drive them. 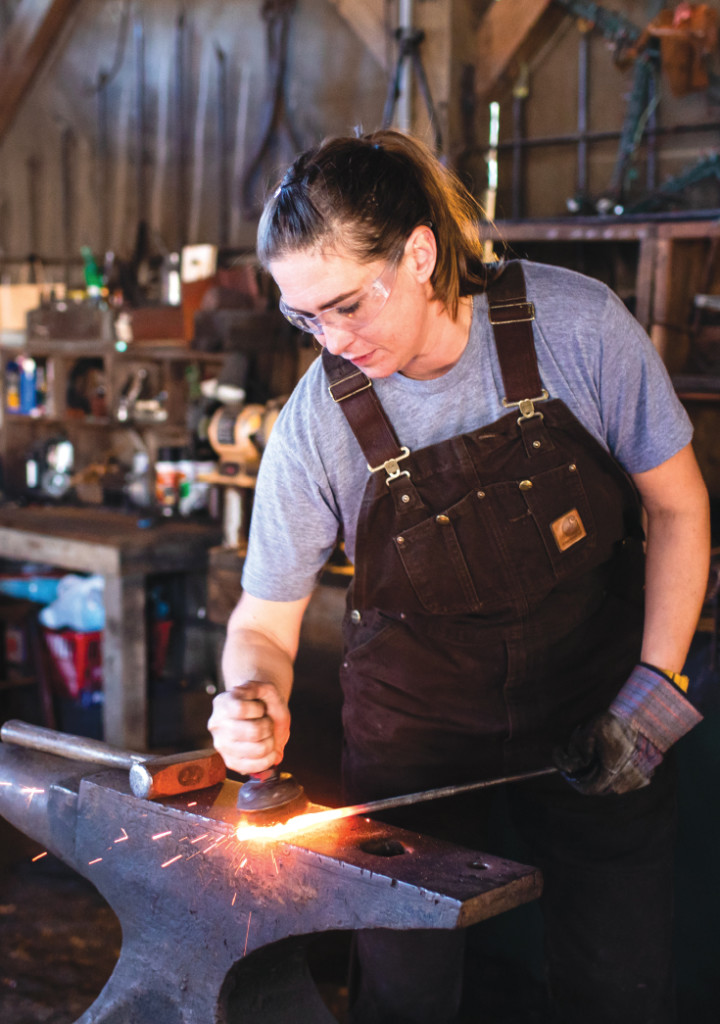 AUTUMN DAY has been teaching herself the skills of blacksmithing for eighteen years and counting. A college elective became a hobby until her hobby became a career. In 2016, she became the resident blacksmith at Poplar Grove Plantation, where she works in a studio reminiscent of industrial revolution days. Dark with soot, the room is lit by the crackling coal fire, as the Civil War-era reproduction of a bellows gives it air. Occasionally, sparks fly when the hammer hits iron.

“A lot of people work with gas because it’s cleaner; it’s more predictable,” Day says, “but, I definitely love playing with fire. I like the intimacy of the coal and bellows … The fire is very meditative for me, and I enjoy the range of colors.”

As one of the few blacksmiths working on the Southeast coast, Day never had a chance to apprentice. The Poplar Grove studio allows her to experiment. In between new projects, she regularly creates candle holders, hooks, sage bundle holders, and more, some of which are for sale at Poplar Grove’s gift shop, at her studio during festivals, and, most recently, at Madame Meerkat’s Cabinet of Curiosities. 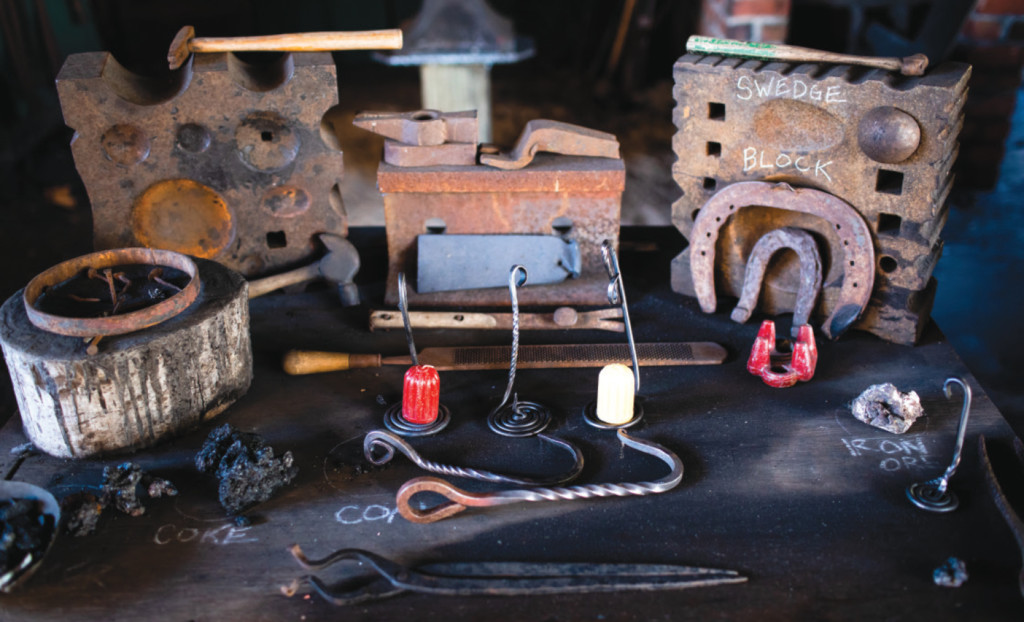 She’s gotten so good at teaching herself that she began teaching others, too. Through Poplar Grove, she hosts a fourhour workshop. Students learn the basics of the craft and leave with a creation of their own.

More details and sign-up information are available at poplargrove.org/discover/blacksmith-workshop. 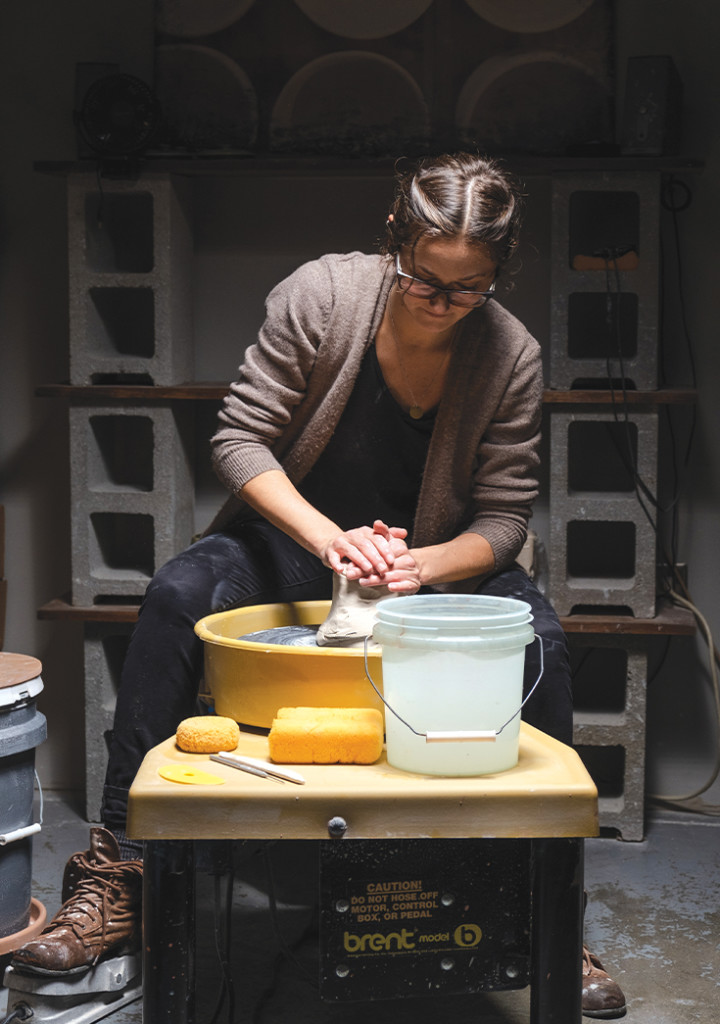 LAUREN ROGERS’ pottery journey began with a college elective that redirected her attention from 2D photography to 3D creations.

“I found a sense of community in clay,” Rogers explains. “I didn’t know when I was going to find an opportunity to pursue something like that again.”

Today, she holds space at theArtWorks, serves as the pottery coordinator at Leland Cultural Arts Center, and teaches a weekly pottery class at Pineapple Studios on Front Street.

Somewhere in between, she throws and fires clay into functional ceramic pieces to be sold at local markets or at venues such as Port City Pottery & Fine Crafts in The Cotton Exchange. She lists her upcoming shows on her website at laurenrogersceramics.us.

Her artwork often comes in the forms of dishes, vases, and other household items, featuring oceaninspired, fluid colors, and asymmetrical designs.

“I love the act of creating these pieces,” she says. “I really enjoy the act of making it – the repetitiveness. I love those processes – the quiet hum of the wheel.” 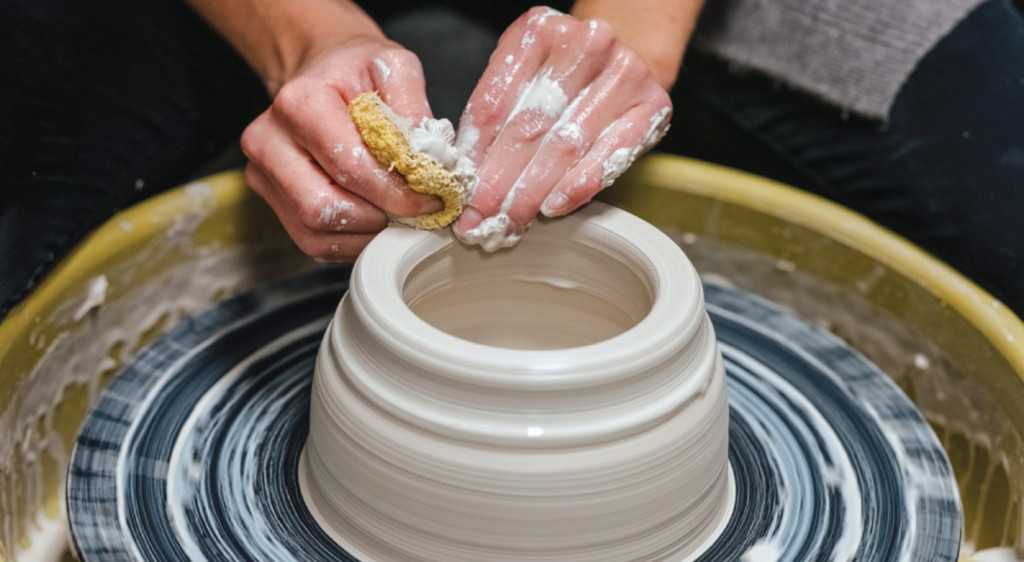 Today, Rogers mainly uses an electric kiln for her personal work but loved learning and growing with gas kilns in the past. As a final stage of the process, the sometimes unpredictable heat element forces many trials and errors for new potters.

“It’s very empowering being in control of a large piece of equipment,” she shares. “When I was firing a gas kiln, it felt good to know I made that, with that big machine.” 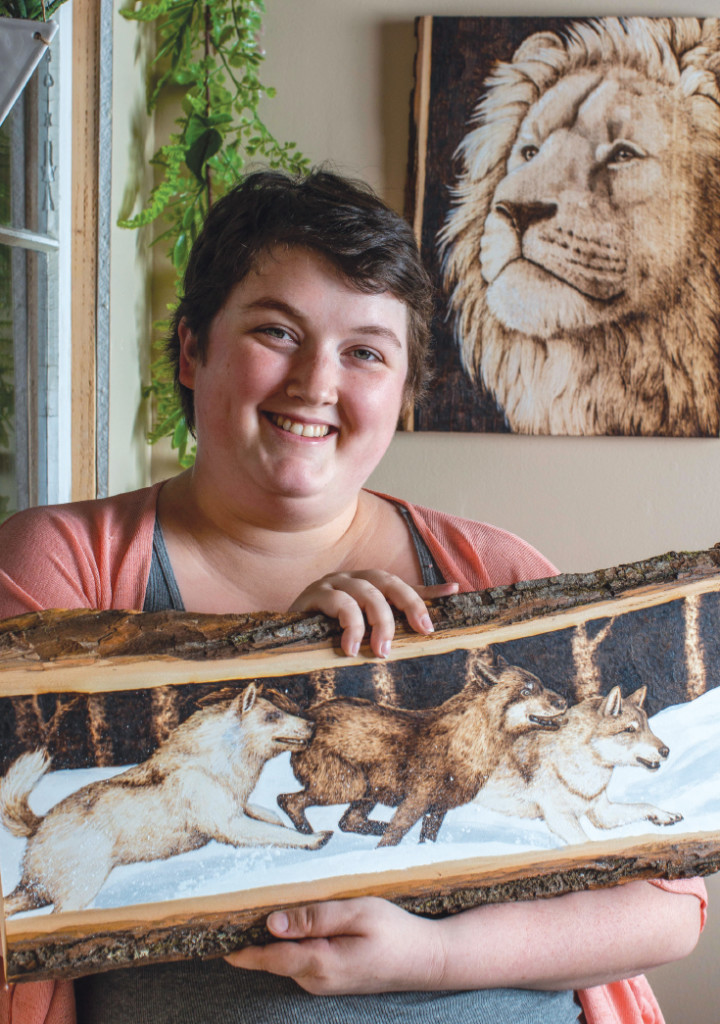 LAURA KALINA’s woodburning business took off when, ironically, she moved closer to the water.

After growing up in northern Virginia, Kalina left her life as a competitive D.C. photographer to follow her retiree parents to Wilmington. Since then, the unusual woodburning medium has been the focus of her art, operating under the studio name Mossy Fox.

“Woodburning has been kind of my alternative to just drawing,” Kalina says. “I tell people it’s like drawing with heat … Sometimes, when I’m burning, a little flame will pop up for deep burns.”

Kalina has always been most inspired to illustrate one thing: animals. From pets to wildlife, they’re her favorite subjects. “The one subject I won’t woodburn is people,” she says with a laugh. Kalina has illustrated native wildlife such as black bears, elk, and wolves, but her most popular subject is inspired by her love of Wilmington: sea turtles. 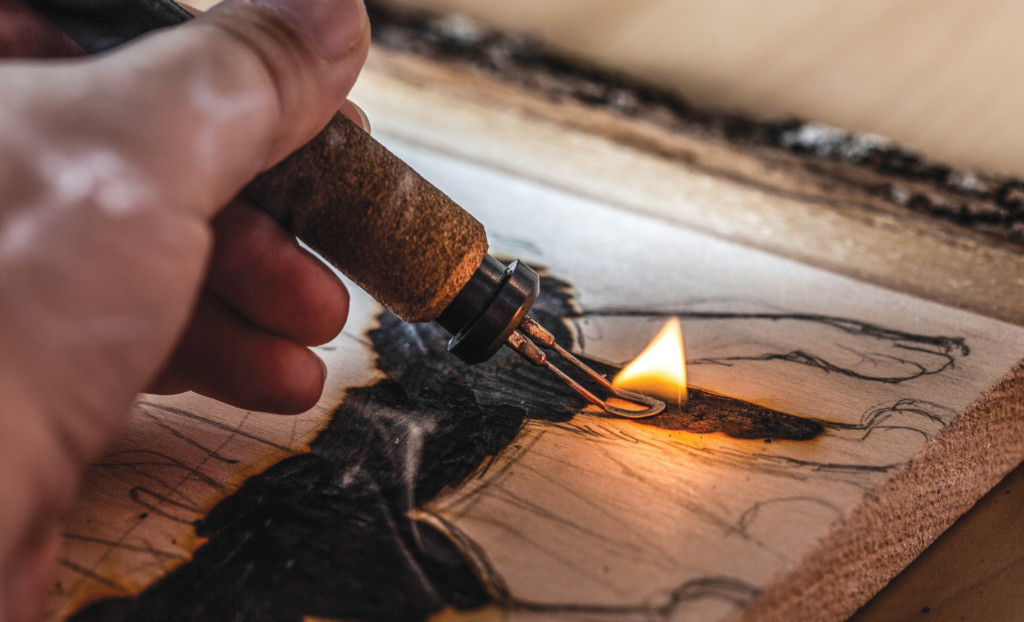 “Moving down here was one of the best decisions for me as an artist,” she explains. “Everyone in Wilmington, not just artists, has been so unbelievably welcoming.”

Mossy Fox Studios can be found at Kalina’s space at theArtWorks, at events, such as last month’s The Holiday Flea at BAC or the Orange Street ArtsFest, and at mossyfoxstudio.com.