Inside the home of Dave and Kathy Spetrino

“We’ve evolved more toward something that’s got more of a transitional feel,” Dave Spetrino, president and CEO of Plantation Building Corp, says about his company’s work. Though not minimalist, the projects typically have the crisp, clean look popular with clients.

Signature elements in both client projects and his home:

Having a cohesive color palette is an area both clients and the couple use in their home styles. People have gotten more comfortable with complementary colors throughout the house, Dave says, turning to tone-on-tone transitions rather than different, high-contrast shades in each room.

In 2006, the Spetrinos started building their Church Street house. They wanted a home that would blend in with the character of the historic district but also be new. It had taken a couple years just to go through the approvals to build the house on what had been a parking lot. 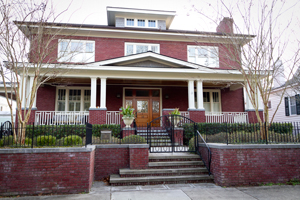 The process included an archeological dig, which turned up a cistern that was part of a former house built during the early part of the 20th century as well as more than 1,500 items – mostly bits of glass bottles and pottery.

Many items were donated to groups. But a fish-shaped glass bottle stayed behind to be displayed at the home, Kathy says.

The Spetrinos designed their kitchen, as well as the rest of the house, with flow in mind.

“There’s no dead ends in our house,” says Dave, who points out the family can walk through the kitchen to the butler pantry to the library with the layout.

One issue that came up, however, was the lack of cabinet space. Both to keep the room open and to accommodate large windows, the couple cut down on kitchen cabinets but made up for the space with a butler’s pantry.

The kitchen includes a marble-topped island, vintage farm sink reproduction, double oven, and even a second dishwasher in the pantry. 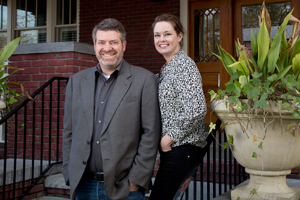 But for all the high-end details, Kathy’s must have and favorite item in the kitchen is an ice maker – an under cabinet addition that churns out ice for the kids’ cups, stocking coolers, or filling drinks when entertaining.

It’s a little touch of convenience that helps make their house a functioning home.