Bolstered by a major gift, communities in schools continues to grow 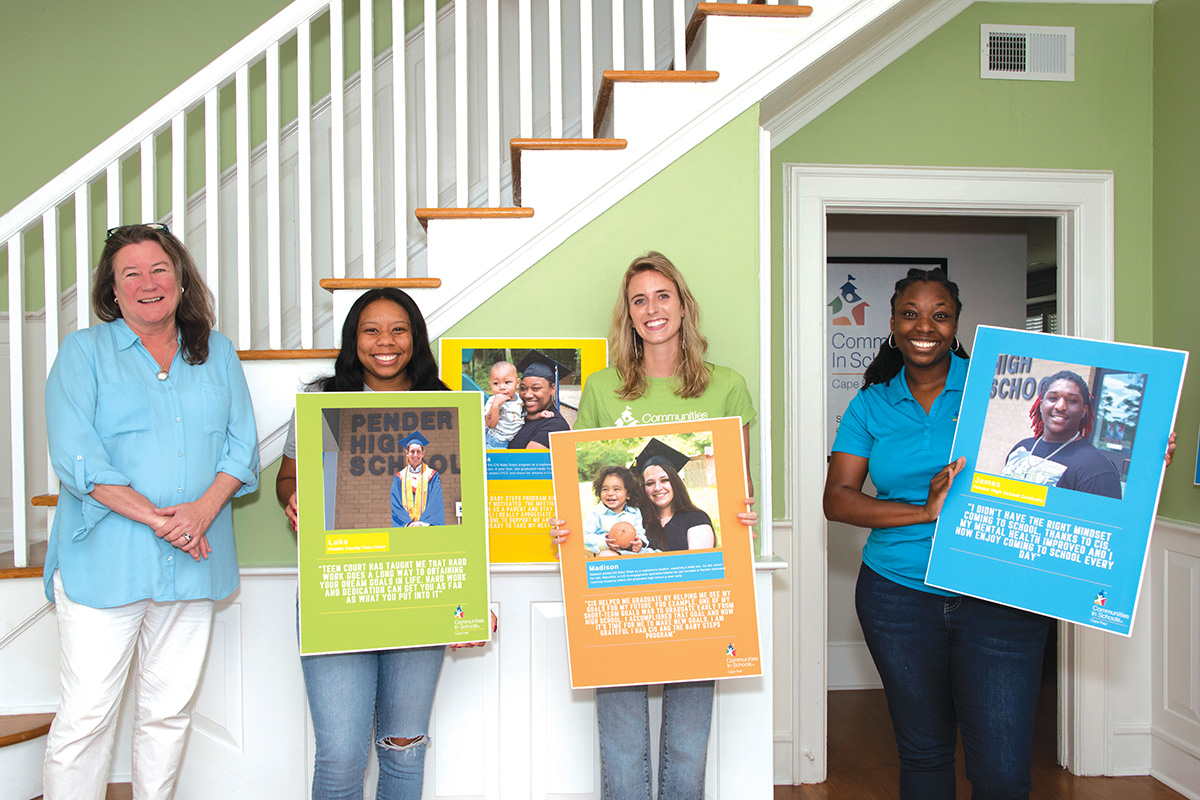 The local Communities in Schools group is expanding, with a new headquarters and a larger net of students to help in the area.

The larger mission is fueled by a notable gift this year but also by the nonprofit’s continued growth in services.

Communities in Schools (CIS) of Cape Fear focuses on dropout prevention through community-based programming. It got its start back in the ’90s as a program run through the chamber, then became its own independent nonprofit in 2005.

CIS of Cape Fear is a program that works “directly inside public schools, supporting vulnerable students and those with the greatest risk of dropping out,” officials say.

This fall, CIS of Cape Fear moved into a larger headquarters space at 1209 Market Street and now has seventy staff members.

The nonprofit is actively involved in the schools, connecting students and their families to critical resources, such as food, housing, health care, counseling, and remote learning technology. The group partners with public schools and community agencies in New Hanover, Pender, and Duplin counties and serves twenty-seven schools in the region.

With Scott’s gift, CIS of Cape Fear has been able to expand its programming, create additional jobs, and overall reach more students in New Hanover and Pender counties. This gift also means CIS of Cape Fear is one step closer to reaching its annual budget of close to $5 million, which all goes directly back into the program and community, supporting students and their futures.

For CIS of Cape Fear, Scott’s gift was a testament and validation to the strength of the nonprofit and its staff, as well as its program practices.

Scott, the ex-wife of Amazon founder Jeff Bezos, has been donating billions to organizations nationwide and internationally in the past couple of years.

“It’s easy to think of different groups struggling within the same systems as not only separate, but also opposing. Yet when we help one group, we often help them all,” Scott wrote on the social publishing platform Medium earlier this year. Scott typically does not speak publicly about the donations except for her annual or semi-annual posts on Medium. “Communities with a habit of removing obstacles for different subsets of people tend to get better for everyone.”

Her update post detailed more than $3.8 billion recently given to 465 nonprofits, such as Communities in Schools organizations in cities around the country as well as groups working in education, health, human rights, housing, and more.

Unbeknown to CIS of Cape Fear, Scott’s team did lengthy research into its programming, evaluating its data and financials and determining if it would be a strong investment or not, which is something they do with everything they fund.

Scott’s team looked at the entire CIS network and decided which affiliates they’d like the fund. From there, the national office was notified about which local offices were selected. In North Carolina, Cape Fear and a CIS in Charlotte received funding from Scott.

“For nonprofits, best practice is to have three to six months operating capital in reserve; this helps us get to that point, as well as funding expansion of programming,” Hicks says.

So far, with the help of Scott’s gift, CIS Cape Fear has added five new schools to its programming, as well as brought in additional staff at some of its existing schools.

Hicks says a large reason why Scott decided to make the donation to CIS is because of her focus on equity in education.

“Her given principles are equity in general and in anti-racism,” Hicks says. “So, a lot of what our work is trying to level the playing field for all of our students to make sure whatever zip code you live in, you can be successful in school. We will help break down any barriers to help you be successful in school. So, it was certainly looking through the equity lens that helped bring her attention to communities in schools.”

Looking ahead, Hicks hopes to increase community awareness of CIS of Cape Fear.

“We’re working with the most vulnerable kids in the schools that have the highest needs,” she says. “We’re doing it well with proven results and support for our work is ongoing. I don’t want people to see that, ‘Oh, we got $1.5 million from MacKenzie Scott. That’s amazing; they don’t need us anymore.’

“I want them to see,” Hicks adds, “that’s a testament to the quality of our program and know that it’s an ongoing, annual need to raise money.”

Correction: This story has been updated to correct Louise Hicks’ quote about much operating capital nonprofits should have in reserve.

Scott donated $84.5 million to Girl Scouts of the USA and nearly thirty of its local branches, including Girl Scouts-North Carolina Coastal Pines, which received $2.4 million.

Like the gift to Communities in Schools of Cape Fear, the designation to the local group came after research by Scott and her team, which selected specific councils to receive funding.

“This investment will help provide the resources that will allow Girl Scouts-North Carolina Coastal Pines to expand its capacity to provide innovative and relevant programs that address the most urgent needs of girls today and in years to come, while preparing them to be leaders in a future that will be full of change, challenges, and opportunities,” Lisa Jones, CEO of the council, which covers forty-one counties in Central and Eastern North Carolina, including New Hanover, Brunswick, and Pender counties, says in the October announcement. “We will invest in our strategic priorities such as fostering meaningful program innovation, making facility improvements at our iconic Girl Scout camp properties to complement year-round utilization while expanding accessibility and program elements at camps and service centers, and creating more equitable membership opportunities in communities that have been under-engaged.”