Burgaw BBQ restaurant sustains itself while aiming for expansion 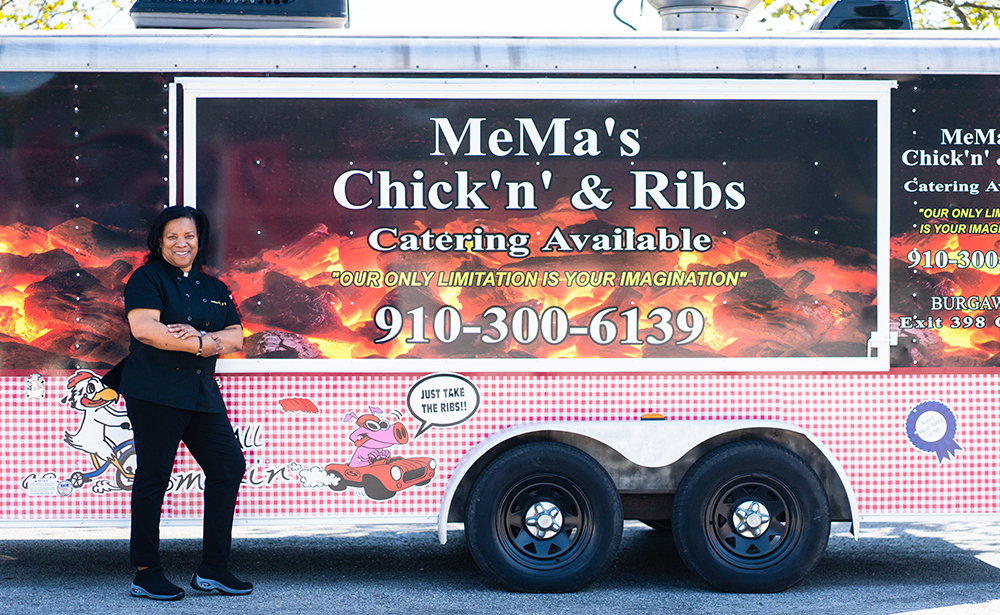 Customers. Community. Smoked barbecue. It’s a not-so-secret recipe for success at MeMa’s Chick’n’ & Ribs in Burgaw. In a short time since opening in a nondescript shopping center in 2017, MeMa’s has become a North Carolina barbecue landmark already too big for its proverbial britches.

The restaurant’s vast number of visitors in three years is showcased with a U.S. map filled with colorcoded pegs representing where customers come from. A rainbow of dots burst across Southeastern states, steadily expanding into new territories. Owner MYRA MCDUFFIE gestures to paper notes taped outside the map’s borders.

“We had no clue there would be international visitors,” she says. “France, Germany, Canada, Ukraine, South Korea, China, all the way over to Brazil.”

The proof is in the pudding, or in this case, the banana pudding pound cake. MeMa’s homemade desserts are as boundless as RUTH JOHNSON’s imagination and her catalog of family recipes for shortcakes, pound cakes, cheesecakes, and seasonal fruit cobblers. 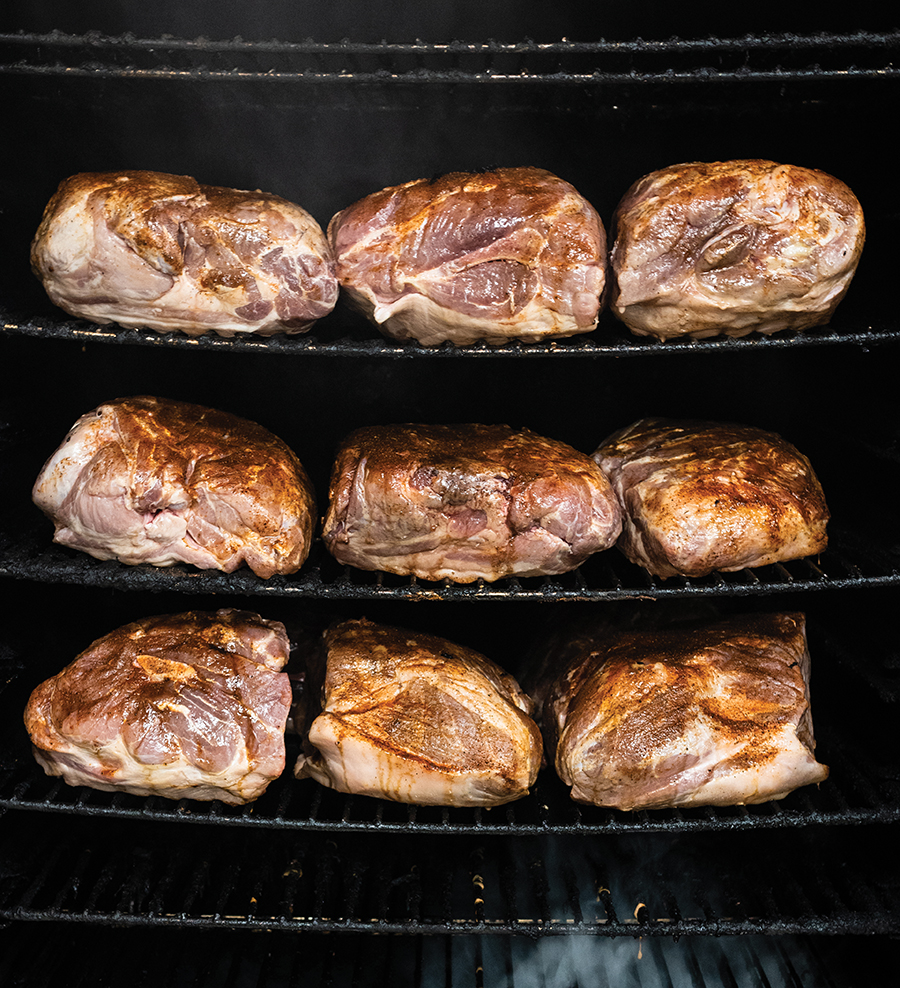 Johnson is one of two “MeMas.” The other is MARY MCDUFFIE, mother of chef JAMES MCDUFFIE. He and his wife, Myra, serve hundreds of pounds of smoked chicken, ribs, and Boston butts each week with housemade Southern sides, many of which are seasonal.

“When corn season is in we do about thirty bushels of corn (in a week) ’cause we never do frozen,” Myra explains while walking back to MeMa’s kitchen. “Then, there’s the collard greens, when in season. (Mary) goes to the field to pick her own collard greens to bring them back (to cook) here.”

MeMa’s also sources from area purveyors such as Greenville Produce, Cheney Brothers, and Carolina Beach’s Blackburn Brothers Seafood for their clams, catfish, and flounder. Any food left over from the menu each week is taken to Safe Haven of Pender on Sundays.

As a transplant from Brooklyn, Myra admits her Southern palate is not as refined as her North Carolina-native husband’s. As a Marine, James runs his kitchen like a well-oiled machine; when a plate goes to the window “it should be perfect.” His food, however, represents comfort and family. The youngest of three, James says he and his sisters took turns cooking while growing up.

“My middle sister used to switch it out, and she thought we was Italian and she’d cook pasta all the time – and my older sister couldn’t cook,” he quips. “And, every time my mom was cooking, I was always the one in the kitchen. … As you do it more and more, you learn more and more. So, I just took the good base that my mother gave me. And, we just turn it up a notch.”

James’ barbecue earned the No. 8 spot on USA Today’s 2019 list of Best BBQ in North Carolina. He uses hickory and applewood for his indoor smokers, which can fit forty chickens, forty-two racks of ribs, or twenty-six Boston butts at a time. “And, before COVID, we were using that capacity every day,” James notes. “It’s coming back, but it’s challenging.” 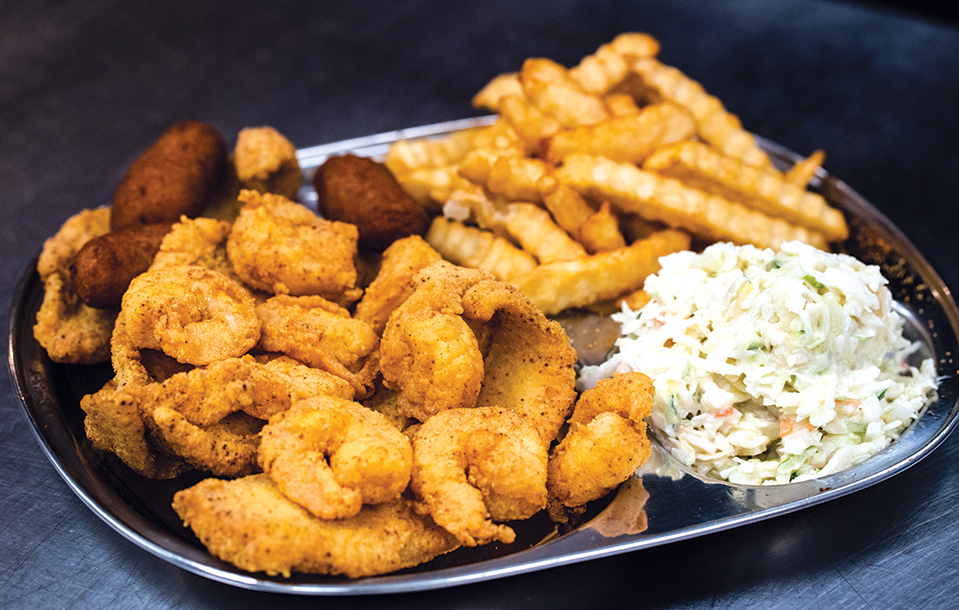 Pre-COVID, the McDuffies put everything they had into purchasing land for a 2,000-square-foot multipurpose facility they call “The Creek at Burgaw,” located across the street from Walmart. There, James will have three to four times the smoker capacity in his new kitchen.

Two years in the making, The Creek will house a new MeMa’s restaurant with expansive indoor and outdoor seating, three event spaces, a commissary kitchen for area food trucks, and an observation deck where visitors can see the McDuffie team make their signature barbecue sauces.

“When you walk in, it’s going to be like a Cracker Barrel feel,” Myra says. “We’ll have our (signature metal) plates and Army/Marine paraphernalia; MeMa’s aprons, koozies, cutting boards, everything. Then you’ll be able to see us manufacture the barbecue sauce and have tastings.”

Myra and James estimate The Creek at Burgaw will bring thirty new jobs when it opens in 2021, including two more sous chefs, waitstaff, and catering staff, as well as general employees.

Recovering from its COVID closure and going from operating sixty seats to twenty-eight, MeMa’s has lost funding and time on the project. Not to mention about 50% of business comes from catering, of which only nine of thirtysix bookings were recovered from April to September.

This ultimately led the McDuffies to start a GoFundMe page to make up for lost sales. All donations go directly to The Creek at Burgaw project, which will house a “Gratitude Tree” with engraved metal leaves ($1,000), doves ($2,500), and bricks ($5,000) commemorating top-tier donors.

MeMa’s family hopes to open The Creek at Burgaw by the time their current lease ends in May.

“The bank is asking for $400,000, and we’ve collected over $150,000,” Myra says. “We have GoFundMe up, but a lot of people have been bringing in and mailing in checks here, and I’m so grateful to our community for contributing.”