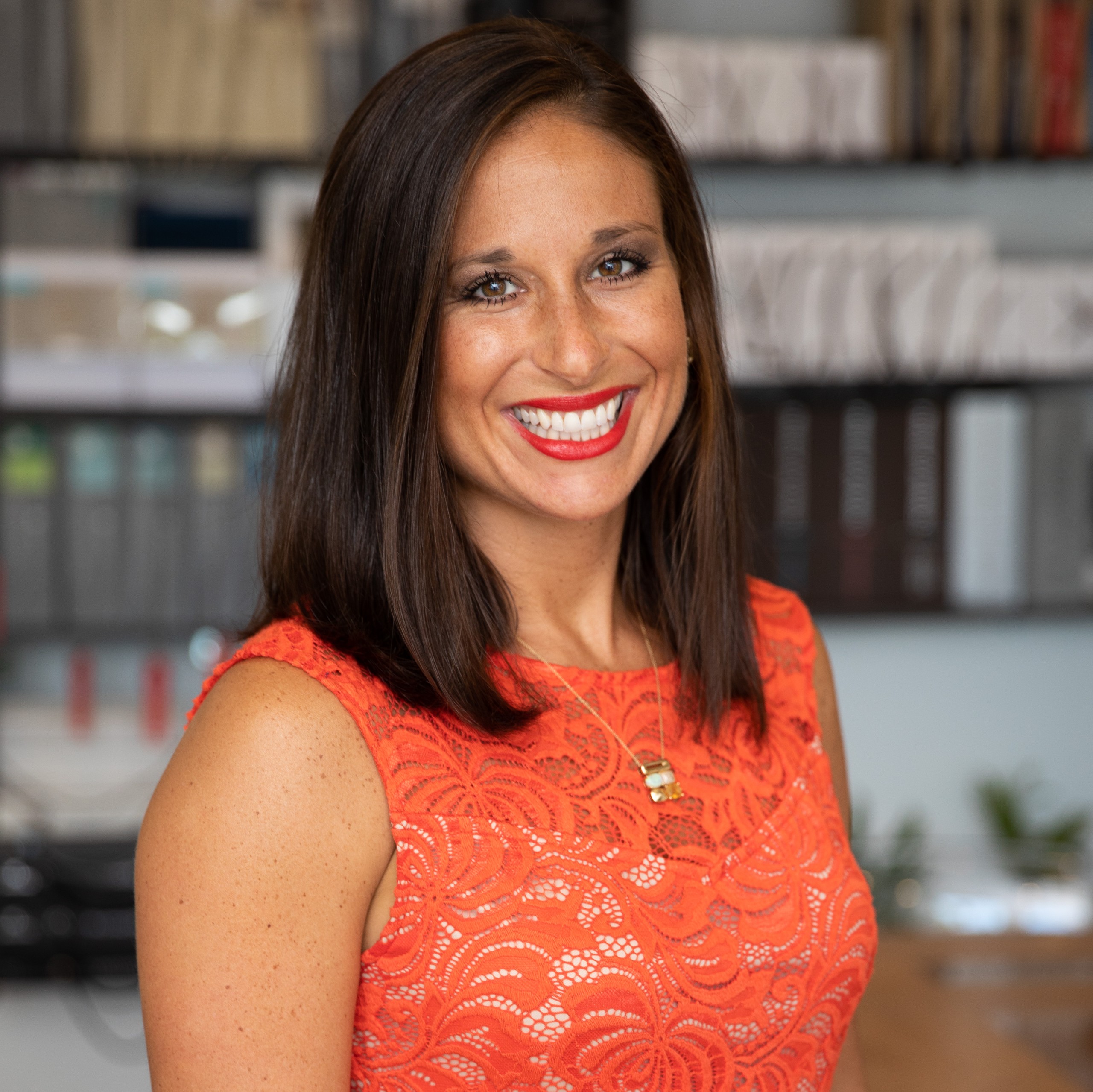 On the eve of the North Carolina lockdown, interior designer DANIELLE SAINTARD VALIENTE was on the River Place job site wearing a flowing, neon green and opaque white parachute coat dress with black lace-up wedges. Her energy level was so high she could have picked up a jackhammer and started breaking rock and asphalt.

Instead under the dome of a dove gray hard hat, she maneuvered the scaffolding with grace and ease and pressed the elevator button taking her to the top floor where she met up with her project architect Rob Romero to walk the extreme upfit of Cape Fear Vista, the name given to the structure’s top floor penthouse overlooking all downtown historic district to the east and the Cape Fear River basin to the west.

The penthouse is one of 25-35 projects Saintard-Valiente was juggling that day. At 32, hers is one of the busiest single-owner design shops in Wilmington. It’s no coincidence she named her firm, Port City Design Group when she opened with some seed money, in 2014.

The Massachusetts native who rolled into town in 2010 could not wait to graduate college and the day after she earned a bachelor’s degree, with a concentration in sustainable design, from Endicott College — one of only five accredited interior design schools nationally at the time — she packed all her belongings into a vintage, champagne-colored Plymouth Neon, and headed south.

Sixteen hours later, “when I pulled into my apartment complex,” she recalls, “my car stopped and never started again.”

It was meant to be.

Why she fled her home state and never looked back is a bitter pill to swallow, yet it is also the reason she became a designer in the first place.

“I remember exactly where I was and what I was doing,” she says. “I was 13 and I was at my cousin’s house and we were watching ‘Trading Spaces.’ The concept of a home didn’t exist for me. Home was torture.”

With an alcoholic father, diagnosed with ALS when she was 10, her childhood home had been turned into a hospital setting. Her mother, a correctional officer at an area prison, was physically and emotionally abusive.

“My brother and sister and I were trying to get into foster care. We called the cops daily. We would show them the bruises. Mom . . . always had an answer.”

“I thought: ‘Whoa. This is a thing.’ It was my first time, knowing why people loved their homes. I knew then: ‘I’m gonna do that for other people. I’m gonna give people what I didn’t have,’” Saintard Valiente says.

Today, the sense of home she brings to others ranges broadly from large and small new designs and renovations of both residential and commercial interiors. Saintard Valiente wears many hats – lead designer, project manager, and product entrepreneur.

Some projects evolve as hybrids. An extreme makeover of Perry’s Emporium at Barclay Commons is a case in point. Observing the one-year anniversary of its softly re-opened store in September, Saintard Valiente transitioned Alan Perry’s beloved interior while honoring a few of his favorite things. 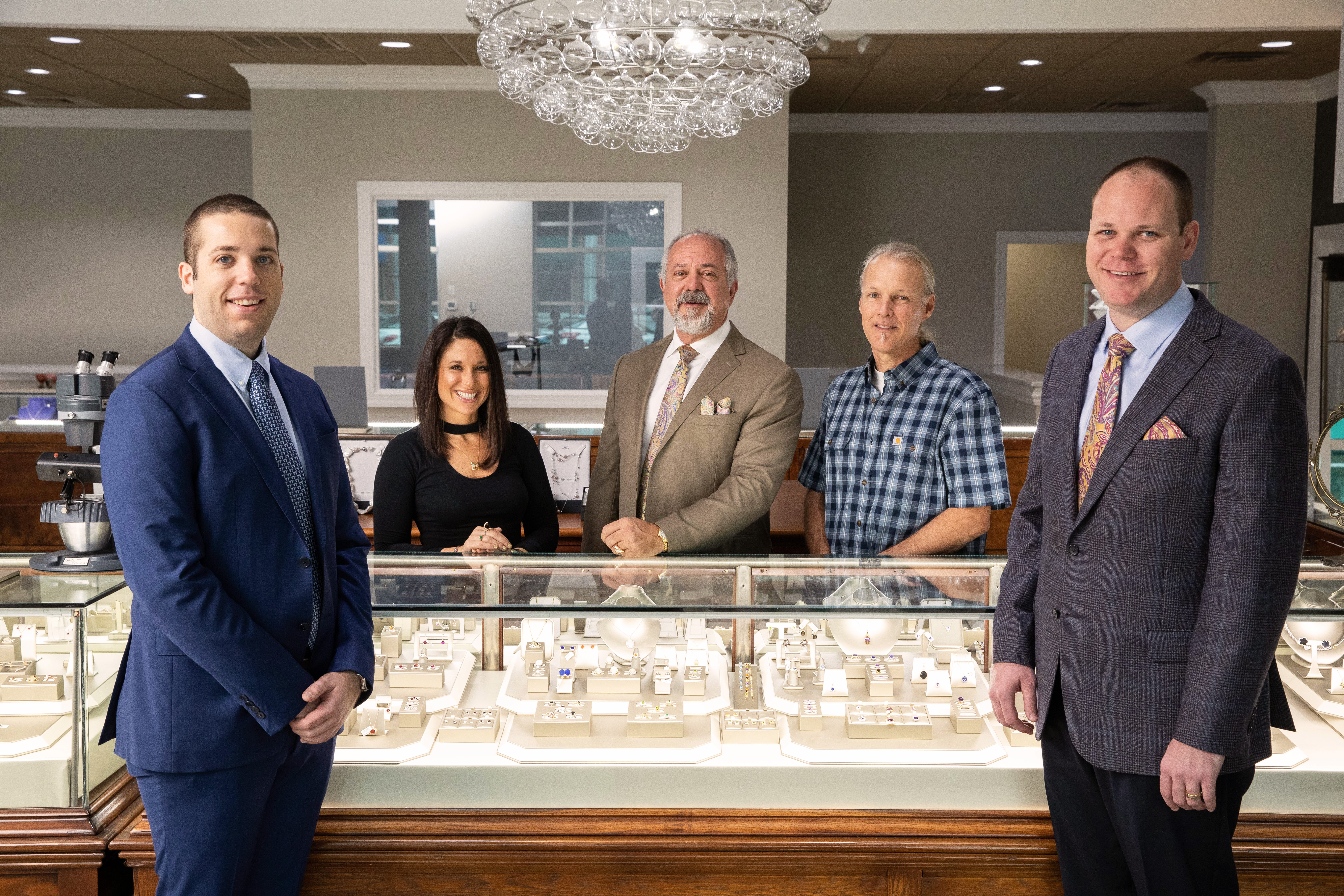 Lighting fixtures and wallcoverings were jewelry inspired with cascading glass, teardrop crystals and iridescent shimmering patterns reminiscent of opals and pearls alongside metallic shades of silver, champagne and rose gold.

A brighter and cooler glow replaced all the warmer hues in the ambient lighting and cases. Point of sale counters were refinished in a charcoal gray with marble veined quartz countertops. The store’s original carved mahogany doors were incorporated into the redesign and were used to divide intimate booth seating in the consultation bistro.

During the intensive four-month upfit, half of the 7,500-square foot store — that had previously been hidden from view, where polishing and cleaning, repairs, or takes, and resin casting operations took place –was opened up. Now, jewelers work from six benches separated from the showroom by a wall of glass.

The result is a living, interactive experience. And by increasing their footprint, the Perrys decreased their inventory, boosting their profit margin.

Empire is a nail polish line inspired by interior paint tints with its own Etsy shop that includes a nonprofit collection that echoes many of the Port City’s leading fundraising causes. Hygge is a cozy candle line and Special Tee? You guessed it! A t-shirt line featuring a collage of images that resonate with Wilmington. Both product lines are also available on Etsy. She has written and published a trio of children’s books inspired by her dog, Cooper, nicknamed Smunchkin. She serves on the leadership team of her Toastmasters club, the board of the Cape Fear Literacy Council and supports The Carousel Center, the area nonprofit that assists child victims of physical and sexual abuse, for which she started an annual fundraising event.

“I’m high energy,” she laughs, “I get bored with too little.”