The facts, and just the facts, about being a crime scene investigator 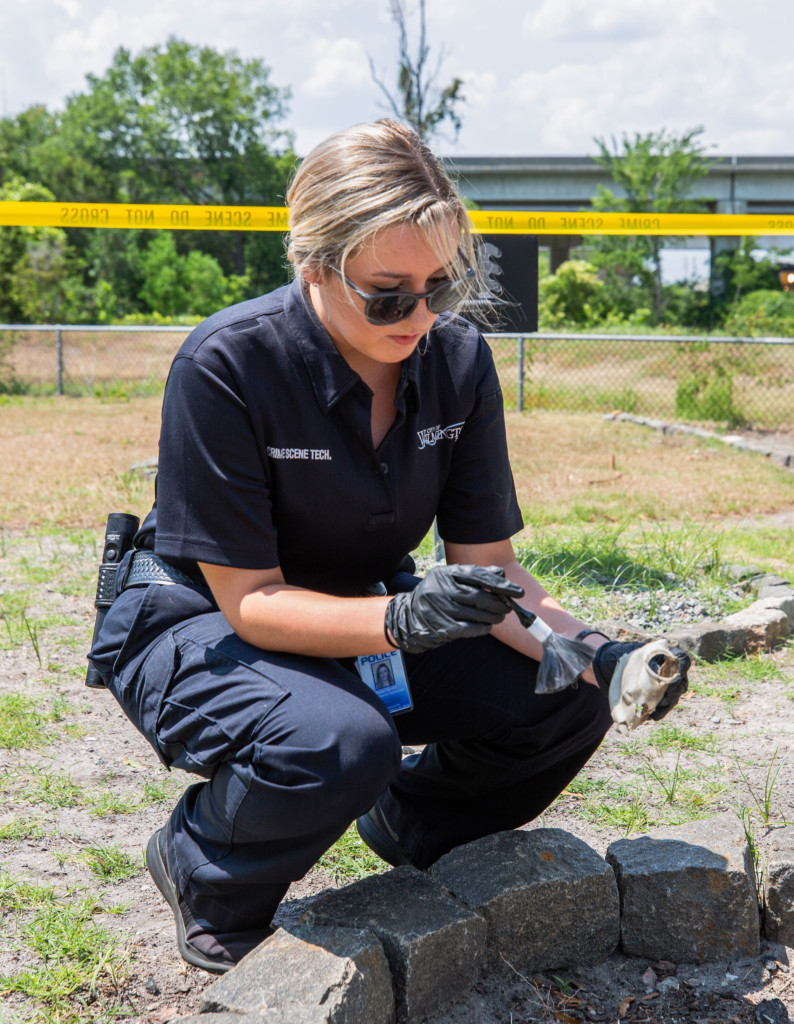 There’s been a terrible crime. The crime scene investigators are called in over scratchy dispatch radios. On-site in seconds, they retrieve a hair sample and a drop of blood near the crime scene, bag it, and shout, “Take it to the lab, stat!”

Moments later, in TV time, the perpetrator is pursued, chased over rooftops until (crescendo), all parties sweating, the suspect’s cuffed and hauled off. Everything’s neatly wrapped in a tidy ending at the show’s conclusion. 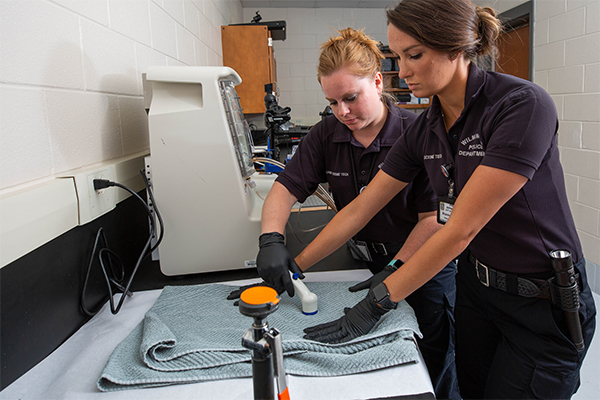 Le Senechal says it wasn’t intentional to have a mostly female unit, but the field is female-dominated, and most applicants are women.

“I think one of the most important qualities in a crime scene investigator is the ability to think outside the box,” she says. “Every scene is different, so a good CSI takes the standard methods and processes and applies them to each particular scene … Another trait I search for in a CSI is flexibility. This job is not glamorous as portrayed on television. We don’t have unlimited time, equipment, training, and supplies.”

In addition, Le Senechal became a certified senior crime scene analyst, the first in the department to do so. She started working with the WPD as a crime scene technician in 2011 and became supervisor in 2015. 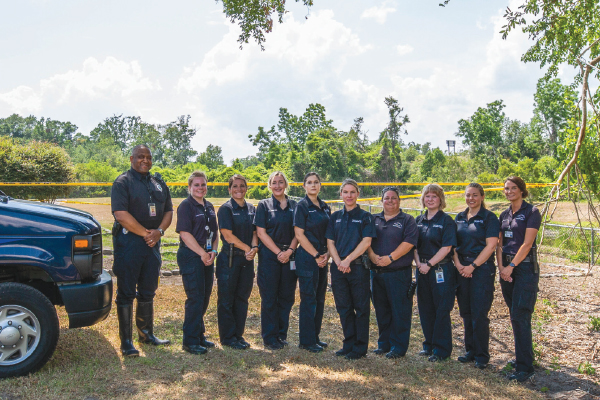 The female members of the WPD unit are KIM BREEDEN, JACLYN SMITH , SARAH PLANT , SABRINA STANLEY , ALLAN WALKER , COURTNEY O’KANE,  MINDI FISHER, and  MORGAN BENTON.  ROBERT THOMAS is the only male team member and a sworn officer; the rest of the unit is comprised of civilians.

Many of them agree that the crime scene investigator shows on television may show some aspects of their lives, but there are differences.

“All of the television shows portray that the work is done extremely quickly,” Sarah Plant says. “It’s not. Our duties take time and attention to detail. There are so many different methods we use for processing that aren’t regularly shown or even explained properly.”

It may take a year to get some test results.

Fisher talks about the CSI effect, which has made testifying in court more difficult than it used to be because of jurors’ expectations of the way the job is done is based on the shows. They may feel a CSI hasn’t done her job properly if it doesn’t match their TV impression of how it should be done. 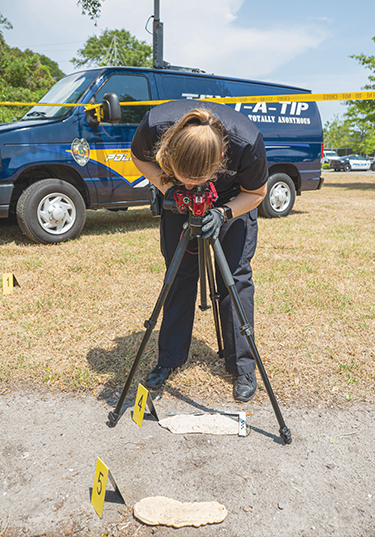 “When in reality, it’s the TV show where they learned their information that is wrong,” Fisher says.

While unit members agree there is no typical day on the job, Breeden says, “Where it is different, in short, is the show combines all aspects of a crime scene investigation into one unit,” with TV CSI units photographing the scene, looking for fingerprints, looking for and collecting evidence, and taking notes and crime scene sketches, as well as conducting all lab analysis, interviews, and making arrests.

“In reality, it takes multiple people – and possibly agencies – each with different roles,” Breeden says. “A CSI is only responsible for crime scene processing. Forensic lab technicians (either within the agency or at a state/ private lab) conduct the analysis of evidence such as hairs and fibers, fingerprints, firearm and tool marks, shoe prints, DNA, drugs and more. Medical examiners are responsible for examining and determining the cause of death of a person, and police officers and detectives are in charge of the investigation and making arrests.” 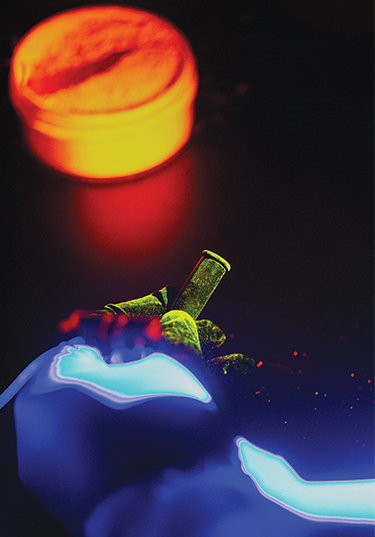 The preparation for entering the field and the time Wilmington’s CSI unit members have spent working in the field varies. For instance, Breeden has been a CSI for nearly eighteen years, with fourteen at the WPD; she also worked for the Winston-Salem Police Department. On the other hand, this is Stanley’s first CSI job – she’s been with the department for almost two years.

Plant knew she wanted to be a forensic scientist since she was in high school.

“I took a few basic classes and was completely fascinated,” she recalls. “I read textbooks and watch documentaries in my free time.”

Plant graduated with a bachelor’s degree in forensic science from the University of New Haven in Connecticut, home of the Henry C. Lee College of Criminal Justice and Forensic Sciences, named after the famed forensic scientist who’s consulted on 8,000 criminal cases.

O’Kane says she became a CSI because she wants to help people and administer justice. 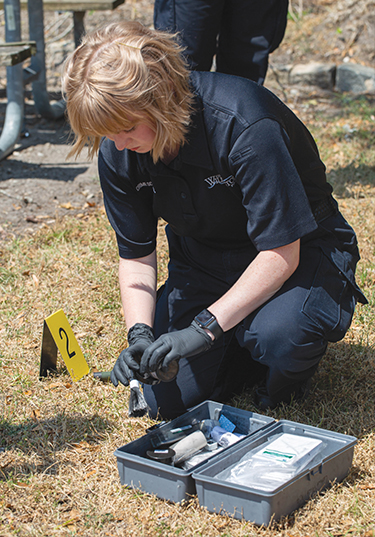 “What attracted me to this sort of work is the fact that I get to work both in the field and the lab setting,” she says.

Unit members say when they tell strangers what they do, most think it’s really cool and are fascinated and full of questions. One of the top questions: What’s the wildest thing you’ve encountered on the job?

Stanley says much of that fodder comes from the calls they receive over the radio, “from ‘robot light eyes in the woods’ to someone calling the police to a salon because a stylist messed up their hair.”

“I have been dispatched to a house,” Smith says, “where the complainant believed they may have found a jar full of human fingers, though after examining the contents, it was determined the fingers were actually props.”

Benton says that while many people hear about being a CSI, they don’t know the reality of the job and haven’t met an actual CSI. In reality, CSIs wait to be summoned to a scene, process the scene, and write and revise reports for much of their time on the job

“I also think a lot of people think I just see horrible thing after horrible thing and that it must be really hard,” she says. “While there are times where you do see things that are hard, it’s not always an intense type of scene.” 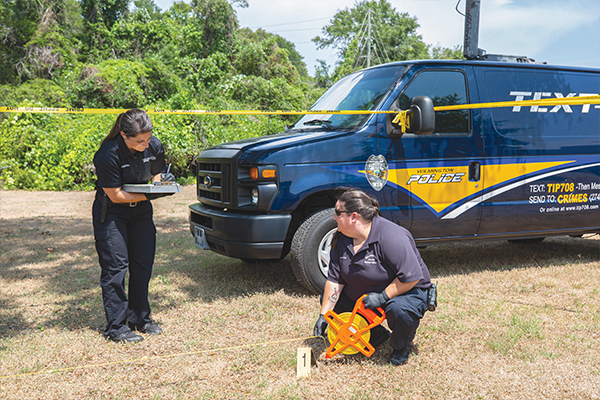 Fisher reflects on why she does this work.

“When I develop that fingerprint that links a suspect to the crime they committed, the feeling is unlike any other,” she says. “It reinforces why I entered this field in the first place. I am in a career where I can make a difference and help make this world safer for those living in it. I absolutely love it.”

Walker says the more they talk to people while out on scenes or even to their own friends and family, the more they are likely to educate them about the life of a CSI.

“Things in our world don’t produce results in thirty minutes,” she says. “There are no magical machines. These things can take time, but you better believe we love every minute of it.”