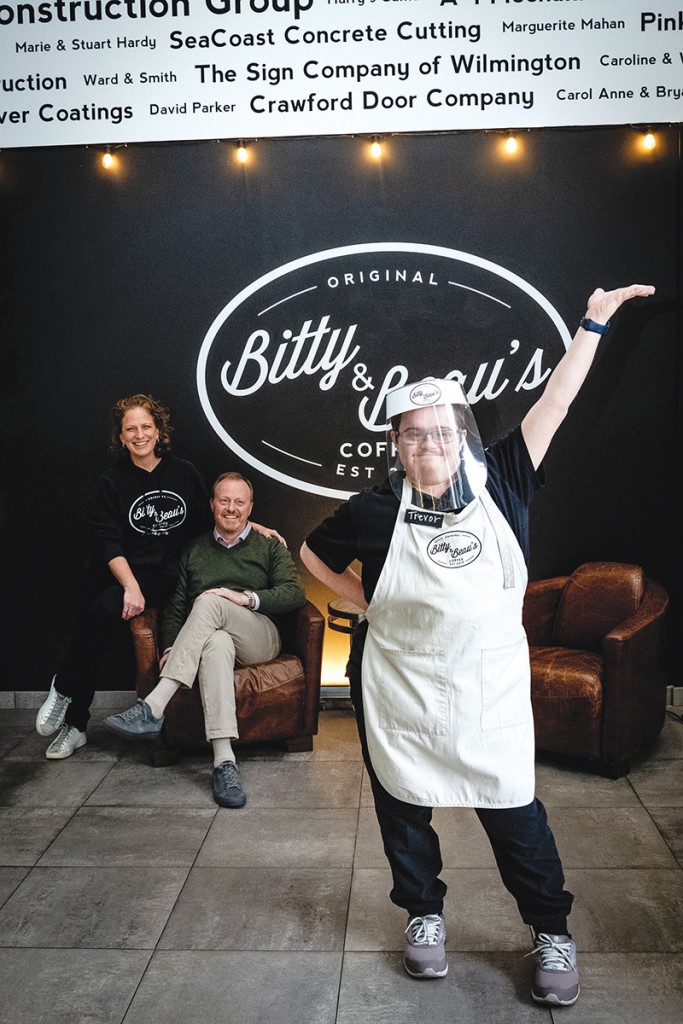 Just a week after celebrating Bitty & Beau’s fifth anniversary earlier this year, MATT DEAN was already thinking ahead to the next five years.

He envisions Bitty & Beau’s having locations in Japan and Hawaii, two locations he’d gladly help establish. Dean, who was among the first employees hired, serves as the company’s director of first impressions and is tasked with setting the bar for customer service among his fellow employees.

But, Dean does not think of his co-workers as such; he thinks of them as family.

“Bitty & Beau’s feels like a second family to me,” Matt Dean says. “This job has changed my life.”

Dean is one of 120 employees with intellectual and developmental disabilities who work for Bitty & Beau’s Coffee’s four corporate locations.

Founders AMY and BEN WRIGHT set out not only to provide job opportunities for a community that’s severely underrepresented in the workforce but to change perceptions about their potential.

In just five years, they have grown from a 500-square-foot building on Wrightsville Avenue to a 5,000 square-foot headquarters on New Centre Drive, with additional locations in Charleston, Savannah, and Annapolis. With franchise agreements for numerous new locations set to open this year in cities such as Charlotte, Washington, D.C., and Boston, the company expects to double its number of employees by year’s end.

“By the time we were six months old, we had gotten so much interest from people wanting to be a part of bringing us to their city that we decided to franchise,” Amy Wright says. “We started to take hundreds of applications, not knowing that we didn’t yet have our systems in place to do so.”

She says it wasn’t until the start of the COVID-19 pandemic, when all their stores were closed, that she and Ben had the time to put together a solid franchise plan. Having opened four stores by the start of 2020, and with hundreds of inquiries still pouring in, the Wrights felt confident that despite the pandemic, they were ready to move forward with this next phase.

“There’s this vision, and there’s momentum behind it,” Amy Wright says. “And, we wanted to create more jobs and more places where people can have this transformative experience. Now that our systems are in place, we feel confident that we can teach other people how to do this. We feel very fortunate that during what was a very dark 2020, we were able to use that time to think and to prepare for what we wanted to happen in 2021.”

While the Wrights say their model will work anywhere, they’re looking for markets that are destinations – where the shop itself becomes a part of the experience of visiting that city.

“This is such a dire epidemic in our country, that these individuals are so underutilized and don’t have the same opportunities as everyone else,” Amy Wright says. “We have a vehicle here for changing that, so our focus is on how we can continue to use the momentum that’s already built up over the past five years to reach more people.”

The Wrights handle the vetting process for potential franchisees from start to finish, having made the decision not to utilize a franchise broker. It’s important to them that they make a personal connection with potential franchisees, even if it must initially be done virtually in light of the pandemic.

Amy Wright says people have different reasons for wanting to open their own Bitty & Beau’s.

Some have family members with a disability, while others simply want to be a part of the company’s mission. A background in coffee or retail is not essential, as Amy Wright admits, she learned along the way.

If the passion and dedication are there, the rest can be learned. AMIE and VIC CENNAMO, of Charlotte, are the parents of an eighteen-year-old son with autism, as well as a fourteen-year-old daughter.

They first learned of Bitty & Beau’s through social media and friends within the special needs community. They visited three locations last year, and when Bitty & Beau’s announced in August they would begin franchising, they felt it was perfect timing to open one in their hometown.

“As our son approached high-school age, we worried about his future, especially given the grim facts about employment and those with disabilities,” Amie Cennamo says. “He’s now in his senior year, and we couldn’t think of anything we would be more passionate about because it’s something that our son can be a part of, too.”

The Cennamos say they’re excited to be among the first franchisees selected by the Wrights to represent and help grow the brand.

“The response we have received from the community has been overwhelming and extremely exciting,” Amie Cennamo says. “We have heard from so many people that had hoped for Bitty & Beau’s to come to Charlotte and want to know how they can be involved or how they can support us. This is how we ultimately help the world see the value of people with disabilities, in the workplace and beyond.”

Editor’s note: This is an updated reprint from WILMA sister publication WilmingtonBiz Magazine’s new issue. To read more and the rest of the issue, go to WilmingtonBizMagazine.com.