From idea to helping patients 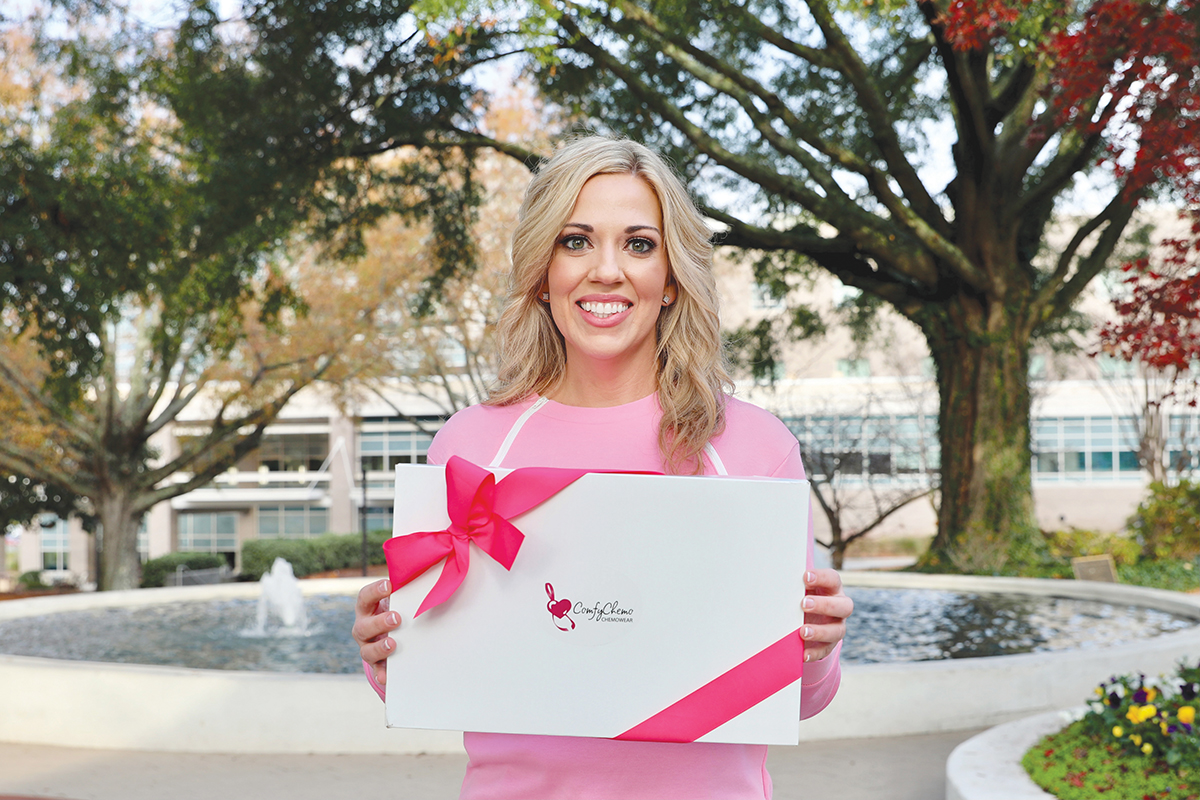 When registered nurse COURTNEY WILSON moved from working in an in-patient to an out-patient oncology setting, she found herself front and center at a busy chemotherapy infusion room. There she saw a need, and soon after Wilmington-based company ComfyChemo was born.

ComfyChemo produces apparel with a specific use in mind – to make cancer treatment sessions more comfortable. The distinctive zippered shirts are a win-win for patients and nurses.

At the center where Wilson began working, patients received cancer drug treatments through “venous access devices,” or ports, that are surgically implanted in a person’s upper arm or chest. Wilson noticed that when accessing a patient’s port – through a sterile technique – a patient’s clothing could pose a problem.

That’s when the seed for ComfyChemo clothing was planted.

“Patients would end up with stretched-out collars from having to pull their shirts down, shirts needing to be removed completely or partially in order to gain access to the port area, and sometimes even left people feeling overexposed in our wide-open infusion room,” Wilson explains. “I started noticing a few patients who would come in wearing shirts in which they had taken scissors and made cuts or even large holes in order to make getting to their port easier.”

That sparked Wilson’s idea: create unique shirts that made accessing a patient’s port less stressful – a “treatment-day uniform,” so to speak. The goal was to improve patient dignity and comfort, ultimately refining the IV treatment process.

After mentioning the idea to a friend, oncology pharmacist GREG DOWLESS, the two did some research and found that no such type of shirt truly existed. That’s when Dowless encouraged Wilson to bring her idea to life.

Determined, Wilson went to work. She spent countless hours sewing, cutting, and experimenting on shirt designs – until, Wilson says, she finally found the solution. “A zipper strategically sewn into the chest at a 45-degree angle beginning at the collar opens the chest area up exactly as it should for sterilizing and accessing the port with ease while maintaining privacy and comfort.”

Wilson perfected her zipper-sewing skills, and from there, she and Dowless co-created the brand ComfyChemo.

Wilson says she’ll never forget the first ComfyChemo apparel order, five shirts she made by hand, thoughtfully gift-packaged, and shipped to a woman in Pennsylvania. The customer wrote a letter back thanking Wilson, with words of appreciation and support.

“(Her) words have stuck with me all these years,” says Wilson. “(She) had no idea she was our very first order, and she will never know just how much her belief in me and my idea impacted me – another prime example of the amazing love found in this special patient population.”

As awareness of ComfyChemo shirts grew, so did the company’s number of orders. Due to demand, hand-making the shirts was no longer feasible, so Wilson decided to find a manufacturer.

The challenge, she says, wasn’t an easy one. Many of the samples she and Dowless received from manufacturers didn’t meet their standards.

“We were blessed to find our amazing manufacturer who we still work with today and has worked closely with us through the years to optimize our design and ultimately has allowed us to provide a line of apparel that we can wholeheartedly stand behind for its excellent quality, comfort, and affordability,” Wilson says.

Today, ComfyChemo shirts are mass-produced and are worn by patients nationwide, Wilson says. They’re also available in a number of larger cancer centers including Duke University Medical Center – a long way from “a pair of scissors and a vision,” she adds.

To make kiddos’ cancer treatment days a bit brighter, a children’s line is also available. It’s also important to the company to give back.

“We also work closely with several nonprofit organizations across the country in a multitude of ways, including fundraisers that provide shirts to children at no cost,” Wilson says.

An expansion is also on the horizon. The company will partner with an e-commerce distributor to bring its chemo-wear apparel to those in Canada, too.

What’s more, ComfyChemo will be offering more options for chemotherapy patients whose ports are in their upper arm, instead of their chest. Wilson is also looking forward to the launch of a sister line called ComfyHemo, designed for those undergoing hemodialysis.

“Day by day and patient by patient,” she says, “we will always strive to provide a little extra comfort and sunshine on treatment days and continue towards our long term goal of ‘making each treatment day Brighter’ for every patient bravely taking on whatever battle they are facing.”